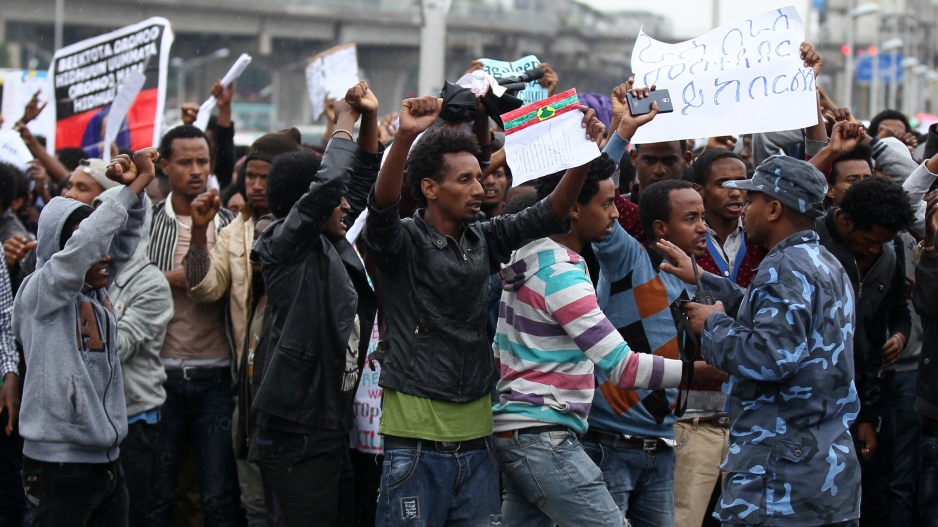 A policeman attempts to control protesters chanting slogans during a demonstration over what they say is unfair distribution of wealth in the country at Meskel Square in Ethiopia's capital Addis Ababa, August 6, 2016.

ADDIS ABABA – Several dozen people were killed in weekend clashes in Ethiopia between police and anti-government demonstrators, as the authorities brutally suppressed a new wave of unrest in two key regions.

Protests swept the vast state of Oromia and even reached the capital Addis Ababa, a rare event in a nation with a government considered among the most repressive in Africa.

"We have reports of between 48 to 50 protesters killed in Oromia. This death toll might be higher because there were a lot of wounded," said Merera Gudina, leader of the opposition Oromo People&39;s Congress.

A diplomat confirmed that 49 people were killed across Oromia, which straddles central-western Ethiopia, and Amhara, in the north.

Amnesty International put the death toll at 97, with 67 killed in Oromia and 30 in Amhara on Saturday and Sunday.

The government, which has not given a death toll, said in a statement that "illegal" protests had been organised by "foreign enemies ... in partnership with local forces".

Among the towns worst hit by the violence was Bahir Dar, the capital of the Amhara region where at least 27 people died, while 15 were killed in Nekemte, western Ethiopia, the diplomat said.

Several thousand people had gathered in Bahir Dar on Sunday.

Deaths and detentions in Ethiopia as protests flare. OromoProtests https://t.co/afVoPZjOAJ via @rakidi @AJENews

"They appear to be low level, quite disorganised protests scattered all around," the diplomat told AFP on condition of anonymity.

"The brutal response of the government risks provoking more anger and making it worse."

The authorities have since Friday blocked access to social media, the activists&39; key channel for such rallying calls.

With at least 27 million people, Oromia is the most populous of the country&39;s federal states and has its own language, Oromo, distinct from Ethiopia&39;s official Amharic language.

Oromia has been regularly convulsed by protests since the end of last year.

The Amhara protests began more recently but have quickly attracted massive numbers of supporters, but in both regions the government is swift to blame foreign "terrorist groups", usually pointing the finger at neighbouring Eritrea.

Unrest has also increased in recent weeks in Amhara after the attempted arrest of local leaders who opposed a government move to merge two neighbouring districts.

The vast majority of the country&39;s almost 100 million people are either Amhara or Oromo.

Police were also out in force on Saturday when about 500 people gathered in Addis Ababa&39;s main Meskel Square, shouting slogans such as "we want our freedom" and "free our political prisoners".

Although no one is thought to have been killed in the capital, security forces brutally broke up the rally.

The protesters have different grievances but are united by their disaffection with the country&39;s leaders, who hail from the northern Tigray region and are regularly accused of discrimination against the rest.

Those in power are members of Meles Zenawi&39;s ex-rebel group turned political party, the Tigrayan People&39;s Liberation Front (TPLF). Meles ruled with an iron fist after toppling dictator Mengistu Haile Mariam in 1991 until Hailemairam took over in 2012.

A previous wave of protests earlier this year was sparked by a since abandoned plan to expand the capital into outlying Oromia farmland, which was followed by a swift crackdown.

Prime Minister Hailemariam Desalegn had on Friday announced a ban on demonstrations which "threaten national unity" and called on police to use all means at their disposal to prevent them.

"These crimes must be promptly, impartially and effectively investigated and all those suspected of criminal responsibility must be brought to justice in fair trials before ordinary civilian courts without recourse to death penalty."