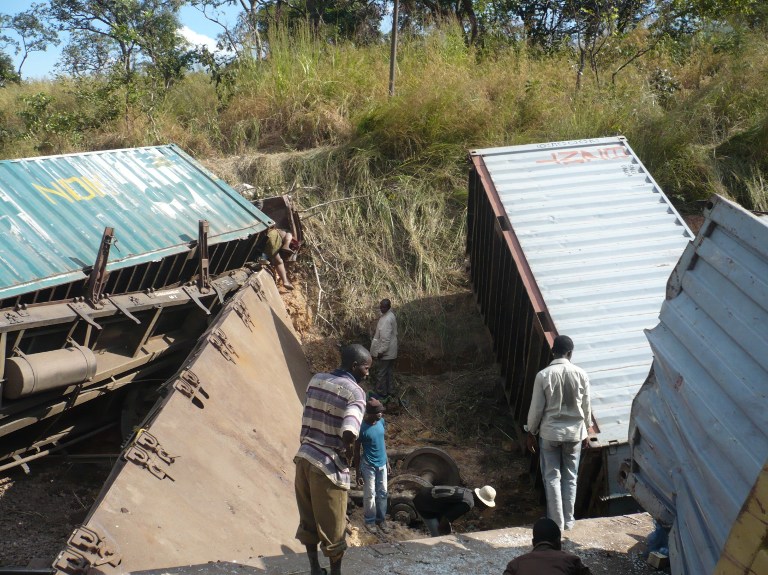 This picture taken on April 22, 2014 shows men standing by derailed wagons after a train sped off the rails 65km north of Kamina, in the southern province of Katanga, Democratic Republic of Congo.

LUBUMBASHI, DRC – Up to 33 people were feared dead Sunday in the Democratic Republic of Congo after a freight train carrying fuel plunged into a ravine.

The UN&39;s radio Okapi said there had been 33 fatalities with an unknown number of others injured or burned in the accident in the province of Lualaba.

Jean-Marie Tshizainga, the minister of mines of Lualaba province gave a toll of eight dead and several others injured.

"The toll could be significantly higher," he told AFP. The train, in which the victims were travelling illegally, was running between the country&39;s second city of Lubumbashi and Luena.

The train was transporting 13 oil tankers and derailed while climbing a slope near the station of Lubudi. It fell into a ravine and the tankers caught fire, radio Okapi said.

"It&39;s a freight train that derailed and it wasn&39;t supposed to be carrying passengers. If there were people on board, we consider them to be illegal travellers," said Sylvestre Ilunga Ilukamba, a senior official from the national railway company.

The region has witnessed several deadly train accidents. In 2014, a freight train derailed killing 74 people and injured 163, according to officials but the Red Cross said up to 200 corpses had been buried.

Another train accident in July 1987 near the Zambian border killed 150 people after crashing into a truck.