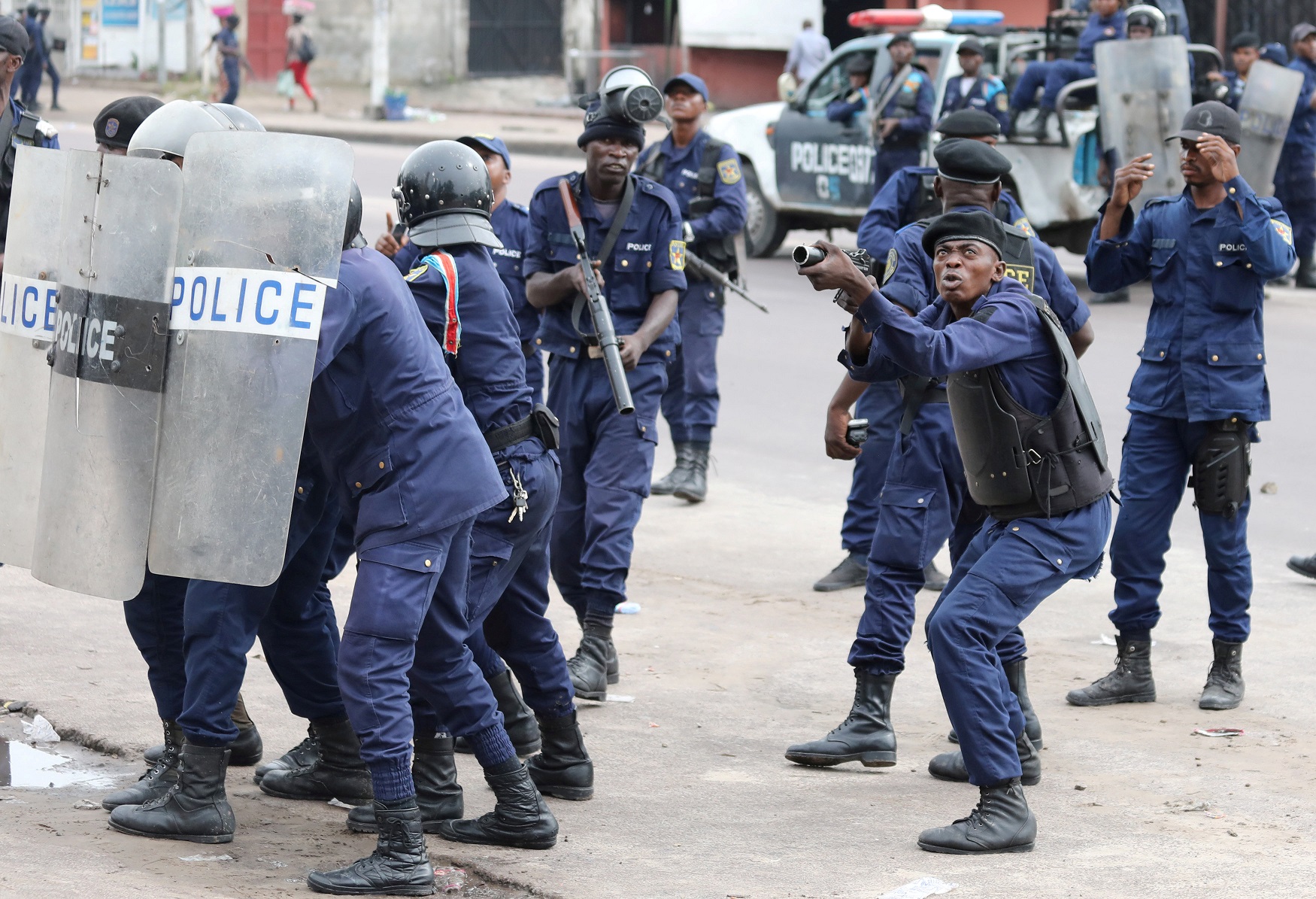 Policemen react after a protester threw a stone from Notre Dame Cathedral compound in Kinshasa, Democratic Republic of Congo, February 25, 2018.

KINSHASA – Security forces in the Democratic Republic of Congo&39;s capital Kinshasa shot dead an anti-government protester and wounded two others during church-led demonstrations against President Joseph Kabila on Sunday.

Catholic and evangelical churchgoers across Congo had been meant to take to the streets following Sunday services.

However, armed security forces surrounded Kinshasa&39;s main churches and blocked roads, preventing most demonstrations from starting and in some cases using teargas and gunfire to disperse them.

Witnesses who brought the body of the slain demonstrator to Kinshasa&39;s St. Joseph Hospital said he was shot by police outside the St. Benoit Catholic church in the Lemba neighbourhood.

Police shot the two others as they marched in the Masina neighbourhood, witnesses said.

In power since 2001, Kabila struck a deal in December 2016 with the main opposition bloc to stay on after his elected mandate expired on the condition elections were held by the end of 2017.

Government authorities missed that deadline and the vote is now scheduled for this December, though election officials have hinted that polls may not be possible even then due to financial and logistical constraints.

"Our people no longer believe in the political will of our current leaders to ensure a peaceful transition of power," one of the main organising groups wrote in a statement ahead of the march.

Church groups have become the main opposing force to Kabila as political opposition parties have been hobbled by infighting or seen their leaders forced into exile.

As with previous protest marches, internet, mobile data and phone messaging were cut across Congo early on Sunday.

The crackdowns have drawn international condemnation and stoked fears Congo could be sliding back towards the kind of war in which millions died at the turn of the century.

Kinshasa police commissioner General Sylvano Kasongo had announced a goal of "zero deaths" during a review of police on Saturday.

Reached on Sunday, Kasongo said he could not comment on reports that security forces had fired on protesters.

In the northern city of Kisangani, several witnesses reported that police used teargas and gunfire to disperse marchers. It was not clear whether the security forces were firing at demonstrators or into the air.

"Even now the shooting is continuing," said one Kisangani resident, who asked not to be identified. "I don&39;t know if anyone&39;s been hurt, but I arrived back home without my family ... Everyone fled in a different direction."

A heavy security presence was also visible on the streets of Goma, the largest city in eastern Congo.