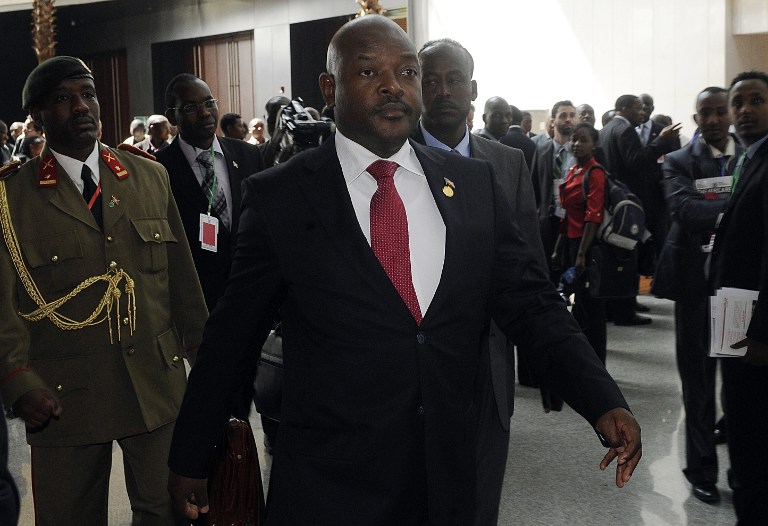 File: Burundi's President Pierre Nkurunziza approved a controversial media law that infringes on press freedoms, much to the dismay of media watchdogs and rights groups.

BURUNDI - Arrests, harassment, a clampdown on free speech: with less than a year before elections in Burundi, critics say the government is doing all it can to clamp down on political challengers.

The president of the Front for Democracy (Frodebu) party was sentenced to one year in jail for slander, after what he calls a "political trial" designed to remove him from the running ahead of the June 2015 polls, this year.

President Pierre Nkurunziza is "working to destroy the opposition, and he is doing it well," he said.

"All credible opponents are either in exile, have been prosecuted, or have been driven out from their parties," said Ngendakumana, who is also head of the main coalition opposition Democratic Alliance for Change (ADC).

Burundi, a small nation in Africa&39;s Great Lakes region, emerged in 2006 from a brutal 13-year civil war, but its political climate remains fractious ahead of presidential polls in eight months&39; time.

Opposition leaders are falling foul of the law in quick-fire succession.

Respected veteran politician Frederic Bamvuginyumvira, a former Burundi vice president and  Frodebu&39;s deputy, was embroiled in a sex and bribery scandal which his supporters claim was a setup designed to block a challenge to the president.

He was bailed in March after being arrested "while having sex... in a house of ill repute" before allegedly trying to bribe his way to freedom, charges he denies.

Another leader, Alexis Sinduhije, head of the Movement for Solidarity and Development (MSD), is now in Europe after fleeing an arrest warrant in connection with a protest in March which turned violent. Dozens of opposition members were arrested after the march.

"The opposition is looking more and more like a heap of rubble left after a tsunami," said civil society leader Pacifique Nininahawe,

Meanwhile, Nkurunziza, who has been in power since 2005, is expected to run for a third term in office, despite opponents&39; claims that it is a violation of  Burundi&39;s constitution.

Burundi&39;s last elections in 2010 were boycotted by most opposition parties.

Critics say still more political heads are being pushed out of their own parties and replaced by new leaders more aligned with the president.

Such tactics were used in the case of ex-rebel chief Agathon Rwasa, who led the former guerrilla National Liberation Forces (FNL) but was ousted after it morphed into a political party.

And of those politicians who remain standing to challenge the ruling CNDD-FDD party, there remains a further handicap.

By decree of Interior Minister Edouard Nduwimana, they will be free to campaign only after being declared official candidates -- and then, only for a two-week period.

The CNDD-FDD "wants to go alone in these elections," claimed Frodebu&39;s Ngendakumana, who remains free from jail pending an appeal.

Ngendakumana&39;s slander sentence came after he accused the CNDD-FDD party of preparations similar to that which took place in neighbouring Rwanda before the genocide of 1994.

An estimated 800,000 people, mostly minority Tutsis, were killed in Rwanda in just 100 days -- in a tragedy formented by Hutu leaders and abetted by the Interahamwe militia.

Those bitter ethnic divisions are reflected in Burundi&39;s political parties despite an ethnic power-sharing arrangement set up in the peace deal that ended the civil war.

Rights groups including Amnesty International have said the Imbonerakure group has strong links to Burundi&39;s security service, accusing it of "perpetrating human rights abuses with impunity."

"Freedoms are exercised openly in Burundi whether for political parties, civil society or the media who criticise the government all day long," said Nzobonariba.

Political parties signed a code of conduct for free and peaceful elections in June, but still, the tension continues to mount.

The international community, which provides financial support crucial to the small nation, is growing increasingly worried.

"Everyone agrees on the fact that things are going very badly in terms of politics and freedoms," said a senior UN official who asked not to be named.

Donors are pondering whether to ratchet up pressure, or even impose sanctions, the UN official said.

The Netherlands, a major donor, have earmarked over a million dollars in funding for the electoral process  to prevent violence and encourage freedom of speech.

Government spokesman, Nzobonariba, complains that some opposition parties are even manipulating the international community.

President of the ruling CNDD-FDD, Pascal Nyabenda, has insisted that things have already "improved in terms of opposition and political violence meetings."