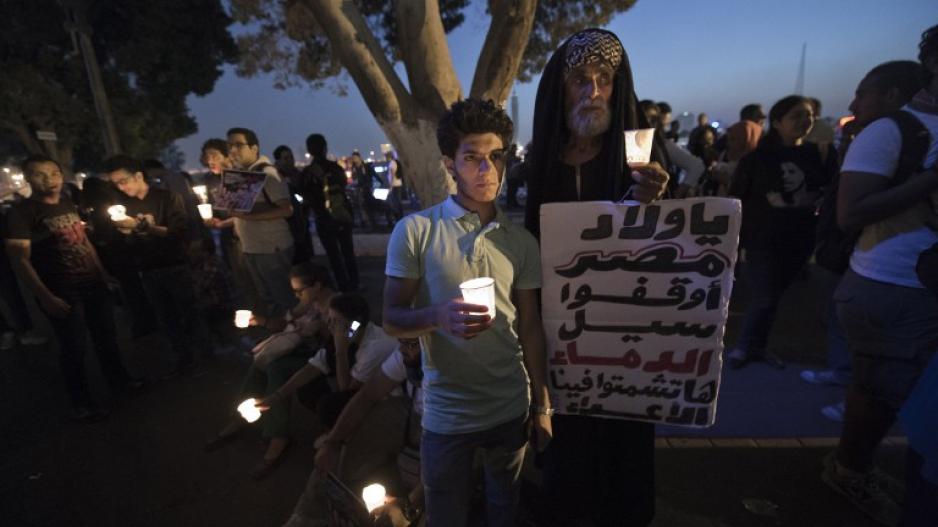 Egyptians hold candles in remembrance of those who were killed when security forces violently crushed a Coptic Christian demonstration in front of the state television (Maspero) building in Cairo.

In a report, Amnesty said more than 200 Christian-owned properties were attacked and 43 churches seriously damaged, adding that at least four people were killed.

"It is deeply disturbing that the Christian community across Egypt was singled out for revenge attacks over the events in Cairo by some supporters of the deposed president, Mohamed Morsi," said Hassiba Hadj Sahraoui, Amnesty&39;s Deputy Director for the Middle East and North Africa.

"In light of previous attacks, particularly since Morsi&39;s ousting on 3 July, a backlash against Coptic Christians should have been anticipated, yet security forces failed to prevent attacks or intervene to put an end to the violence."

Morsi was Egypt&39;s first democratically elected president, but his divisive single year in office ended abruptly when the army overthrew him with the support of millions of Egyptians.

Islamists accuse Coptic Christians of backing the military that toppled Morsi, who belongs to the Muslim Brotherhood.

This perception was fuelled by the appearance on television of Coptic Pope Tawadros II alongside army chief General Abdel Fattah al-Sisi when he announced Morsi&39;s dismissal.

Copts make up six to 10% of Egypt&39;s 85-million-strong population, and have long complained of discrimination and marginalisation, particularly under Morsi.

Amnesty said that in several cases men armed with guns, metal bars and knives ransacked churches and Christian properties, many chanting slogans such as "God is Great! and using derogatory terms like "Christian dogs".

It said historical and religious relics were desecrated, and graffiti scrawled on walls included slogans such as "Morsi is my president" and "They killed our brothers during prayer".

"Given the fact that these attacks were in retaliation for the crackdown on pro-Morsi sit-ins, the leadership of the Muslim Brotherhood said too little too late, and laid the blame on &39;thugs&39; distancing their supporters from the attacks," Hadj Sahraoui said.

Amnesty also said the body of a 60-year-old Coptic Christian shot dead at his home in the central town of Delga was dragged through the streets behind a tractor, and that after he had been buried his grave was dug up twice.

Attacks by Islamists on three churches and a monastery in Delga have shattered its Christian community, a reporter who visited the town said.

Copts who fled the attacks are slowly returning to their homes there, but many find them ransacked and gutted.

Amnesty called for an impartial and independent inquiry.

"Any investigation must also examine the role of the security forces. Some incidents lasted for hours and recurred in subsequent days," said Hadj Sahraoui.

"Why were the security forces unable to prevent and put an end to such attacks?"

Egypt&39;s new army-installed government has launched a widespread crackdown on Islamists, jailing more than 2,000 since the pro-Morsi camps were stormed in August.

Morsi himself is in custody, as are most of the Brotherhood&39;s leaders including its supreme guide Mohammed Badie.