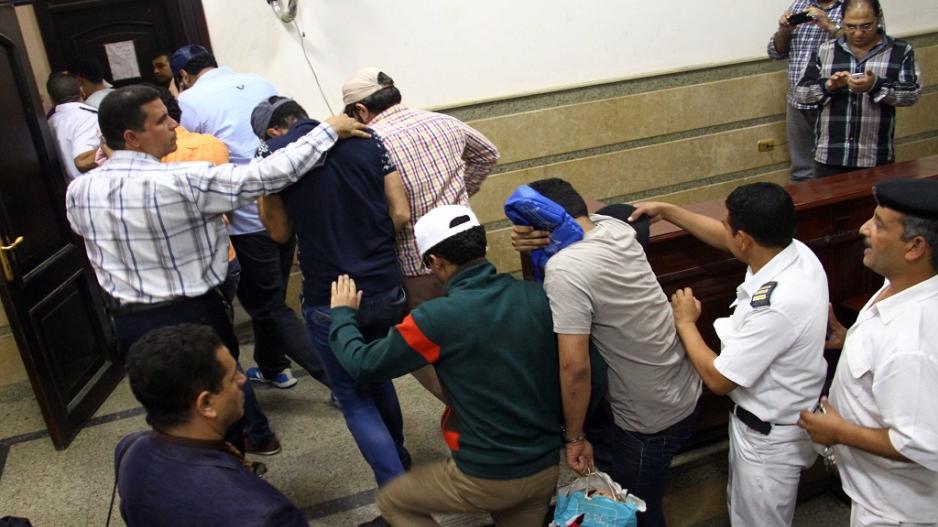 Egyptian men on trial for doing a video prosecutors claimed was of a gay wedding enter the courtroom in Cairo on November 1, 2014.

CAIRO – Seventeen men suspected of being homosexuals went on trial in Egypt on Sunday for alleged "debauchery" and "incitement to debauchery", judicial sources said.

There was no further information about the hearing, which was closed to journalists and defence lawyers were not immediately available for comment.

Homosexuality is not expressly outlawed in Egypt, but gays have previously been charged with debauchery in the deeply conservative Muslim society.

Security forces arrested at least six people after they held a rainbow flag representing lesbians, gays, bisexual and transgender (LGBT) people at a concert by Lebanese band Mashrou' Leila in Cairo on 22 September.

"The fact that Egypt's public prosecutor is prioritising hunting down people based on their perceived sexual orientation is utterly deplorable," Amnesty International said in a statement.

The Egyptian authorities' use of smartphone dating apps such as Grindr to find LGBT people and raid places they frequent has sparked panic in the community.

The Supreme Council for Media Regulation on Saturday banned "any promotion of homosexuality" in the media, describing it as a "shameful sickness".

"We have identified at least 22 people who have been arrested since the (Mashrou' Leila) concert," said Dalia Abdel Hamid of the Egyptian Initiative for Personal Rights (EIPR).

Human Rights Watch has appealed to the Egyptian government to stop its repression of homosexuals.

In April 2016, 11 men suspected of being gay were sentenced to 12 years in prison for "inciting debauchery", triggering widespread international condemnation.