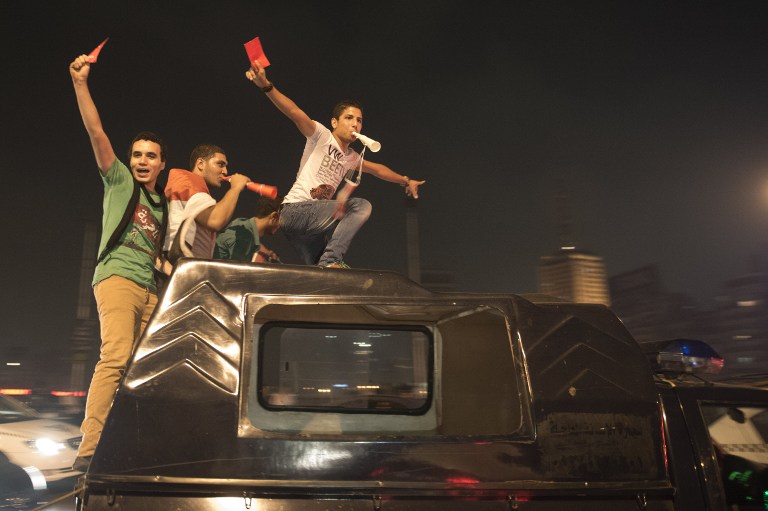 Egyptian youths on police vehicle celebrate in Cairo on July 3, 2013 after a broadcast confirming that the army will temporarily be taking over from the country's first democratically elected president Mohammed Morsi.

CAIRO - Egypt’s military has announced a road map for political transition in the country.

This follows the ousting of President Mohamed Morsi last night.

The country&39;s constitution has been temporary suspended.

He&39;s expected to pave the way for fresh elections and a new constitution.

Army authorities had given Morsi until 17:00 CAT yesterday, to step down.

"This roadmap includes, suspending the constitution, holding early presidential and parliamentary elections, the formation of a national reconciliation committee that would include youth movements.

"The head of the Supreme Constitutional Court has the authority to announce constitutional statements during the transitional period, the roadmap also includes setting up a panel to review the constitution amendments," he said.

Morsi has not been seen since yesterday’s announcement, but various reports suggest the 61-year-old is being held at a military facility.

"He is being held preventively for final preparations," the official said, suggesting Morsi might face formal charges over accusations made by his opponents.

Morsi was detained along with senior aides after issuing a defiant call for supporters to protect his elected "legitimacy", in a recorded speech hours after the military announced he had been ousted Wednesday.

"We had to confront it at some point, this threatening rhetoric," the military official said.

"He succeeded in creating enmity between Egyptians," the official said.

At least 50 people were killed in clashes in the days leading to massive protests on June 30 calling for his departure.

That prompted the army to issue the president a 48-hour ultimatum to find an agreement with the protesters.

Morsi has been summoned for questioning by a court over his escape, along with other inmates, from prison during the revolt that overthrew his predecessor Hosni Mubarak in 2011.

The military official suggested he may now be charged by prosecutors in the case.  He would not specify where Morsi is being held.

Morsi&39;s top aides have switched off their phones. Other presidential aides who were separated from Morsi earlier in the day say they have lost communication with their leader.

Morsi had earlier been at his office in the Republican Guard&39;s headquarters, before he was moved.

Hours after the military announced it had cancelled the constitution and would appoint the head of Egypt&39;s top court as interim president, Morsi had issued a defiant call to arms in a prerecorded speech aired on Al-Jazeera television.