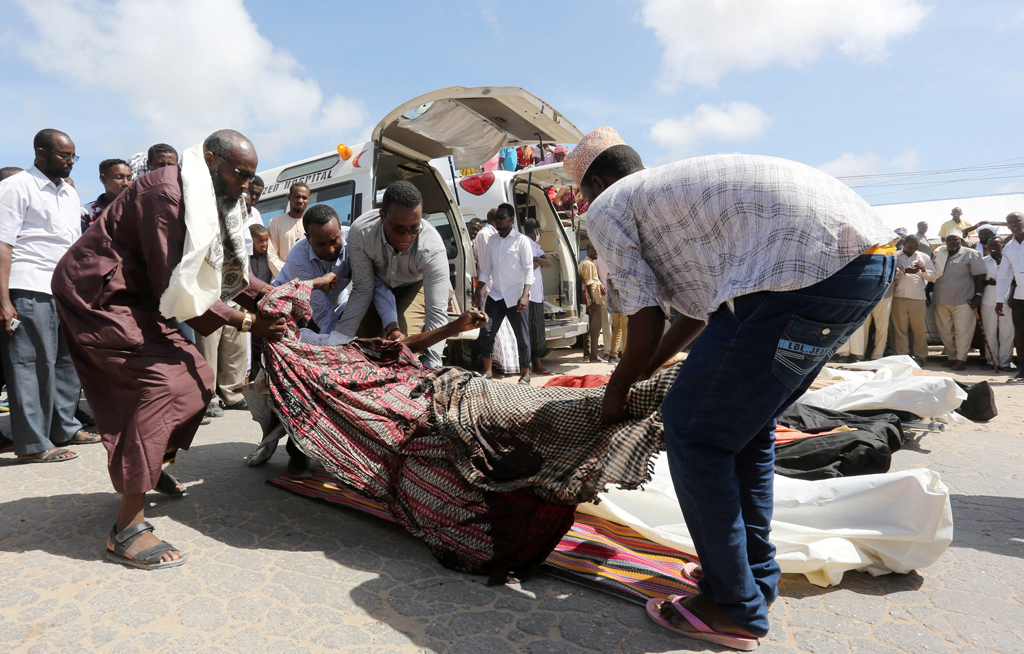 Relatives carry the body of a farmer killed in an attack by Somali forces and supported by US troops in lower Shebelle Region.

MOGADISHU - Somali officials said Friday they had killed eight jihadist fighters during an overnight operation, denying claims from local elders that they had shot civilians dead, two of them children.

Somali community leaders accused the troops, accompanied by US military advisors, of having killing the nine civilians in the overnight operations.

An initial government statement said its troops had come under fire from jihadists while on patrol, insisting that no civilians had been killed.

A later statement acknowledged that there had been civilian casualties, in what the government seemed to suggest was a separate incident. They did not say who was responsible.

Somali troops and their "international partners" had come under attack early Friday at a farm near Bariire, in the Lower Shabelle region, the first government statement said.

"The individuals shooting at the SNA (Somali National Army) soldiers were al-Shabaab fighters; they were not farmers," a General Sheegow, identified as the 20th Brigade Commander, said in the statement.

"Our security forces go to great lengths to prevent civilian casualties during all of our activities," the information ministry statement added.

But local elders called a news conference in the capital Mogadishu and displayed nine bodies, two of them children, saying they were civilians killed in cold blood by Somali troops.

The Somali soldiers had been accompanied by US military advisors, they added.

"The Americans forces and members from the Somali troops executed nine civilians by gun and as you can see all of them have gunshots," said one of the elders, Abdul Elmi.

"They were shot indiscriminately," he added.

Local security official Ibrahim Osman confirmed that nine civilians had been killed, but could not say in what circumstances that had happened.

"This was horrible attack," he told AFP by phone.

"They have killed nine civilians, two of them children, at a farm outside Bariire. They have been killed late night but I'm not sure how this happened", he added.

After the local elders produced the bodies, the authorities elaborated on its earlier statement, saying "...it appears that there were different security operations that took place in the area."

But it repeated its insistence that no civilians had been killed in the operation against the Shabaab fighters.

Acknowledging the reports of civilian casualties, it said it was investigating. "We urge Somali people to cooperate fully with the Government on this matter," it added.

The Shabaab, a militant islamist group affiliated with Al-Qaeda, have sworn to overthrow Somalia's fragile government, which is kept in place with international support.

AMISOM, a 22,000-strong force led by the African Union is also backing the administration in Mogadishu.

The Shabaab force was pushed out of the capital in August 2011 and lost most of its other bastions in Somalia.

But they still control vast swathes of countryside, from where they launch guerilla operations and suicide attacks, against the capital and against local and international military bases.