Elephant poaching in Africa falls but ivory seizures up: study 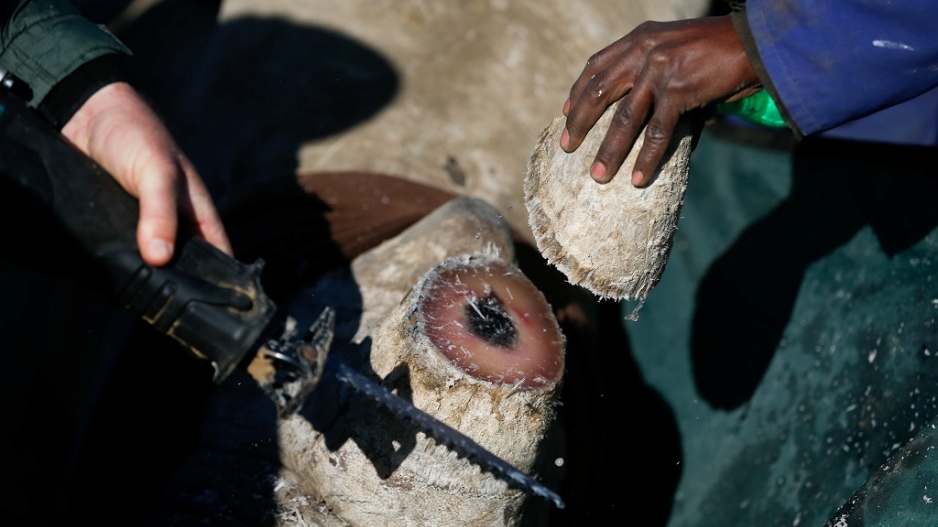 A tranquillised rhino is dehorned in an effort to deter the poaching of one of the world's endangered species, at a farm outside Klerksdorp, in the north west province, South Africa, August 14, 2017. Picture taken August 14, 2017.

GENEVA - Elephant poaching in Africa declined for a fifth straight year in 2016 but seizures of illegal ivory hit records highs, the CITES monitor said Tuesday, calling it a "conflicting phenomena".

In its latest report, the Convention on International Trade in Endangered Species also noted that despite the overall fall in poaching, Africa&39;s elephant population has continued to drop "due to continued illegal killing, land transformation and rapid human expansion."

But 2016 saw a full 40 tonnes of illegal ivory seized, the most since 1989, as well as the highest-ever number of "large-scale ivory seizures", the group said.

"The overall weight of seized ivory in illegal trade is now nearly three times greater than what was observed in 2007", CITES added in a statement.

That could be a result of increased vigilance among border guards and "scaled up enforcement", said CITES secretary general John Scanlon.

But Scanlon also speculated that the prospect of tougher enforcement along with the widening trend of countries moving to ban ivory may have had a ripple effect across the black market.

"International syndicates behind this poaching and smuggling may be involved in a panic sell-off as they realise that speculating on extinction was a bad bet, with the an ever-increasing risk of getting caught," Scanlon was quoted as saying.

Multiple studies from civil society groups have reported a 50 percent drop in ivory prices in recent years, according to CITES.

The outlook for elephant populations across Africa is mixed, according to the report.

The International Union for Conservation of Nature (IUCN) has previously found that Africa&39;s elephant numbers fell by 111,000 between 2006 and 2015.

But according to CITES, the population in southern Africa and much of East Africa is now either stable or increasing.

Continent-wide, Botswana has the most number of elephants, while populations in Kenya, Namibia, Rwanda, South Africa and Uganda are holding steady or climbing.

Illegal elephant killings, however, remain high in Central Africa, home to chronically restive countries like the Democratic Republic of the Congo and the Central African Republic, where weak conservation efforts have failed to stem poaching.

CITES monitors the international anti-trafficking agreement among countries that came into force in 1975 and has now been joined by 183 state parties.