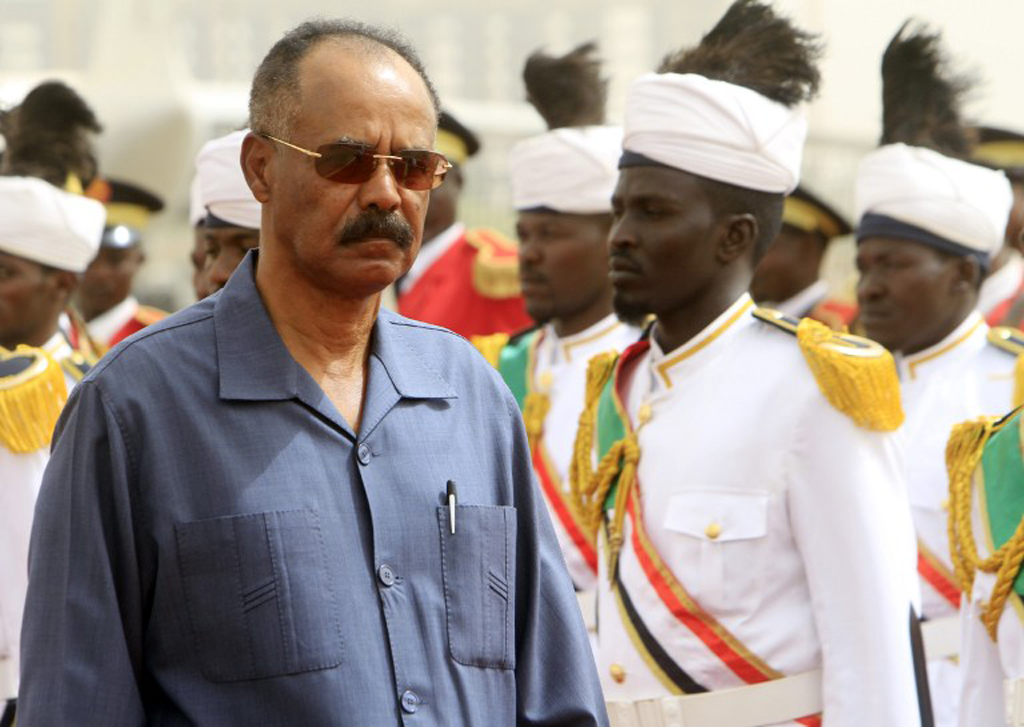 Eritrean President Isaias Afwerki (L) reviews the honor guard during his welcome ceremony in the Sudanese capital, Khartoum, on June 11, 2015.

NAIROBI - Heroic freedom fighter or iron-fisted dictator, Eritrean President Isaias Afwerki&39;s divisive rule over the Horn of Africa nation is strong as ever, over two decades since taking power.

But his rule has been challenged by the monthly flood of refugees from Eritrea, with many of the thousands heading towards Europe, the third-largest number of those risking the dangerous sea crossing.

Authoritarian and austere, 69-year old Isaias led one of Africa&39;s most remarkable rebel armies in a bitter 30-year struggle against a far larger Ethiopian army, backed first by the United States, then the Soviet Union.

At independence in 1993 he became the country&39;s first -- and so far only -- president, but his increasingly iron-fisted and paranoid rule is driving thousands to flee every month, contributing to the world refugee crisis.

Eritrea was once held up as a beacon of hope for Africa by Western governments, and Isaias was hailed as a "renaissance leader" by then US President Bill Clinton.

But attitudes changed sharply as Marxist-inspired Isaias tightened control of the one-party state run by his People&39;s Front for Democracy and Justice (PFDJ) and as he began backing regional rebels, including accusations of supporting the Somalia-based Al-Qaeda affiliate, the Shebab.

Born in 1946 in Asmara into an Orthodox Christian family, Isaias moved to the Ethiopian capital Addis Ababa to study engineering but, aged 20, left to join a fledgling separatist rebel movement fighting for Eritrean independence.

Tall, handsome and with a fearsome temper, Isaias rose through the ranks to command a well-organised movement whose guerrillas dug a warren of bunkers to hold out against Ethiopian fighter jets.

The rebels finally liberated Asmara in 1991, followed by an overwhelming vote for independence in a referendum two years later.

But Eritrea&39;s dream of freedom turned sour. Between 1998-2000 Eritrea fought a renewed border war with Ethiopia that left at least 80,000 dead.

An international court awarded the flashpoint frontier town of Badme to Eritrea, but the Ethiopians have refused to withdraw, fuelling long-running tensions that drove Isaias to ship guns to regional rebels to needle Ethiopia.

Partly because of criticism of his handling of the war, Isaias launched a brutal purge in September 2001, arresting 11 top party figures -- close colleagues from the independence struggle -- and forcing a wave of others to flee.

He brooks no criticism, shrugging off international condemnation, including for throwing out a United Nations peacekeeping mission and expelling international aid agencies in a draconian policy of self-reliance.

Migrants from Eritrea and Ethiopia wait for food at Milan train station on June 17, 2015 after the suspension of the free circulation across the France border due to Europe&39;s migrant crisis.

Isaias has closed all independent media and jailed critical journalists. Eritrea dropped below North Korea as the world&39;s worst nation for press freedom, according to rights group Reporters Without Borders.

Religious minorities including evangelical Christian sects are jailed in grim conditions -- often locked in shipping container prisons in baking heat -- because Isaias believes they are a foreign plot to foment divisions in a nation officially split equally between Islam and Christianity.

A keen admirer of Mao Zedong after training in China during the chaos of the Cultural Revolution, he still plays "a mean game of ping pong", according to US diplomatic cables, although his once close ties to Beijing have waned in recent years.

Isaias, who like most Eritreans is known by his first name, shunned the cult of personality beloved by other African strongmen. His portrait is not on the country&39;s banknotes and is rarely seen outside official buildings.

Indeed, Isaias once would take regular evening strolls down the streets of the mountain capital Asmara with its elegant Italian-era colonial architecture, popping into smoky bars for a drink, apparently keen to cultivate a "man of the people" image.

However, in recent years the "isolated and mercurial... unhinged dictator" -- as leaked US diplomatic cables describe him -- has became increasingly paranoid, fearing assassination attempts which he said were backed by the US spy agency, the CIA.

His popularity slumped in the tightly restricted country, where the young are conscripted into mass national service that can last for decades, and where military police prowl the streets to round up those skipping the army service.

Together, open-ended conscription and state repression have driven thousands to flee despite a shoot-to-kill policy by border patrols, with families of those left behind risking being punished by crippling fines or imprisonment.

As the economy has stagnated, rumours have grown of Isaias&39;s heavy drinking, furious temper and shouting fits aimed at cowed officials.

Although nominally under civilian rule, Eritrea under Isaias has been carved up into zones of control by army generals, who run flourishing networks of corrupt businesses and cream off lucrative profits.

But with opposition figures jailed and government media warning of a constant threat of Ethiopian attack, many feel there seems little alternative to the unelected president, still viewed by some as a hero of the independence war.