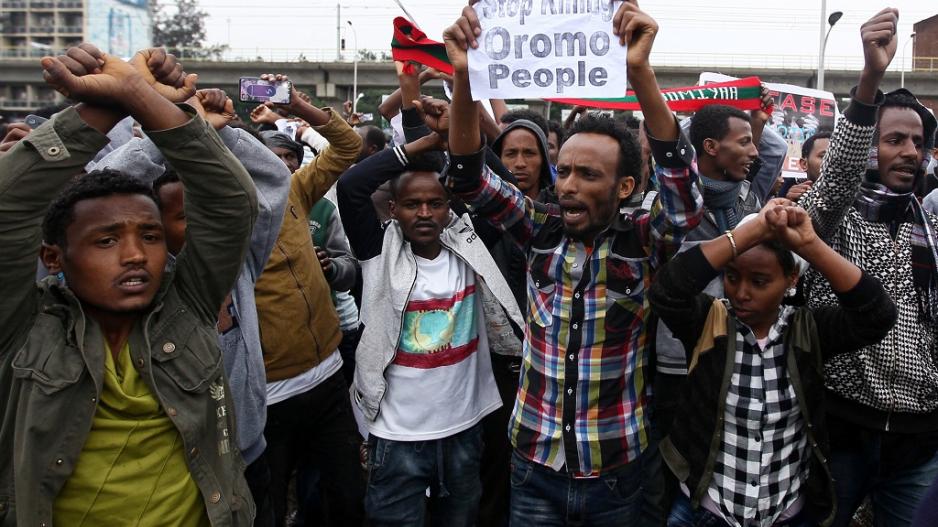 Protesters chant slogans during a demonstration over what they say is unfair distribution of wealth in the country at Meskel Square in Ethiopia's capital Addis Ababa, August 6, 2016.

ADDIS ABABA – Ethiopian police have re-arrested a blogger and human rights activist who criticised the government, especially its handling of the ongoing protests in the Oromia and Amhara regions.

Befeqadu Hailu, who is also a member of the Zone9 blogging collective and one of seven bloggers – one in absentia – and three independent journalists arrested in April last year. Three months after their arrest all 10 were charged in terms of Ethiopia’s infamous Anti-Terrorism Proclamation.

Two police officers calling themselves security members of the command post established to implement Ethiopia’s current six-month state of emergency took Befeqadu from his house. He is now detained at a police station known as 06 in the capital, Addis Ababa.

A month ago when the government declared the state of emergency he wrote on his blog, The Q Perspective, that he anticipated his arrest given the general description of the emergency. He feared for his life, for other activists, and journalists, as the declaration allows security forces to use their authority to detain people without a court order.

After an 18-month trail, largely marked by several inconsistencies and the prosecutor’s inability to provide concrete evidence, a federal court cleared all of them.

However, upon appeal by the prosecutor, Befeqadu and four of his co-defendants – Natnail Feleke, Atnaf Birhane, Abel Wabella, and Soliyana Shimelis, the latter in absentia – re-appeared in the Federal Supreme Court. The hearing was adjourned for the fifth time until 15 November.

A number of journalists are serving jail terms for writing critical pieces about the government.

How can one be more peaceful, innocent, concerned & responsible than #BefeQaduHailu? He is a concerned citizen! Nothing more, Nothing less!

Befeqadu also faced a criminal charge for allegedly “inciting violence”, but was released on bail. It is not clear if his re-arrest has to do with both cases. However, people close to him told African News Agency (ANA) he was detained because of the interview he gave for Voice of America’s (VOA) Amharic service. Befeqadu gives various interviews and analyses on Ethiopia’s political situation of the country.

He once told ANA that the reason he gives interviews to media organisations and blogs is because that is his only way  to contribute to changing the country’s political environment. “As our blog states, I blog because I care,” he said.

Since Ethiopia declared the six-month state of emergency, detentions of opposition party members, journalists, and rights activists has increased significantly. Thousands of ordinary Ethiopians are also currently held in dire circumstances inside several detention camps throughout the country.

Thousands of people have taken to the streets in recent months to protest against what they see as government abuses and the over-representation of people from the northern Tigray ethnic group in government.

Ethiopia is the third-worst jailer of journalists in Africa according to the Committee to Protect Journalists’ (CPJ) 2015 prison census. Several bloggers are among those held on vague terrorism-related charges, including prominent blogger Eskinder Nega, who is in his fifth year of an 18-year sentence following his arrest in September 2011 after he wrote an article highlighting the use of anti-terrorism legislation to harass opposition activists.