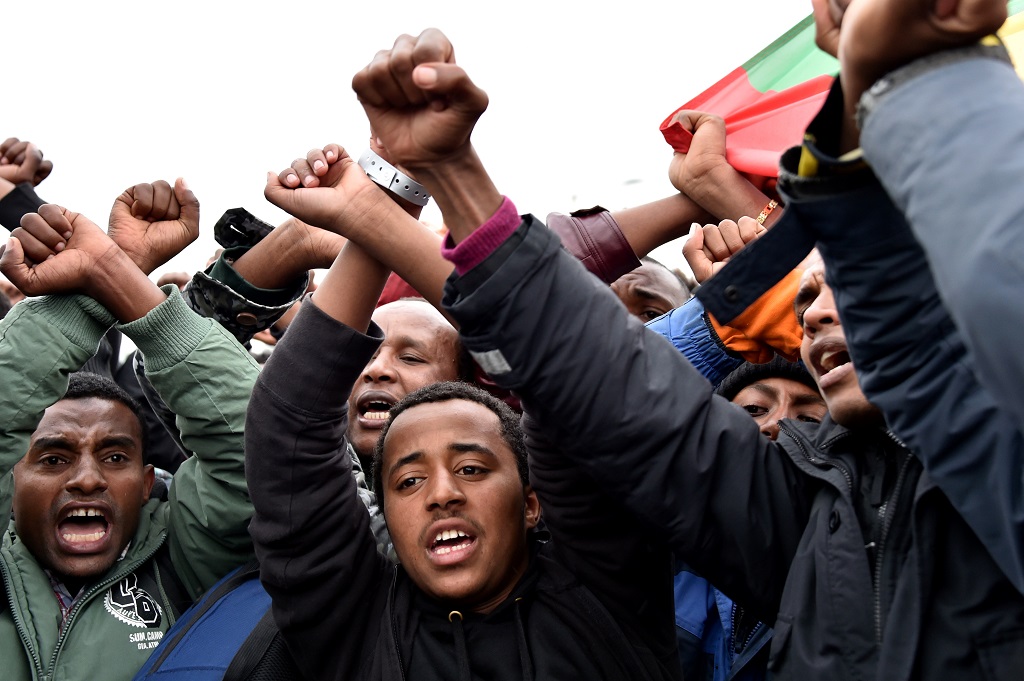 Migrants from Ethiopia cross their arms to symbolise the protest of the Ethiopian Oromo community against the government as they celebrate leaving the Calais "Jungle" camp, in Calais, northern France, on 24 October 2016.

A cause celebre for opponents of Ethiopia&39;s government during his time behind bars, Merera is the only prominent opposition politician to be freed since Prime Minister Hailemariam Desalegn announced earlier this month that his administration would release an unspecified number of the many dissidents jailed in the country.

The announcement came amid continuing anti-government unrest in Ethiopia despite authorities ending a 10-month state of emergency last year and ongoing dialogue between the government and some opposition groups.

In an interview with AFP on Tuesday, Merera said the dialogue holds little promise because the opposition parties involved are unpopular, while the prime minister&39;s goal for the prisoner amnesty to "improve the national consensus and widen the democratic platform" will not be met if more prisoners are not released.

"I think [for] the ruling party, it is time to rethink, and stop these piecemeal things and lead this country to a real national dialogue and a national consensus. That&39;s the only way out," Merera, 61, who chairs the opposition Oromo Federalist Congress, said at his home in the town of Burayu west of the capital Addis Ababa.

Merera was detained in December 2016 shortly after the state of emergency declaration, which followed months of anti-government protests. Hundreds died and tens of thousands were arrested.

Those protests started the previous year when the country&39;s largest ethnic group the Oromos denounced a plan to expand the capital Addis Ababa into their federal region Oromia.

The unrest later spread to another region populated by Ethiopia&39;s second-largest ethnic group, the Amharas.

The demonstrations represented one of the biggest challenges ever to the unchecked power of the Ethiopian People&39;s Revolutionary Democratic Front (EPRDF), which has led the country since 1991 and currently controls with its allies every single seat in parliament.

Outside of our control

Protests have continued since the August 2017 expiry of the emergency decree, and the prisoner amnesty along with the government&39;s assurance that more detainees will soon be released is widely seen as an attempt to temper the discontent.

"Millions of youth are outside of our control. If we don&39;t present something real to them, again they can go out of control," said Merera, who is Oromo.

While he was charged with an array of offences, Merera believes his arrest was an attempt to sap the morale of the protesters and sow disunity among the country&39;s opposition parties.

He said he considered retiring from politics after spending more than a year incarcerated during his trial, but decided against it after the reception he received from supporters upon his release.

"A country of 100 million, is too big, too big for one group. That is clear to everybody, I think including to them, those who lead us," Merera said.

"Really, controlling state power should not be the end of the world. They should see life after that."