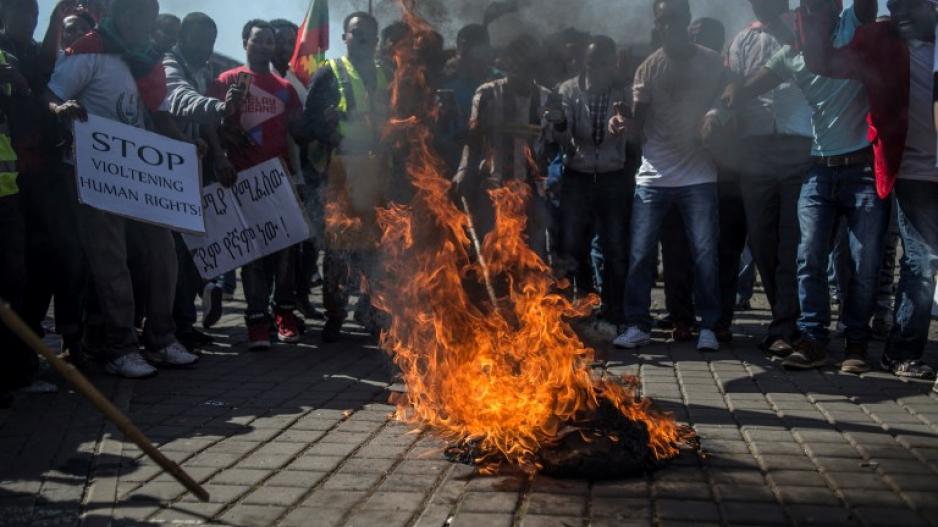 File: Members of the Oromo, Ogaden and Amhara community in South Africa burn placards as they demonstrate against the ongoing crackdown in the restive Oromo and Amhara region of Ethiopia on August 18, 2016 in Johannesburg.

ADDIS ABABA - Clashes that erupted in Ethiopia this month between two of the country's largest ethnic groups have killed hundreds of people and displaced thousands, the government said Monday.

The killing of two local administrators coupled with long-running land disputes led to an outbreak of fighting between the Oromo and Somali peoples in the south, government spokesman Negeri Lencho said.

"We can say hundreds of the Oromo ethnicity were killed... and there were also deaths from the Somali side, we don't know exactly how many," Negeri told a press conference.

The fighting that started along the border between the regional states belonging to the two ethnic groups has since been quelled, Negeri said.

Ethiopia is divided into ethnically-based federal regions and the Oromo and Somali people have for years argued over who controls arable land along their shared border.

A 2004 referendum decided the issue, but clashes have persisted with officials from both sides trading accusations that local armed forces are involved.

In April, the presidents of the two regions signed an agreement to settle the unrest.

Negeri said two officials from the Oromia region were arrested by Somali regional forces and killed on September 11, provoking violent protests by the Oromos.

A national task force has been set up to address the needs of the displaced - which Oromo president Lemma Megersa last week put at 50,000 people - and mediation efforts were underway with community elders.