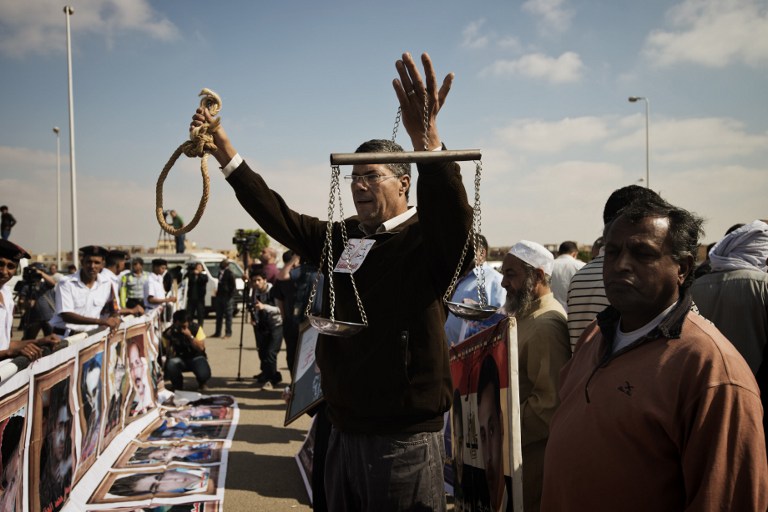 A protester against former Egyptian president Hosni Mubarak holds a scale and noose as he demonstrates outside the Egyptian Police Academy in Cairo during a hearing in the trial of the ousted strongman on April 13, 2013.

GABORONE – The European Union (EU) has called on the government of Botswana to reinstate a moratorium on executions to ensure that the country progresses towards the universal abolition of the death penalty.

The EU issued the statement after the execution of Patrick Gabaankanye following his March 2014 conviction for the aggravated murder of a 75-year old blind man during a robbery in 2010.

The victim was axed five times during a house robbery in which Gabaankanye stole cups, cutlery, a pocket radio and a Nokia cellphone.

A statement from the Botswana Prison Service (BPS) said Gabaankanye, who had several other previous convictions which included murder, robbery, theft and rape dating back to 1983, was executed early on Thursday morning at the maximum security prison in Gaborone.

His appeal against the death sentence was dismissed by the Court of Appeal on July 30, 2015. However, the EU has called on Botswana to reconsider the death penalty.

“Following the recent execution of Patrick Gabaankanye, in Gaborone, Botswana, the European Union recalls its opposition to the use of capital punishment which can never be justified. The European Union believes that the death penalty is a cruel and inhumane punishment and has consistently called for its universal abolition.

“Experience worldwide has demonstrated that the death penalty fails to act as a deterrent to crime. We call on the Botswana authorities to reinstate a moratorium on executions as a first step towards the universal abolition of death penalty,” the EU said.

Gabaakanye became the fourth inmate to be executed in Botswana in the last 20 years after the 1999 execution of South African immigrant Mariette Bosch, for murder. It was followed by the July 2003 hanging of South African national Lehlohonolo Bernard Kobedi for the murder of a policeman during a robbery in 1993 and the 2008 execution of a Modise Mokwadi Fly, a Motswana citizen, reggae musician and opposition politician, for killing his own child in 2006.