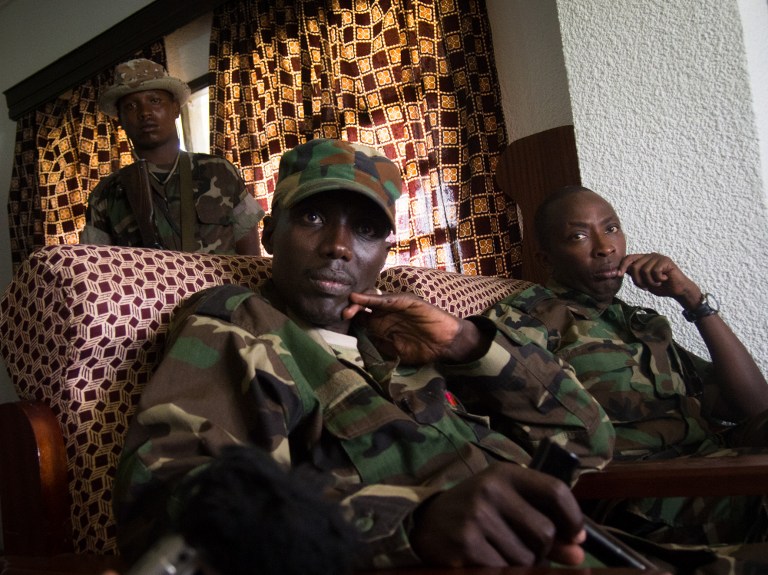 The head of the M23 rebel military forces, Brigadier-General Sultani Makenga (front L) from the Democratic Republic of the Congo, sits in a room on March 2, 2013 surrounded by his guards in Bunagana.

ABIDJAN - Congo has stepped up border patrols after the former military chief of a once powerful rebel group vanished from a camp for demobilised fighters in neighbouring Uganda, and unidentified soldiers were spotted in the area.

Julien Paluku, governor of the North Kivu province in Congo's volatile east, said Ugandan authorities no longer knew the whereabouts of Sultani Makenga, who was the military chief of the M23 rebellion in the Democratic Republic of Congo.

"We were in contact with the Ugandan intelligence services who confirmed that, since Friday, ex-Colonel Makenga may have fled and the Ugandan services have not been able to locate him," Paluku told Reuters on Saturday.

An official with M23's political wing declined to comment and referred questions about Makenga to the Ugandan authorities. A Ugandan army spokesman said he did not know if Makenga had disappeared but would seek to confirm his whereabouts.

Until its defeat in 2013, M23 was the strongest of dozens of armed groups that have continued to control large swaths of mineral-rich eastern Congo despite the end of 1998-2003 war.

The area was also the epicentre of a 1996-97 conflict and it remains a tinder box of ethnic and political divisions even today. Some researchers say millions died as a result of the wars, though others dispute that estimate as exaggerated.

Paluku said there was no confirmation Makenga had returned to Congo but said there had been reports of unidentified troops in North Kivu's Sarambwe Nature Reserve, along the border with Uganda, an area that was once an M23 stronghold.

"There's a maximum alert. Our troops are carrying out combat patrols so that, if it turns out it's true, they will proceed to neutralise (Makenga) along with any allies who might be accompanying him on this adventure," the governor said.

At its peak, M23 seized North Kivu's capital Goma but following its defeat by UN and Congolese troops, many of its fighters fled into Uganda and Rwanda. They have since lived in military-run camps awaiting amnesties promised under a peace deal.

Uganda said in 2014 that it was hosting 1,430 former M23 fighters. However, many have since left the camps and there have been persistent rumours that the rebels were seeking to regroup.

UN investigators said the group, accused of war crimes by rights campaigners, was supported by Rwanda - a charge Kigali has repeatedly denied.

Security Council just pressed President Kabila to release political prisoners in #DRC. He said, please give me a list of prisoners. pic.twitter.com/5Kg6qx699z

UNSC asked #DRC Pres. Kabila to confirm he would not run in election. He said Constitution clear on no 3rd mandate but could be amended.