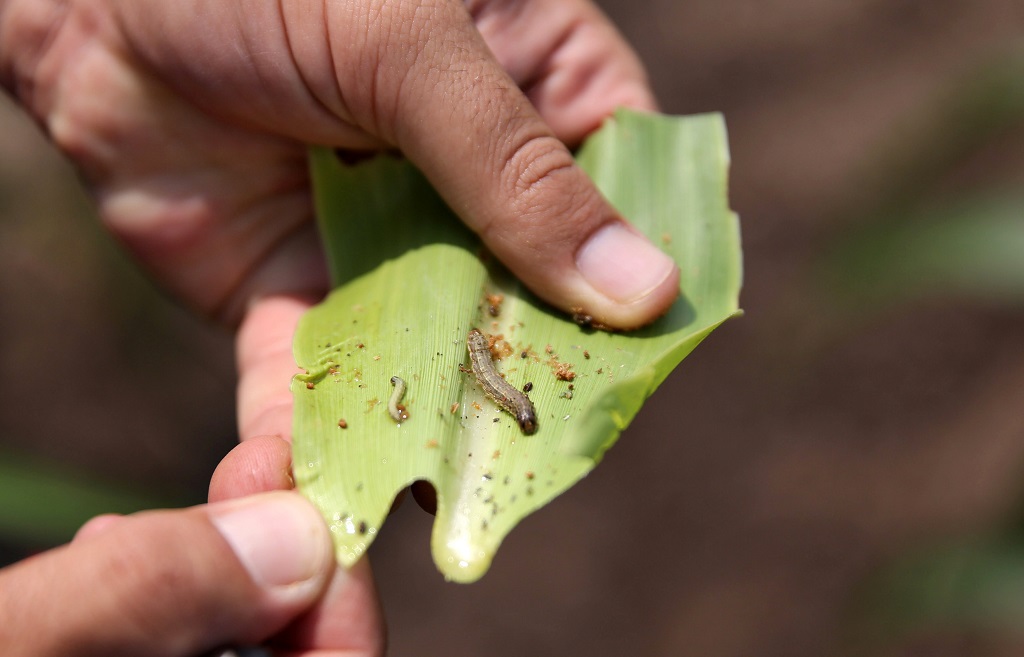 A crop-eating armyworm is seen on a sorghum plant at a farm in Settlers, Limpopo on February 8,2017. The caterpillar is spreading through crops in southern Africa.

HARARE - International experts are holding emergency talks in Harare on Tuesday to tackle an outbreak of crop-eating "armyworm" caterpillars advancing across several countries.

Experts from 13 countries will spend three days forming a battle plan to defeat the pests.

The armyworm has already caused damage to staple crops in Zambia, Zimbabwe, South Africa and Ghana, with reports also suggesting Malawi, Mozambique and Namibia are affected.

Experts say it appears to be the first time that the "Fall armyworm" species from the Americas has caused widespread damage in Africa.

"Farmers do not know really how to treat it," said David Phiri, the UN Food and Agriculture Organisation's (FAO) coordinator for Southern Africa.

READ: Armyworms are wreaking havoc in southern Africa. Why it's a big deal

"Nobody seems to know how it reached Africa," he said, adding that the caterpillar first appeared on the continent in places like Nigeria and Togo last year.

One theory is that the caterpillars arrived in Africa on commercial flights from South America or in plants imported from the region.

The caterpillars eat maize, wheat, millet and rice -- key food sources in southern and eastern Africa, where many areas are already struggling with shortages after the most severe drought in recent years.

The armyworm was "spreading rapidly" in Africa and could threaten farming worldwide, the Centre for Agriculture and Bioscience International (CABI) warned last week.

It said maize was particularly vulnerable to the larvae, which attack the crop's growing points and burrow into the cobs.

Unlike the native African armyworm, the Fall armyworm does not "march" along the ground in huge numbers seeking more food, the FAO said.

"This sequence of outbreaks began in mid-December 2016 in Zambia," Kenneth Wilson, professor at Lancaster University in Britain, wrote in a briefing paper on Monday. "It is now as far south as South Africa. Because armyworms feed on many of the staple food crops they have the potential to create food shortages in the region."

Chemical pesticides can be effective, but Fall armyworms have developed resistance in their native Americas.

"You use different methods. One of them is pesticides, another is to use biological control. Another is to use natural control, like digging trenches around the farm (or) natural predators, like birds, to eat those worms," said Phiri.

"If it is a small amount of the worms, it's easy to control, using pesticides. Otherwise, it's very difficult to control it, so they will have to use different methods -- including sometimes burning the crops."

Zimbabwe's deputy agriculture minister, Davis Marapira, confirmed that the pest had been detected in all 10 of the country's provinces.

"The government is helping farmers with chemicals and spraying equipment," Marapira said.

The FAO, which is hosting the Harare meeting, said armyworm outbreaks combined with current locust problems "could be catastrophic" as southern Africa had yet to recover from droughts caused by the El Nino climate phenomenon.

In December, Zambia deployed its national air force to transport pesticides across the country so that fields could be sprayed.