Famine creeps in on Africa while the world's media looks elsewhere 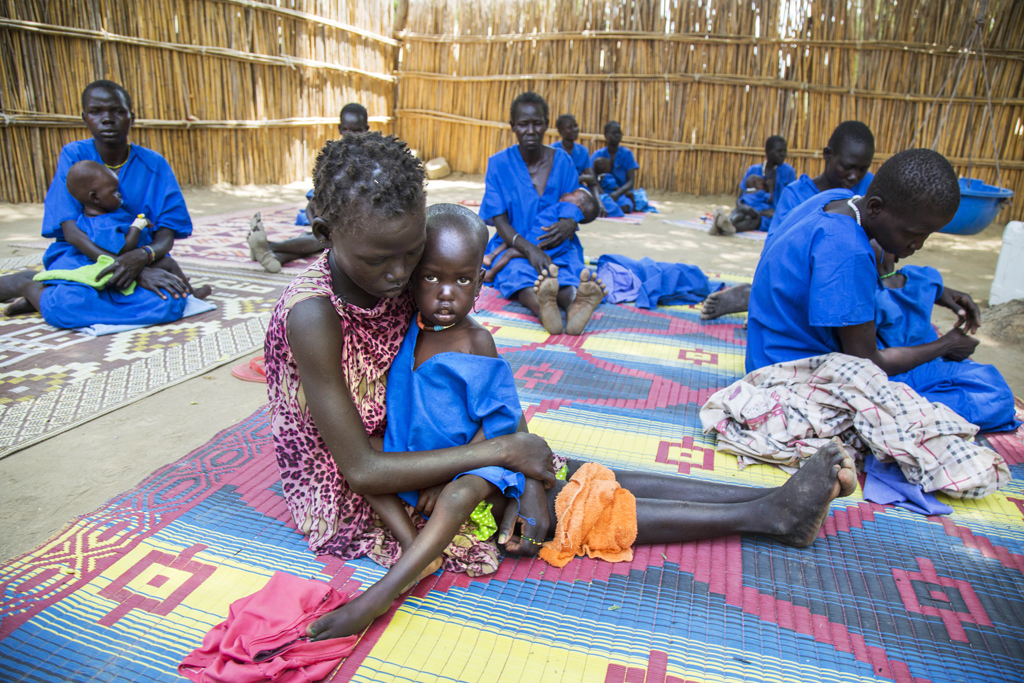 Two women hold their acute malnourished children on March 4, 2017, in a stabilisation centre in Ganyiel, Panyijiar county, in South Sudan.

Major political events in the US and Europe have preoccupied western media over the past year. Chief among these has been Donald Trump’s rise to US president and his continuing efforts to establish a credible domestic and foreign policy agenda.

Before that, the inability of the European Union to agree on a plan to host an influx of refugees gained the media’s attention along with the United Kingdom’s referendum on Europe. Now a succession of national elections across Europe – in France, Germany and the UK among others – looks set to dominate front page news.

The western media’s focus on momentous events at home has come at the expense of reporting on events unfolding in the global South. Among the events which have been eclipsed by the media’s preoccupation is the famine that’s unfolding in Africa.

Today the causes of famine are largely man-made even though below average rain fall has exacerbated local food production in the Horn of Africa over the past 18 to 24 months. However, in Sudan, Niger, the Central African Republic and Nigeria military conflict over the past three to four years has disrupted food production, displaced millions and created conditions which prevent the delivery of humanitarian assistance (assuming it was available).

The situation today is not unlike events that unfolded in Ethiopia in the early 1980s. Western governments then failed to monitor and intervene in time to prevent or mitigate the famine. It took a global media event – in the form of Band-Aid and a pop song [Do they know it’s Christmas] – to focus attention on the failure of western governments to respond to the tragedy that was unfolding. Alas humanitarian assistance, when it arrived, was too little too late.

The factors responsible for famine are complex. But, following the work of Amartya Sen, a Nobel Prize-winning economist, they are well known and should be the focus of western development policy and humanitarian assistance. They include poor governance, inadequate planning, limited investment in development, ongoing violence and large-scale population displacement. Unfortunately, such factors don’t appear on the agendas of western governments.

At the same time development assistance to Africa has declined since 1990. The continent receives approximately 33% of total Overseas Development Assistance, down from 45% in 1990. And while humanitarian aid has stabilised at 7% to 8 %, funding for economic projects has increased from 17% to 21%.

Even though over the long-term the assistance should, in theory, be declining as the pace of development picks up, the need for humanitarian assistance needs to be constantly assessed so that it can be delivered in time to save lives.

Why has western development policy failed to recognise the signs that a famine has been unfolding in Africa? Why has it failed to provide humanitarian aid in a timely manner?

The answer to these questions is twofold. Firstly western governments have failed to engage in sustained dialogue with African states to discuss the consequences of policies that rely on force, which displace populations and which disrupt markets and set back development.

Secondly it appears that western governments and tax payers are no longer interested in Africa. Their interests are far more insular, a situation reflected in the domestic issues that dominated the US election and the UK Brexit referendum.

The extent of western interest in Africa, indeed with the global South, is focused on securing the flow of oil and other commodities which underpins their consumption. Coupled with this are determined efforts at stopping illegal migrants and refugees from entering the west. This fact is reflected in the $21 billion cost of Trump’s proposed wall between the US and Mexico and the European Union’s €2.5 billion project to bottle up migrants in Africa to prevent them from reaching Europe.

The current cost of humanitarian assistance for Africa pales into insignificance against such sums.

Too little too late

The famine in Africa is occurring on a much larger scale than in 1980 across the Horn of Africa, in the Central African Republic and in Nigeria where an estimated 40 million people are at risk.

Yet humanitarian assistance has come very late. What’s on offer is too little and it will be delivered too late to prevent large scale death. For instance, the European Union’s pledge of €760 million to the Horn of Africa was only announced in November 2016 while European states made belated and quite small pledges in February this year. The US, for its part, remains the largest provider of food aid but has yet to state what it will pledge to alleviate famine in Africa.

In 1984 public support for Band Aid provided a much-needed kick up the backside to western governments for their failure to respond to the needs of 1 million Ethiopians. It remains to be seen who or what’s going to push the world into action today, for the 40 million Africans who face famine.

John R Campbell, Reader in the Anthropology of Africa and Law, SOAS, University of London