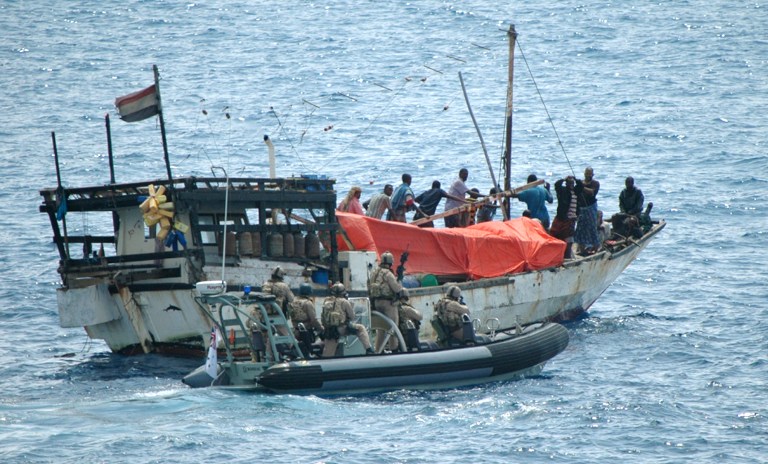 Somali piracy has become a big business that profits large criminal kingpins as well as small investors in the diaspora, even as international efforts have cut back on their earnings, according to European Union and US officials.

Overall, however, Somali piracy has dropped to the lowest rate in more than six years as merchant ships carry better protection on board, and as military vessels from NATO, the European Union, Russia, China and dozens of other countries patrol the Indian Ocean waters.

In addition, 1,435 suspected Somali pirates or their financiers are now in custody or jail in 21 countries, sending an additional negative message to would-be pirates, said Donna Hopkins, coordinator for counter piracy and maritime security at the US Department of State, on Thursday.

She joined Francois Rivasseau, deputy head of the European Union delegation to the US, in briefing reporters at the State Department&39;s Foreign Press Center.

The EU recently took over the chairmanship of the Contact Group on Piracy off the Coast of Somalia from the United States.

Most of the 80 countries involved in the Contact Group do so through their foreign ministries, but Italy also has its finance ministry involved, using its historic ties to Somalia to help track the money flow, Rivasseau noted.

Some of that investment is coming from the successful Somali diaspora, such as that in Minneapolis, Minnesota, which participates in an "informal but sophisticated" underground stock market "where investors can buy shares in hostage taking," Hopkins said, naming just one of the communities that has been identified. In November, a report from the UN office on drugs and crime, Interpol and the World bank, said as much.

"Somali piracy has evolved into a transnational model - from smallscale, locally executed and funded operations into a transnational network with flows of funds, operatives, and resources coming from abroad and proceeds flowing elsewhere," said the report, "Pirate Trails: Tracking the Illicit Financial Flows from Pirate Activities off the Horn of Africa."

The report estimated that up to 413 million dollars was claimed in ransoms between April 2005 and December 2012. Investors rake in anywhere from 30 to 75 per cent of the take.

By making piracy ever more costly for the pirates and investors alike, the programme is trying to convince them that "investing in Wall Street rather than financing piracy" is a better use of their money, Rivasseau said. "

If we track down the financial network, you can strike not only at piracy but also other (illegal) activity," he said.

In terms of human suffering, dozens of hostages have been killed and currently, Somali pirates are holding 49 hostages, mostly from Asia.

The United Nations is trying to deliver medical care to them, which is a "very difficult and dangerous operation," Hopkins said.

Some of the hostages have been held for more than 1,000 days, and if they are ever released, they face damaged careers, health and livelihoods.

The UN and the Maritime Humanitarian Response Organization help to rehabilitate them, Hopkins said.

The two officials dismissed reports that poor Somali fishermen took to piracy because their waters had been over-fished by illegal foreign trawlers or polluted by illegal dumping.

Somalia never had a fishing industry, because Somalis don&39;t like to eat fish, Hopkins said.

There are efforts from the international aid community to build up a fishing industry.

"Even if Somalis don&39;t eat fish, they can certainly (catch), package and sell them," she said.

The Contact Group, founded in 2009, has at any one time 22 to 30 ships from the 80 member nations patrolling off the Horn of Africa.