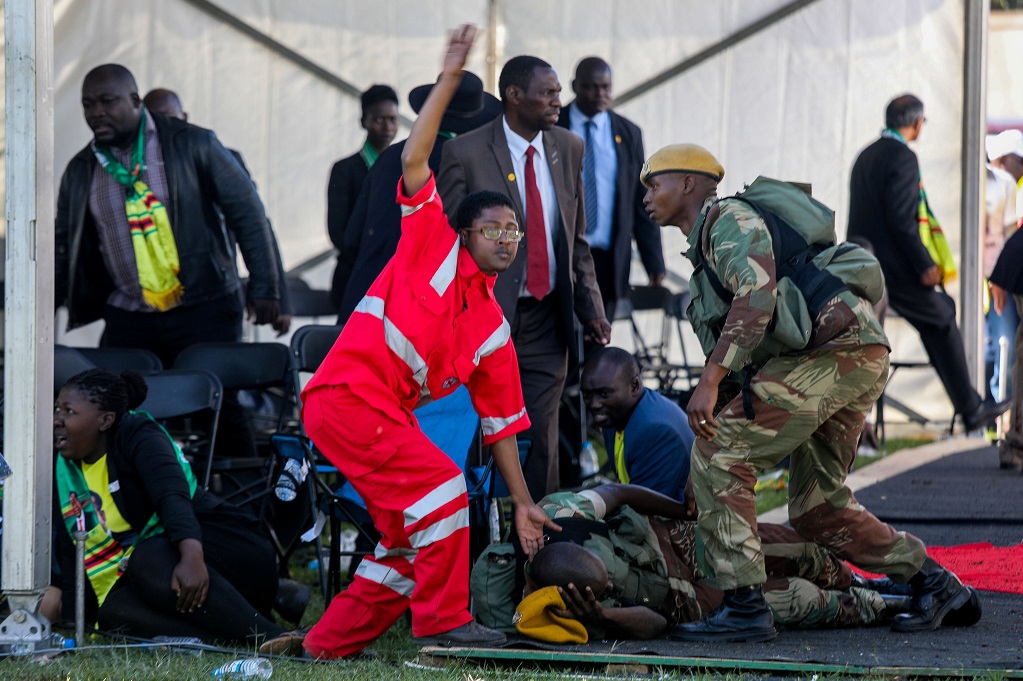 Medics attend to people injured in an explosion during a rally by Zimbabwean President Emmerson Mnangagwa in Bulawayo, Zimbabwe 23 June 2018.

"Unfortunately we have lost two people as a result of the incident on Saturday," Solwayo Ngwenya, clinical director of the city&39;s Mpilo hospital, told AFP.

"People suffered serious life-threatening injuries. Some are undergoing surgery as we speak."

The second fatality was announced several hours after local media reported the first death from the attack.

Footage showed a device exploding and plumes of smoke billowing around Mnangagwa as he descended from the podium after addressing a rally at the White City stadium in Bulawayo, Zimbabwe&39;s second largest city.

It is not known who carried out the attack, and there has been no claim of responsibility.

Mnangagwa, who took power after Robert Mugabe&39;s ouster in November, said he was the target of the attack, which the state media is describing as an assassination attempt.

The act was reminiscent of ZANU-PF’s past 38 years culture of governance in Zimbabwe, characterised by "state-party conflation, fear, capture and coercion," it said.

The opposition party called for a new social contract with citizens which would be accountable to citizens through parliament, a free press, the Constitution and the holding of free and fair elections.

Vice President Constantino Chiwenga, who was among those injured in the attack, said the elections -- the first parliamentary and presidential polls of the post-Mugabe era -- would go ahead as scheduled on July 30.

Elections in Zimbabwe have been marred in the past by violence and charges of electoral fraud.

Mnangagwa has pledged "peaceful, free, fair and credible elections" and called for peace and unity after the attack.

He faces 22 other contenders for presidency although analysts say the real battle is between him and the MDC leader, Nelson Chamisa.