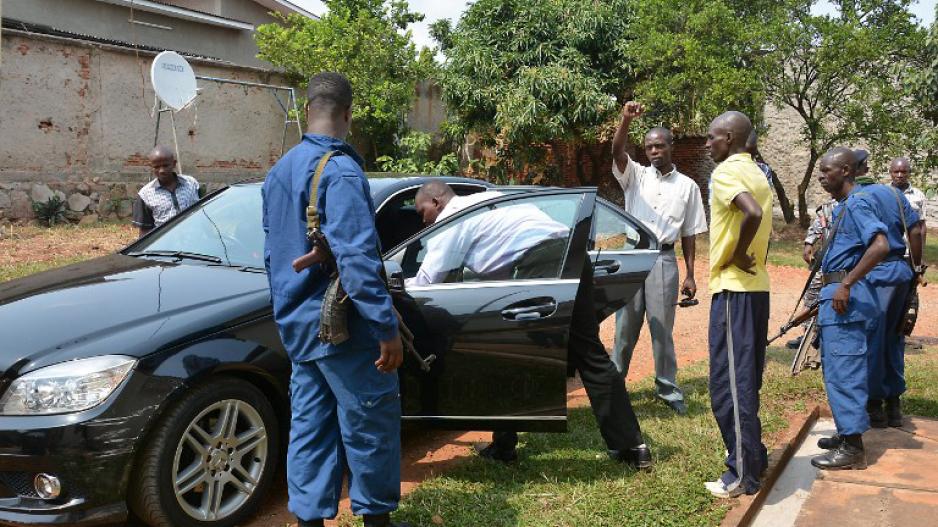 Burundi police officers inspect the vehicle of minister Hafsa Mossi, a close ally of President Pierre Nkurunziza, after she was killed on July 13, 2016 in Burundian capital, Bujumbura, according to the police spokesman, Pierre Nkurikiye.

"Hon. Mossi assassinated 10.30 in Gihosha", in the east of Bujumbura by, "two criminals in a vehicle," police spokesman Pierre Nkurikiye said on Twitter.

I grief https://t.co/IbrPyS5on6 Hon. HafsaMossi thanks for the support you accorded me as I took over as SG EAC pic.twitter.com/necRqnoYIk

Mossi, a former journalist in her 50s who previously worked as a journalist at the BBC’s Swahili Service, was a member of President Pierre Nkurunziza&39;s ruling CNDD-FDD party.

Our former BBC colleague, Hafsa Mossi, who went on to become a politician in Burundi has been assassinated: https://t.co/moDhtAD4Af

"The assassination of Hafsa Mossi is a despicable and cowardly act," Nkurunziza tweeted.

"This is an inestimable loss for Burundi, her family and the whole EAC (East African Community)," he added.

Mossi was Burundi&39;s information minister and government spokeswoman between 2005-2007, and at the time of her death was a member of the East African Legislative Assembly, a regional parliament.

Foreign Minister Alain-Aime Nyamitwe called her death "a great loss for the nation".

Saddened by the assassination today in Bujumbura of Hon. Hafsa Mossi, an EALA member. A great loss for the Nation and the EAC.

Nkurunziza&39;s controversial but ultimately successful bid for a third term last year triggered a deadly crisis that has left more than 500 people dead and driven around 270,000 to leave the country.

Several senior military officers close to the president have been assassinated since the start of the crisis in April 2015, but Mossi, who was not regarded as a party hardliner, is the first senior politician to be killed.

She had stayed very quiet since the beginning of the crisis and the motive for her murder remained unclear.

READ: Protests against me are illegal - Nkurunziza

An investigation was swiftly opened.

Louise Mushikiwabo, the foreign minister of neighbouring Rwanda, which has difficult relations with Burundi, spoke on Twitter of a "good woman and a dedicated politician. Rest in Peace my sister!"

I&39;m shocked. My elder Sister Hafsa Mossi Member of the @EA_Bunge has passed away, shot by criminals. R.I.P Burundi

Amnesty International called for an independent enquiry into Hossi&39;s assassination.

"Hafsa Mossi’s death, the latest in a disturbing string of high-profile killings, is a great loss to the people of Burundi and the East African region,” said Amnesty&39;s regional director Muthoni Wanyeki.

"Her murder must be promptly, independently and impartially investigated, and those reasonably suspected of responsibility held to account in fair trials.”

Burundi—MP Hafsa Mossi who was assassinated today is being buried before sunset in accordance w/ Islam traditions pic.twitter.com/5aDqhWAIWc