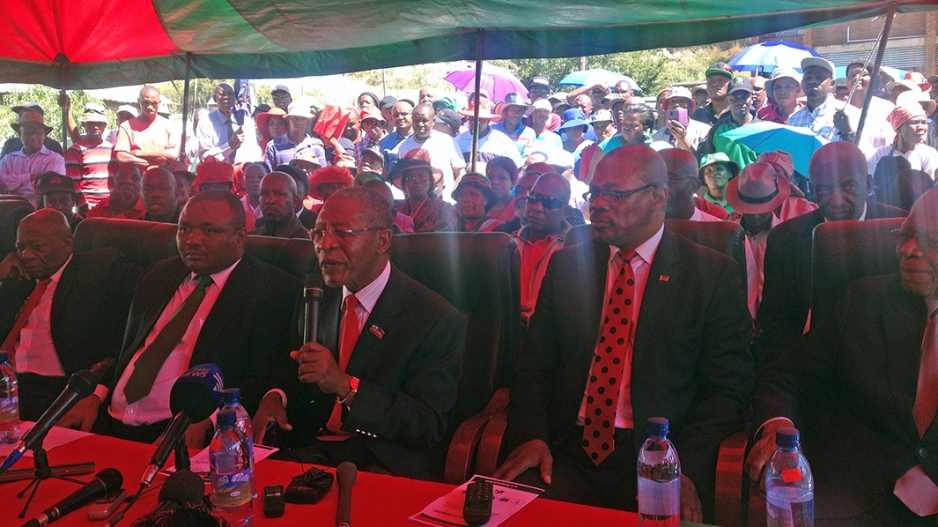 Former Lesotho Prime Minister Pakalitha Mosisili (centre) is seen with his coalition partners on 04 March 2015. Lesothos February 28 election did not produce an outright winner paving the way for a coalition government.

MASERU - After months of political and security instability, Lesotho will once again be led by a coalition government.

This after an early election followed an attempted coup in August 2014.

Ramaphosa secured a Maseru peace accord that led to elections just three years since the last vote.

“We are grateful for the role Cyril Ramaphosa played of facilitating our route to elections now the people have spoken,” said Democratic Congress (DC) leader and former prime minister, Pakalitha Mosisili.

Mosisili ruled Lesotho for 15 years until he was replaced by Thabane in 2012 following elections that resulted in a coalition government.

In the February 28 election, Thabane’s All Basotho Convention (ABC) party received 40 of the 80 constituency seats while Mosisili’s DC received 37.

The Lesotho National Assembly is made up of 120 seats, 80 constituency seats and 40 from proportional representation (PR).

On Thursday, the Independent Electoral Commission (IEC) of Lesotho, led by Justice Mahapela Lehohla, announced the final seat countss including the 40 PR seats.

ABC received 46 seats and the DC received 47 seats in parliament – a neck-and-neck race that laid the road for a coalition government.

Finally, Mosisili came out top after securing a coalition with six other parties to have 65 seats in parliament.

With a likely government in play, the IEC said it’s work is done and although it was a strenuous few months, SADC played a huge role.

The IEC&39;s Lehohla commended Ramaphosa for his role in the Lesotho elections, manning and managing "the process in search of viable solutions to the political crisis in Lesotho and providing support of security for law and order in the country during this trying period.”

Mosisili said when he returns to the helm – after three years – he will review key appointments and dismissals by the previous government.

Most notable is Army General Kamoli who was fired by Thabane and has been accused of orchestrating the  August 2014 attempted coup.

But Mosisili said high on his agenda is the constitution of the tiny mountain kingdom.

“We will review the constitution of Lesotho. I think it is long over due – so we will establish a constitutional review commission that will come up with a new constitution for Lesotho which will address all these issues including that of a coalition government,” he said.

After an attempted coup, a regional intervention and an early election, Lesotho’s likely leader says it’s time for the tiny mountain kingdom to solve it’s own problems in the future.