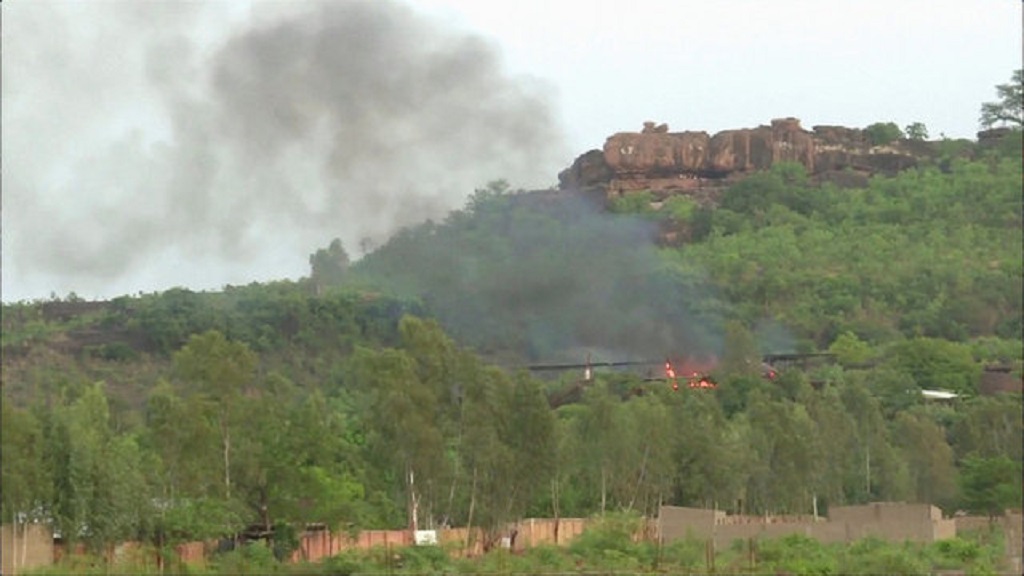 Flames rise following an attack where gunmen stormed Le Campement Kangaba resort in Dougourakoro, to the east of the capital Bamako, Mali in this still frame taken from video June 18, 2017. REUTERS

BAMAKO - Unidentified gunmen killed four guests at a Mali luxury resort popular with Western expatriates just outside the capital Bamako, and one other guest is still missing, a security source at the scene said on Monday.

One of the victims of Sunday's attack was Portuguese and one Cameroonian, the security source said. Authorities had on Sunday confirmed two deaths and identified one as French-Gabonese. The source said the fourth victim had not been identified.

Security forces backed by French and UN. troops mobilised quickly when the attack was underway, rescuing 36 residents including 13 French citizens.

Security Minister Salif Traore told Radio France International on Monday that "five terrorists were killed" in operations that continued throughout the night.

"This was without doubt a terrorist attack," he told the radio station.

The resort was still cordoned off by late morning on Monday as a Malian anti-terrorist squad combed the area for the missing person, a Reuters witness said. A UN. mission helicopter was circling overhead.

Traore said the militants had some accomplices who had not been killed or detained. On Sunday night, authorities reported that two of the assailants had been killed.

No group has yet claimed responsibility for the attack.

French troops and a 10,000-strong UN. peacekeeping force have been battling to stabilise Mali, a former French colony, ever since France intervened in 2013 to push back jihadists and allied Tuareg rebels who had taken over the country's desert north a year earlier.

Al Qaeda in the Islamic Magreb and other Islamist groups have claimed attacks on Western targets in Mali and the wider West Africa region in the past.

French President Emmanuel Macron spoke to the leader of Mali after the attack and pledged France's full support for the country, Macron's office said on Monday.

"I am tired, shocked. I have no other words to say," the resort owner Manou Morgane, a French national, told Reuters TV overnight. "All I want to do is to see the list of my clients. I want to find them (anyone missing)." (Writing and additional reporting by Tim Cocks in Dakar; Editing by Hugh Lawson)