France prepares for long fight against Islamists in Africa's Sahel 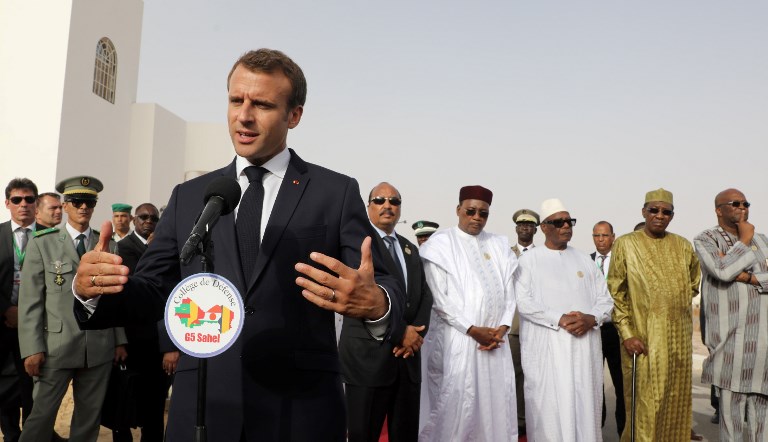 File: French President Emmanuel Macron delivers a speech during a press conference ahead of a G5 Sahel force meeting on July 2, 2018, in Nouakchott.

PARIS - Days before French President Emmanuel Macron visited West and Central African leaders this week to talk security, Islamist fighters sent a defiant message -- a suicide attack on the headquarters of a five-nation force that is supposed to take the lead in fighting terrorism in the region.

Last year Burkina Faso, Chad, Mali, Mauritania and Niger agreed to set up the 5,000-member force dubbed the "G5 Sahel", urged along by pledges of training and support from France.

The countries have been hit by jihadist attacks that have steadily worsened in the past two years, claiming hundreds of lives and displacing hundreds of thousands of people -- prompting many to seek refuge in Europe.

Macron&39;s trip was aimed at bolstering the fledgling multinational effort in order to reduce the role played by French troops in fighting jihadists and criminal smuggling groups in the vast and arid Sahel region.

Around 4,000 French troops, known as the Barkhane deployment, have been pursuing insurgents since 2014 across the desert expanse, an area half the size of the United States.

The G5 Sahel force is also expected to eventually replace the UN&39;s MINSUMA peacekeeping mission in Mali, which has deployed 15,000 military personnel and police since 2013.

Although French officials avoid any mention of a quagmire, analysts say the increase of deadly and more elaborate strikes has cooled any hopes of a quick return for the French soldiers.

"It&39;s a reconstruction effort of their armies, but getting there is going to take a long time, at a time when the security situation is getting worse," said Alain Antil, head of the African Studies Centre at the French Institute for International Relations (IFRI).

But the few missions carried out by the G5 Sahel so far have not been encouraging, not least because of real-time communication problems between the multiple forces.

Its full operational launch has also suffered several delays due to financial problems: little of the nearly 420 million euros (R665-bln) of promised funding has been received.

In the meantime, the French troops based mainly in Mali carry out relatively short operations from bases which regularly come under attack, their convoys at risk of landmines hidden along their routes.

Despite successes in neutralising small groups of jihadists and taking back control of some areas, they have so far been unable to curtail the threat of Islamist violence.

And French officials are well aware that the longer their soldiers stay in the countries, the risk that locals will begin to resent their presence will grow.

"The United States tried this all-security approach in Afghanistan, and the Taliban are now stronger than ever," said Bakary Sambe, a researcher at the Timbuktu Institute in Dakar.

"The French are doing the same in northern Mali, and the jihadists have not disappeared but are multiplying," he said.

G5 Sahal leaders have vowed to press ahead after last Friday&39;s attack on the force&39;s base in Sevare, central Mali, where a suicide bomber used a vehicle painted in UN colours to strike the building&39;s entrance, killing three including two soldiers.

It was one of five separate attacks in Mali and neighbouring Niger which have killed 25 people in a week, as Macron was meeting with the leaders of the G5 nations in Nouakchott, Mauritania, on the sidelines of an African Union summit.

"They don&39;t have the capabilities to take control of territory, but they are able to inflict damage," Antil said of the jihadists.

The French army&39;s chief of staff, Francois Lecointre, had already warned in February that it would require at least 10 to 15 years to rebuild the Malian army alone.

"The situation developing in Mali is hardly satisfactory and we won&39;t be leaving tomorrow, though that doesn&39;t mean we&39;re in a quagmire," he said.

Yet without sustained funding, even G5 leaders say the force will struggle to become an effective element in ridding the region of jihadists as well as the violent gangs of drugs and people-smugglers.

The G5 countries themselves are paying 10 million euros each.

Over the past year, its soldiers have carried out just three missions with heavy logistical support from France, which some critics have derided as media operations.

The force may also struggle to win over the hearts and minds of locals -- last week the UN said Malian soldiers in the force "summarily" executed 12 civilians at a cattle market in central Mali in May in retaliation for the death of a soldier.

"The G5 force was seen by some as a possibility for France to disengage from the region, but I don&39;t see it happening," said Sambe.