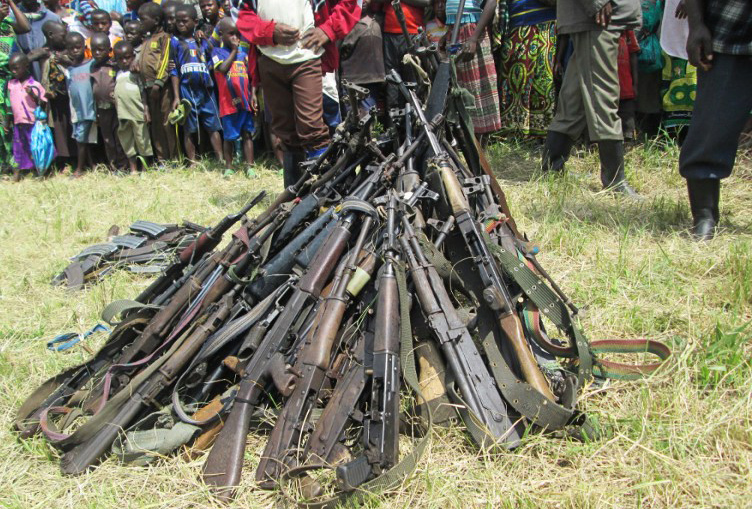 Children and members of the Democratic Forces for the Liberation of Rwanda (DFLR) rebel group stand in front of weapons during an arms surrender ceremony, in Kateku, North Kivu.

PARIS - France's highest court ruled Friday that a researcher could be denied access to sensitive archives concerning the 1994 genocide in Rwanda even though they were ostensibly opened to the public in 2015.

Researcher and author Francois Graner, who has written a number of works on the genocide, cannot see the files because of a law protecting presidential archives for 25 years following the death of a head of state, the constitutional council ruled.

Kigali's minority Tutsi-led government has accused France, under then-president Francois Mitterrand, of supporting the Hutu regime that carried out the bulk of the killings, in which around 800,000 mostly Tutsi people died.

The constitutional council said its ruling applied to the archives of former presidents, prime ministers and ministers.

As Mitterrand died in 1996, his archives should become available in 2021.

The court said its ruling was "justified in the general interest" and that it did not undermine freedom of expression, rejecting Graner's argument that the 25-year rule flouted several constitutional rights.

The French presidency under Francois Hollande announced the declassification of archives on Rwanda for the period 1990-95 on 7 April 2015.

At the time it was considered a strong gesture, coming on the 21st anniversary of the start of the genocide in the former Belgian colony.

The president's office, saying the move was motivated by a "wish for truth", opened the files to researchers, victims' associations and civil society groups.

But when Graner tried to consult Mitterrand's archives from the time of the genocide he was refused.

"It's obviously a disappointment," Graner said of Friday's ruling. "The motivations of this decision are political."

Graner plans to take his case to the European Court of Human Rights, "which isn't encumbered by such political considerations", he said.