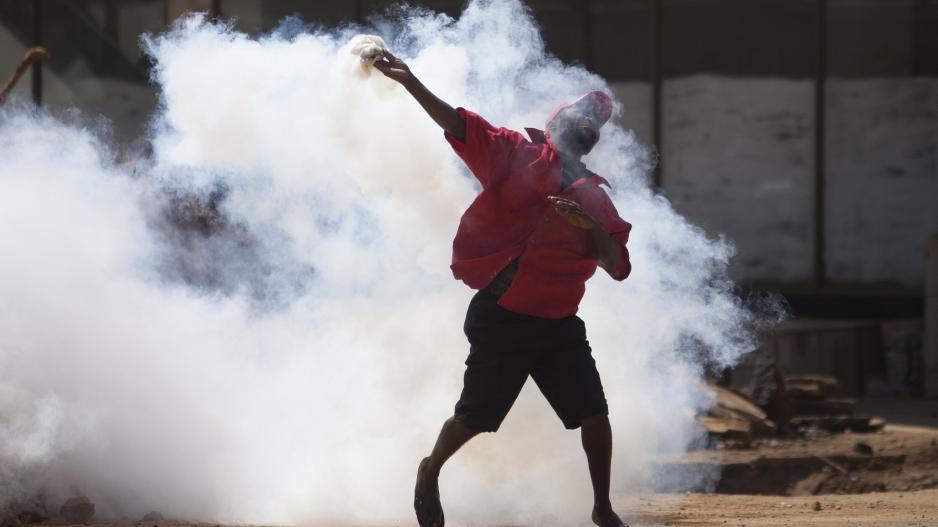 A supporter of Zimbabwe Opposition Party Movement for Democratic Change Tsvangirai faction throws back a tear gas canister as protesters clash with police during a march against Police Brutality on August 24, 2016 in Harare, Zimbabwe.

HARARE – Riot police in Zimbabwe fired tear gas on Friday to break up the first anti-government protest in Harare since a court overturned a ban on street marches, an organiser said.

Hardlife Mudzingwa, spokesman for Tajamuka, a youth protest movement, said police blocked about 30 demonstrators marching towards parliament in the capital.

"We were singing and marching peacefully and the police blocked us," Mudzingwa told AFP.

READ: Mugabe will be gone by December: Tajamuka

"We refused to back down and when they realised we were not stopping, they fired tear gas."

Authorities had banned rallies in the capital following a wave of violent clashes between police and protesters.

President Robert Mugabe has vowed to crack down on the protests, which have erupted in recent months as Zimbabwe has been pitched into a deepening economic crisis.

Mudzingwa said Friday&39;s march was against "police brutality and the threat by President Robert Mugabe to judges".

On Wednesday, the government announced plans to slash 25,000 jobs after it revealed that nearly 97 percent of its revenue goes towards public workers&39; salaries.

Soldiers and civil servants have regularly been paid late this year, heightening pressure on Mugabe, 92, who came to power in 1980 and has vowed to stand for re-election in 2018.