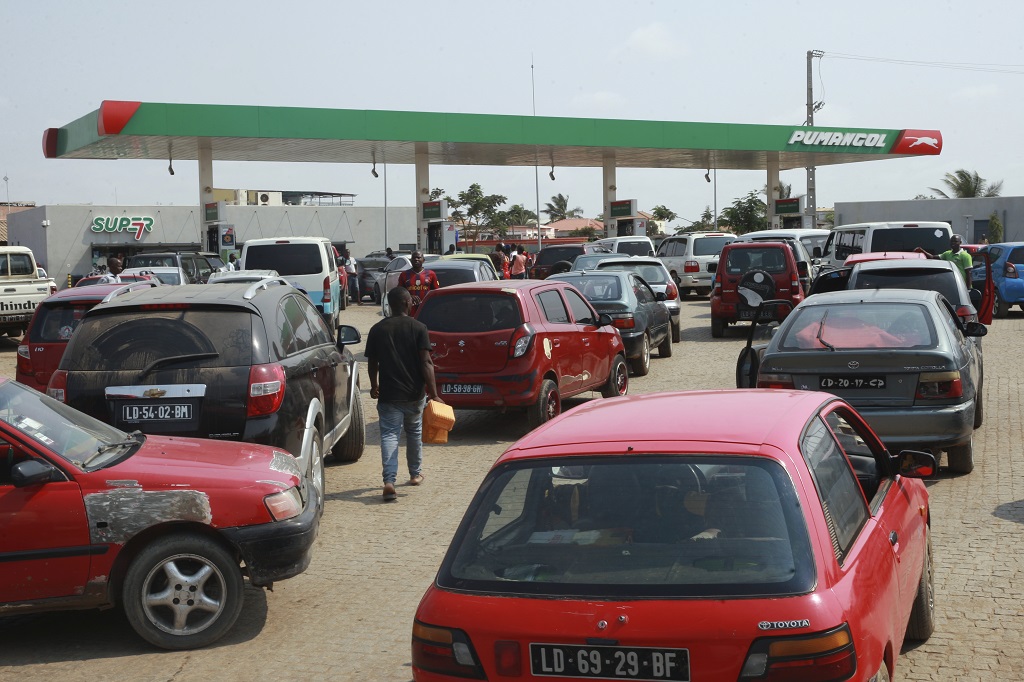 Luanda residents queue with their cars at a gas station on December 21, 2017 in Luanda, Angola.

LUANDA - Angola has suffered a week of fuel shortages, a bitter irony for one of Africa&39;s leading oil producers, and a hardship that some people blame on opponents of President Joao Lourenco.

The majority of petrol stations in the capital Luanda have had long lines of motorists for seven days now, all waiting for the chance to fill up their tanks.

"We don&39;t have any more," said Henriques Carvalho, a pump attendant in the Bairro Popular district.

"They came here to refuel but demand has been so great that we sold our last few litres tonight. I&39;m waiting for the next tanker."

In front of each pump, lines of trucks and cars stretch out of view.

"I&39;ve been queueing for two hours," said Gisela Manuela from behind the wheel of her sedan.

"I&39;ve already tried three other petrol stations - all in vain. Hopefully it will be better here."

Several other filling stations in provinces outside Luanda have also run dry, according to residents contacted by AFP.

Rationing has caused the price of fuel to surge on the black market. One litre of super unleaded has more than tripled in Luanda - surging from 160 to 500 kwanzas (R12.18 to R38.06).

Though the impacts of the shortages are clear for all to see, the reasons are not.

A week ago the state oil company Sonangol acknowledged "delays in processing fuel at the country&39;s ports because of minor issues around the payment of certain suppliers".

But in a statement Sonangol insisted that it was "not short of fuel" and that there was "no reason to be alarmed".

It promised that the rationing was simply to guarantee supply during the festive year-end period.

Sonangol declined to comment further when contacted by AFP.

Angola, along with Nigeria, is one of Africa&39;s biggest oil producers, pumping 1,7 million barrels per day.

But because there is no domestic refining capacity, processed petrol and diesel must be imported from abroad.

The drop in the price of oil, the country&39;s economic lifeblood, since 2014 has plunged the economy and the government&39;s finances into a crisis from which Angola has struggled to extricate itself.

Sonangol, which makes the largest annual contribution to state coffers, has found itself in particularly dire financial straits.

In March last year Angola was struck by shortages which were again blamed on "delayed payments" to suppliers caused by the weak oil price.

In the absence of another explanation, critics of Angola&39;s government have made their own allegations about the reasons for the shortages, fired by social media speculation.

"All of this is an attempt to obstruct the government of President Joao Lourenco," said Agostinho dos Santos, a political analyst with close ties to the opposition.

"The majority of filling stations in Angola belong to or are controlled by the generals who were in the regime of the former president (Jose Eduardo dos Santos) and his daughter Isabel dos Santos. These owners want to avenge the old president."

Dos Santos quit the presidency following elections in August after 38 years in power, during which time he stood accused of corruptly enriching his friends, families and allies.

Lourenco, from the same party, promised to fight corruption and subsequently began a crackdown on graft and waste.

After taking office he quickly fired a number of leaders at state-run companies as well as several security chiefs who were seen as close to his predecessor.

His main victim was Isabel dos Santos, who was removed from the helm of Sonangol last month.

"This fuel shortage is only a facade," said Adao Bunga, a rapper and regime critic known as MC Life.

"The immunity and impunity of Dos Santos&39;s generals has gone and they are angry, which is why they are attacking Dos Santos."

But drivers, the main victims of the shortages, have begun to lose patience.

"We can&39;t live without petrol," said Isaias Soares, a driver from Malanje, about 380 kilometres (240 miles) east of Luanda.

"Frankly I can&39;t understand how we can have a shortage in a country that produces oil."