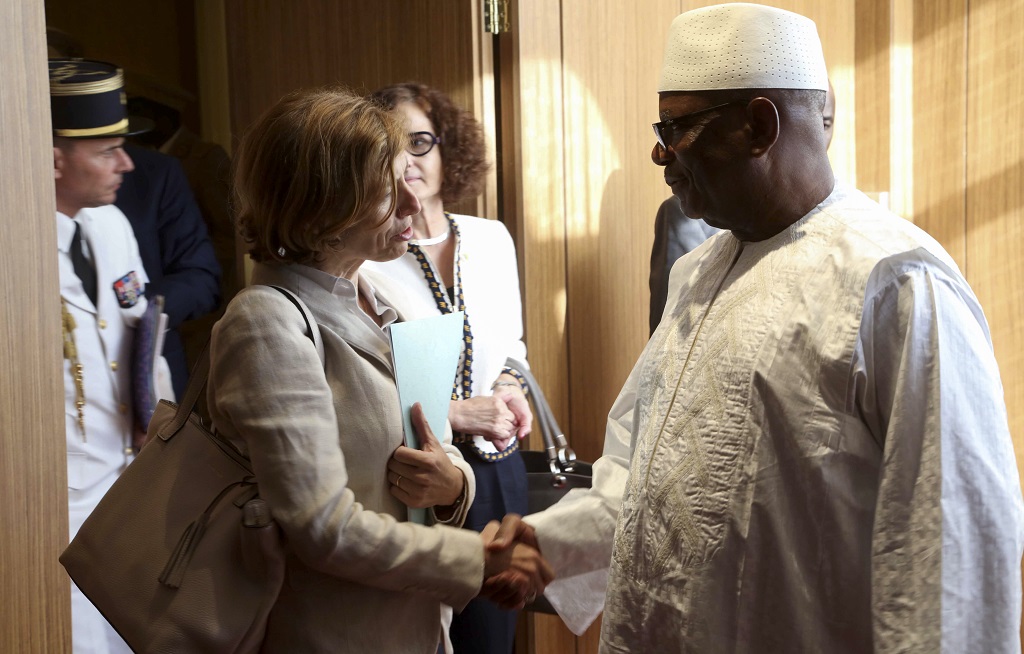 French Defence Minister Florence Parly (L) is welcomed by Malian president Ibrahim Boubacar Keita (R) upon her arrival in Bamako, on August 1, 2017, as part of a Sahel tour to discuss the fight against jihadist insurgents.

SEVARE, Mali - An appeal by Sahel region countries for help in their battle against jihadist violence received a boost Sunday when a visiting UN Security Council ambassador pledged support.

"I can assure you Burkina Faso and the G5 Sahel Countries will get the support they need," said Ethiopian ambassador Tekeda Alemu, who co-presided with his French and Italian colleagues in the 15-strong UN delegation ending a five-day visit to the region.

The trip came on the initiative of France, which is presiding over the UN Security Council this month.

The so-called "G5 Sahel" states - comprising Burkina Faso, Chad, Mali, Mauritania and Niger - are to launch the first operation against the jihadists at the end of October but lack funding for equipment and training.

Earlier Sunday, the ambassadors had visited the command headquarters in the central Malian town of Sevare for talks on the security crisis in the region.

READ: One soldier dead in attack on UN base in Mali

Sevare is just east of Mopti, in central Mali, an area which has seen a severe worsening of security in recent months, giving greater urgency to a G5 move to relaunch a joint regional force initially created in November 2015.

On Saturday the ambassadors had expressed frustration at delays in the implementation of a 2015 Malian peace accord.

Force commander and Malian general Didier Dacko said before Alemu&39;s statement that he was waiting for "fundamental political support" from the Security Council.

The vast Sahel region has turned into a hotbed of violent extremism and lawlessness since chaos engulfed Libya in 2011, the Islamist takeover of northern Mali in 2012 and the rise of Boko Haram in northern Nigeria.

A fresh attack in Niger&39;s restive south-west, which borders Mali, killed 13 paramilitary police on Saturday, just weeks after a deadly ambush on a joint US-Niger patrol.

UN Secretary-General Antonio Guterres warned last week that the Sahel region was descending into all-out violence and said the world body must help the region confront the threat from Islamist militants.

He put forward four options to back the force, including setting up a UN support office in the Sahel and sharing resources from the 13,000-strong peacekeeping mission in Mali.

A UN meeting on support for the force is scheduled for October 30, as well as a donor conference in Brussels in December.

Mali has become particularly volatile since 2012 when jihadist groups captured the entire north of the country.

On Friday, Mali&39;s parliament agreed on a three-month extension of a state of emergency because of the "continuing threat" of armed groups.

Entire zones still escape the control of Malian and foreign forces, despite a military intervention by France in 2013.