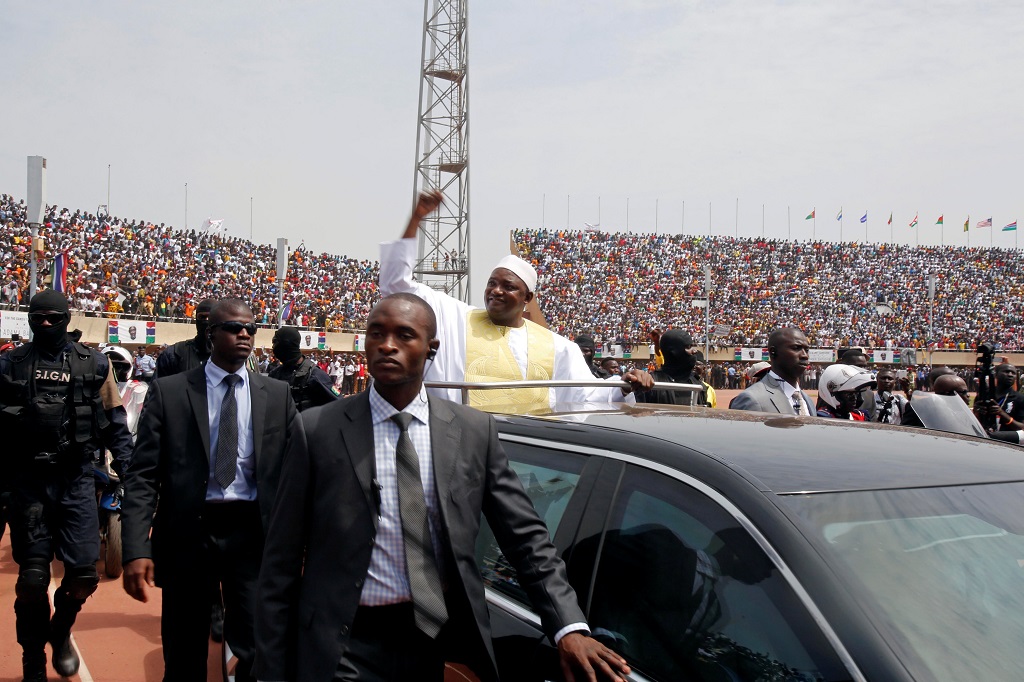 Gambian President Adama Barrow arrives for the swearing-in ceremony and the Gambia's Independence Day at the Independence Stadium, in Bakau, Gambia February 18, 2017.

BAKAU, Gambia - Thousands of supporters gathered Saturday to finally celebrate the inauguration of Gambian President Adama Barrow, a month after he was sworn in across the border in neighbouring Senegal during a tense power struggle.

February 18 is also the anniversary of The Gambia's independence from Britain, but many are also calling the day the birth of a third republic following the ousting of Yahya Jammeh at the ballot box.

BREAKING: Adama Barrow, officially being sworn-in as #Gambia's new president in a inauguration ceremony in the capital #Banjul. #Africa pic.twitter.com/7aPtnrM0R9

The festivities began Saturday morning at Independence Stadium in Bakau, west of the capital, and were to be attended by several African heads of state as well as high-ranking diplomats.

The Gambia's first leader, Dawda Jawara, who governed from independence in 1965 until the 1994 coup mounted by Jammeh, has also been invited, organisers told AFP.

Crowds of hundreds began to gather as early as 3:00am.

"I spent the night here at the stadium. This is to ensure that I can have a smooth passage inside", said Isatou Dibba, a Barrow supporter.

Can't think of anything more patriotic than the Gambian flag @TheJamaJack face on it pic.twitter.com/c9MmpImEA5

US and British diplomats were finding it difficult to enter the stadium, an AFP correspondent reported, as people who had not been able to get inside massed against a heavy security presence.

Barrow will retake the oath of office he first made at the Gambian embassy in Senegal, whose territory almost entirely surrounds The Gambia and whose president, Macky Sall, is seen as Barrow's closest ally.

Later he will address the nation, and 52 pigeons, representing each year of independence from Britain, will be released.

The swearing-in ceremony on January 19 was held at a fraught time for the tiny west African nation, as Jammeh was refusing to step aside and acknowledge the result of the election Barrow won several weeks earlier.

Senegal spearheaded efforts to deploy west African troops in The Gambia after Jammeh's departure, in order to secure a country whose military forces were riven with factions still loyal to the ex-leader.

Around 500 Senegalese, Ghanaian and Nigerian soldiers remain in the country and were helping provide security for the celebrations on Saturday.

President Sall is a guest of honour at the ceremony, while Liberian leader Ellen Johnson Sirleaf, who pushed for mediation efforts with Jammeh during his last days in office, is also expected.

Mauritanian President Mohamed Ould Abdel Aziz was to attend, another key mediator during the nation's crisis, along with US Assistant Secretary of State Linda Thomas-Greenfield, in a sign of efforts to reset ties with the West.