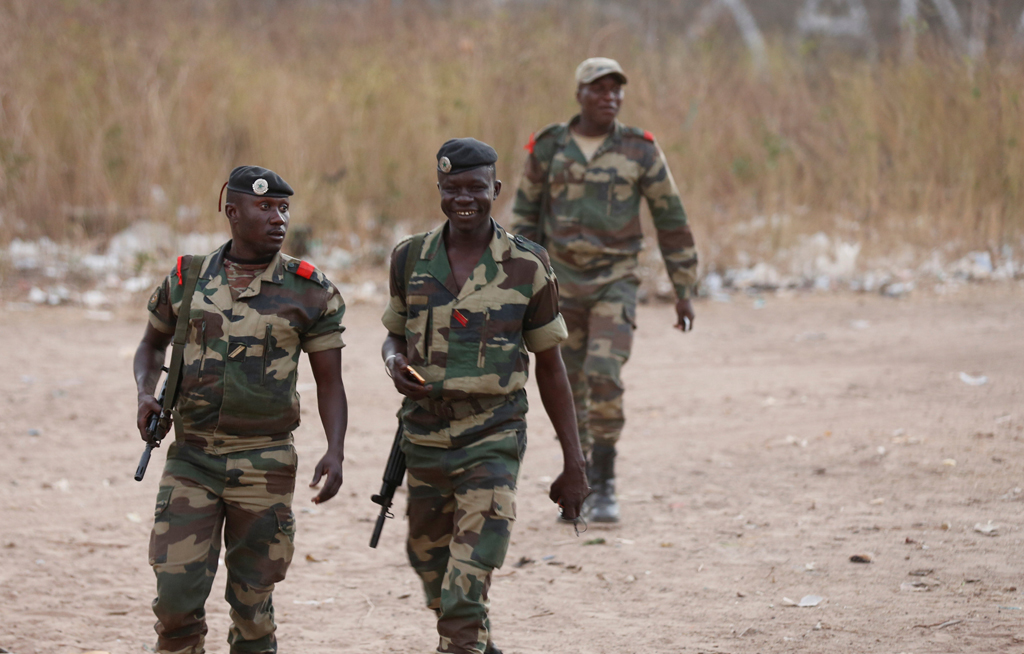 ECOWAS soldiers are seen carrying out a patrol at the border of Gambia in Karang, Senegal January 20, 2017.

BANJUL - Gambia's Yahya Jammeh, who led his country for 22 years but refused to accept his election defeat last month, has agreed to step down and go into exile, a senior advisor to new President Adama Barrow on Friday.

The news came as regional armies, who entered Gambian territory late on Thursday, were poised to remove Jammeh by force just hours after the army chief recognised Barrow as commander-in-chief.

"I can assure you that he has agreed to leave," Mai Ahmad Fatty, head of Barrow's transition team and now his special advisor, told Reuters in Senegal's capital Dakar.

He could not say where Jammeh would go into exile.

Barrow, who won the December 1 poll by a slim margin, was sworn into office at Gambia's embassy in the Senegalese capital of Dakar on Thursday and immediately called for regional and international support.

West African militaries announced soon after that they had crossed into Gambia, which is almost completely surrounded by Senegal.

"The rule of fear has been banished from Gambia for good," Barrow told a crowd gathered at a Dakar hotel on Friday. "To all of you forced by political circumstances to flee our country, you now have the liberty to return home."

Gambia's army chief General Ousman Badjie, who had been perhaps the last remaining pillar of support for Jammeh, said he would welcome, not fight, the regional force.

"We are going to welcome them with flowers and make them a cup of tea," he told Reuters. "This is a political problem. It's a misunderstanding. We are not going to fight Nigerian, Togolese or any military that comes."

The military operation was halted late on Thursday to give mediation a chance. A midday deadline was extended on Friday as negotiations, which diplomats said were focusing on a deal to grant Jammeh immunity from prosecution, continued.

"There is a real possibility this could work. I don't think he is going the (Saddam) Hussein route," said a regional diplomat, referring to the Iraqi leader who was arrested in 2003 following an invasion, then tried and hanged.

A senior official from regional bloc ECOWAS, under whose mandate the military operation was launched, said late on Thursday that there was no question that Jammeh would be allowed to remain in Gambia, even if he agreed to step down.

Jammeh, in power since a 1994 coup, initially conceded defeat to Barrow following a December 1 election before back-tracking, saying the vote was flawed and demanding a new ballot.

Late on Thursday, he dissolved the government - half of whose members had already resigned - and pledged to name a new one.

His estate, located almost on the border with Gambia's sole neighbour Senegal, was heavily fortified on Friday, witnesses said.

ECOWAS says its intervention, dubbed Operation Restore Democracy, involves 7,000 troops and is backed by tanks and warplanes. Its forces entered Gambia from the southeast, southwest and north.

Reuters witnesses saw the arrival of a fresh convoy of more than a dozen trucks loaded with heavily armed Senegalese soldiers arrive at Gambia's border, near the Senegalese town of Karang, on Friday afternoon.

The size of Gambia's army is unclear, but estimates of range from 800 to up to 2,500 soldiers.

While Barrow's election victory last month and inauguration on Thursday were celebrated by many across the tiny nation of less than 2 million people, support for Jammeh remained strong among some Gambians opposed the military intervention.

"Why should the other countries interfere. Why should they force him to leave?" said Momodou Badji, 78, in Banjul's Kanifing neighbourhood.

Gambia is of little strategic significance. But if a peaceful transition of power fails, it would be a setback for the advance of democracy in Africa.

During his 22-years in power, Jammeh, who once vowed to rule Gambia "for a billion years", has been accused by rights groups of torturing and killing perceived opponents.

Yet Gambia remains a popular holiday destination for European tourists drawn to its tropical beaches.

Streets in the capital were mostly deserted for much of Friday and shops, restaurants and petrol stations were shut. But residents began to emerge after nightfall, some of them playing football in the streets.

The UN refugee agency UNHCR said about 45,000 people, mainly children, have fled to Senegal since January 1 amid growing fears of unrest. Thousands of tourists have also left this week.