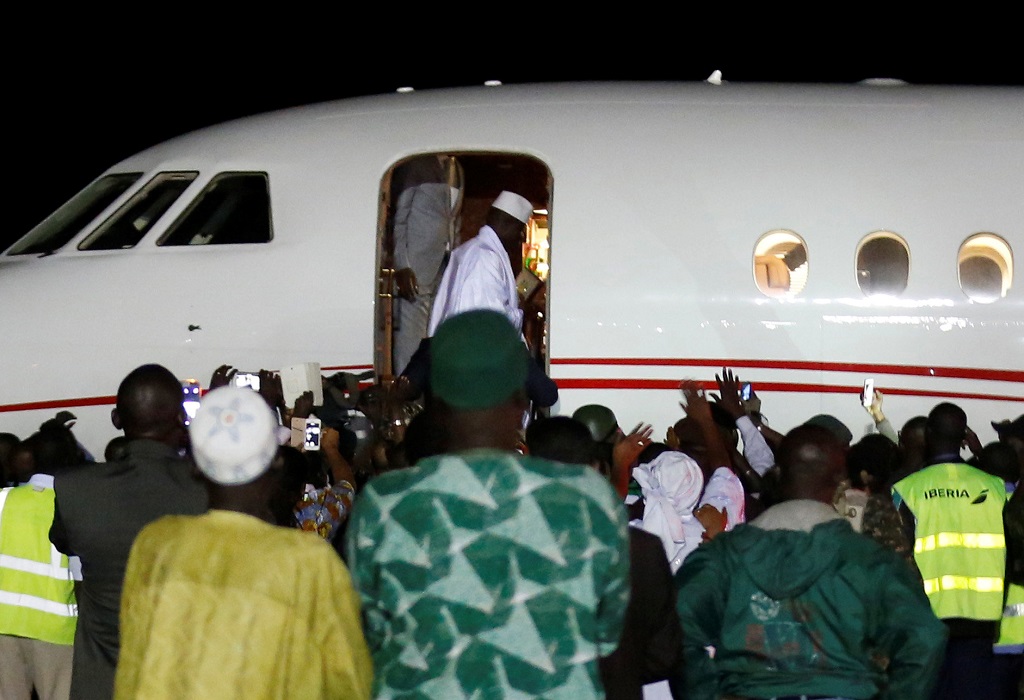 Former Gambian President Yahya Jammeh boards a plane at the airport to fly into exile from Gambia, January 21, 2017.

BANJUL - Gambian leader Yahya Jammeh flew out Saturday from the country he ruled for 22 years to cede power to President Adama Barrow and end a political crisis.

Jammeh refused to step down after a December 1 election in which Barrow was declared the winner, triggering weeks of uncertainty that almost ended in a military intervention involving five other west African nations.

The longtime leader, wearing his habitual white flowing robes, waved to supporters before boarding a small, unmarked plane at Banjul airport alongside Guinea's President Alpha Conde after two days of talks over a departure deal.

He landed in Conakry, Guinea's capital but set off again for Equatorial Guinea, where he will remain in exile, the president of the Economic Community Of West African States (ECOWAS), Marcel Alain de Souza, said at a Dakar press conference.

"No legislative measures" would be taken that would infringe the "dignity, security, safety and rights" of Jammeh or his family, ECOWAS said in a joint declaration with the African Union and United Nations.

I must also express profound gratitude to ECOWAS, AU, the Security Council of the UN and all nations who stood by us. #newgambia

Jammeh could return to The Gambia when he pleased, the statement added, and property "lawfully" belonging to him would not be seized.

Jammeh finally said he would step aside in the early hours of Saturday morning and hand power to Barrow, who has been in neighbouring Senegal but is expected back in The Gambia imminently.

"I call on President Barrow to come in immediately and take over the supreme responsibility of president, head of state, commander in chief and first citizen of our republic," Jammeh said, according to remarks read out on state television before he left the country.

It would be improper not to "sincerely wish him and his administration all the best," he added.

Jammeh took power in a 1994 coup from the country's only other president since independence from Britain, Dawda Jawara, making this The Gambia's first democratic transition of power.

The choice of Equatorial Guinea for his exile helps ease concerns that Jammeh might interfere in his nation's politics if he stayed in Guinea, whose border is not far from The Gambia's eastern region.

Scenes of jubilation broke out almost immediately on streets near Banjul, the port capital, after the news filtered out that Jammeh had gone.

"We are free now. We are no longer in prison. We do not have to watch our back before we express our opinions," said Fatou Cham, 28, who was celebrating with her friends.

Activists will be keen to see Jammeh - who controlled certain sections of the security forces - refused amnesty for crimes committed during his tenure, which was marked by systematic rights abuses.

Jim Wormington, West Africa researcher at Human Rights Watch, called Jammeh's departure "the chance to usher in an era based on respect for the rule of law and human rights."

Jammeh attempted to build a personality cult and has left behind a small minority of diehard supporters, some of whom wept as his plane departed.

"We wanted to be behind this man for a century or more," said Alagie Samu, speaking on the tarmac. "He is the most successful, visionary leader in the entire world."

Dressed in green, the colour of his political party, some were loyal to the end.

"No human being is perfect, but for 22 years in the country here he has tried hard for Gambians," said a woman with cheeks wet from tears, who did not wish to be named.

READ: I wasn't forced to step down: Gambia's Jammeh

The Gambia is one of the world's poorest nations and although education and health standards have lifted in recent years, poverty remains endemic.

With Jammeh gone, all eyes will be on the Barrow administration as they make their first steps as a government of reform and development.

"The will of the people has come to be at last," said Isatou Touray, a key official in the government-in-waiting.

"Democracy is back, you can't stop the people."

The first priority will be to help the tens of thousands who have fled in recent weeks fearing a bloody end to the crisis to return safely, Touray said earlier Saturday.