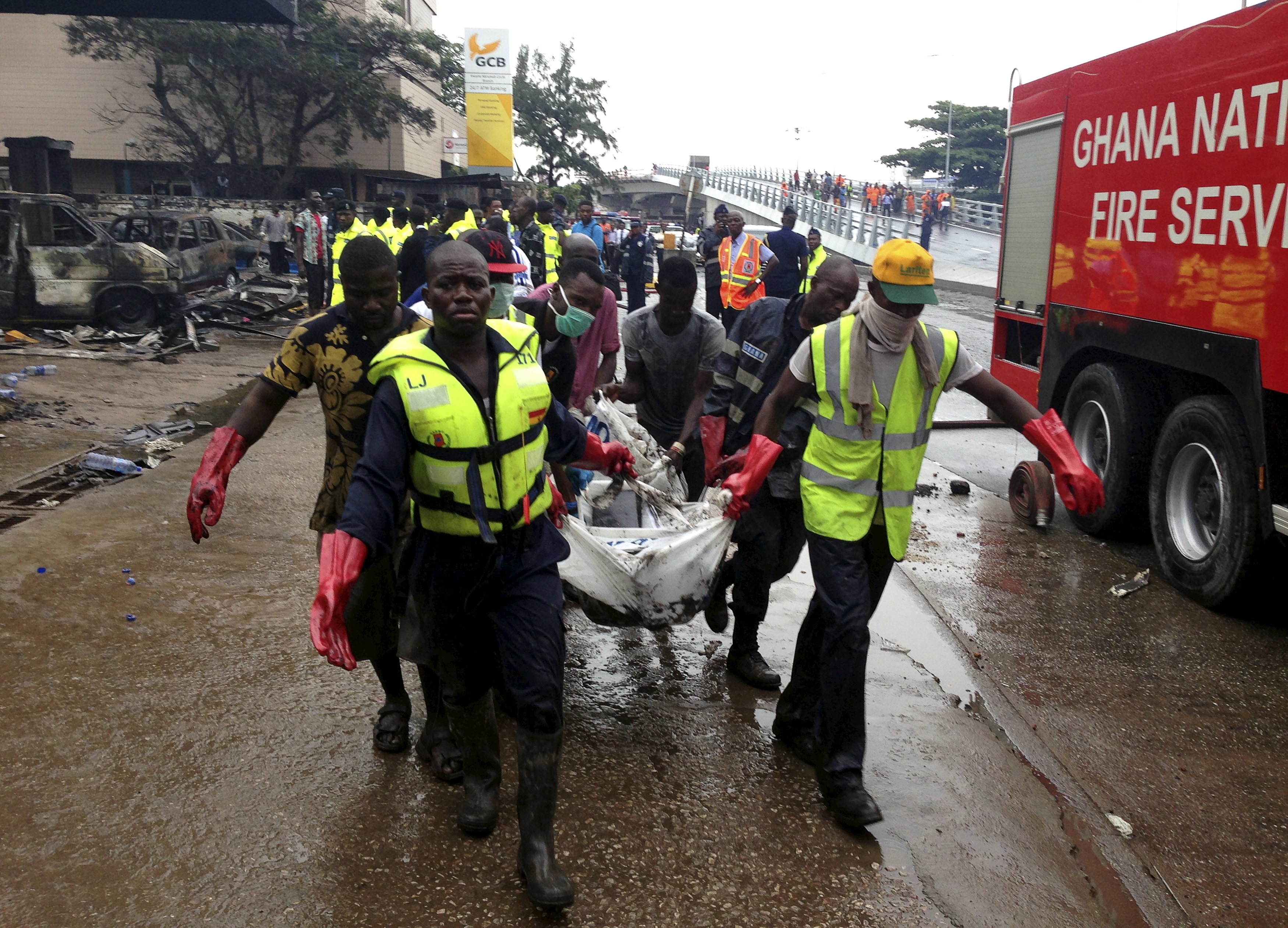 Rescue workers carry a corpse from the remains of a petrol station that exploded overnight killing around 90 people in Accra, Ghana.

ACCRA - An explosion at a petrol station in Ghana&39;s capital killed around 90 people sheltering from a storm early on Thursday, emergency services said, in the worst disaster to strike the West African state in more than a decade.

The force of the blast gave few a chance to escape. People were burned beyond recognition where they stood under the station&39;s awning, or trapped in the charred wreckage of cars and minivans parked on its forecourt.

The accident was caused by a fire at a nearby lorry terminal. Flames spread to the state-run GOIL petrol station via spilt fuel floating on flood water, fire brigade spokesman Prince Billy Anaglate said.

"It was an explosive fire and so the people sheltering at the filling station did not have an opportunity to escape," Anaglate said.

It was Ghana&39;s worst disaster since more than 120 people died in May 2001 in a stampede at the national stadium during a football match, a police spokesman said.

The incident exposed Accra&39;s vulnerability to storms, given poor drainage and weak infrastructure that has failed to keep pace with population growth after years of rapid economic expansion.

Low-wage workers struggling to get home through the storm, with roads closed and minivan buses not running, formed the bulk of those caught in the explosion, witnesses said.

Several other people were swept away by the seasonal storm in the coastal city and thousands more were made homeless as flood waters rose, officials said.

Ghana is one of Africa&39;s most stable democracies and for years its exports of gold, cocoa and oil made it one of the continent&39;s fastest-growing economies.

But since 2013 it has wrestled with a fiscal crisis and lower commodity prices, and growth this year is projected to fall to below the average for sub-Saharan Africa.

Rescue workers wearing face masks retrieved the remaining bodies, including that of a small child, and piled them onto a truck. Some cars were still smouldering.

President John Mahama said he was heartbroken by the loss of life. He blamed the floods partly on people building homes and businesses on waterways, blocking the city&39;s drainage systems.

"This loss of life is catastrophic and almost unprecedented," Mahama said as he visited the scene. "We must sit down and strategise to make sure this doesn&39;t happen again."

Opposition leader Nana Akufo Addo, who also went to the site, described the disaster as a "dark day in the history of the city".

Some officials said many new Accra gas stations had sprung up without proper permits, but noted that the destroyed GOIL station had been there for years.

May the Souls of the departed Rest in Perfect Peace. Words alone can&39;t express how heartbroken we are. AccraFloods pic.twitter.com/zaYFDJPNXD