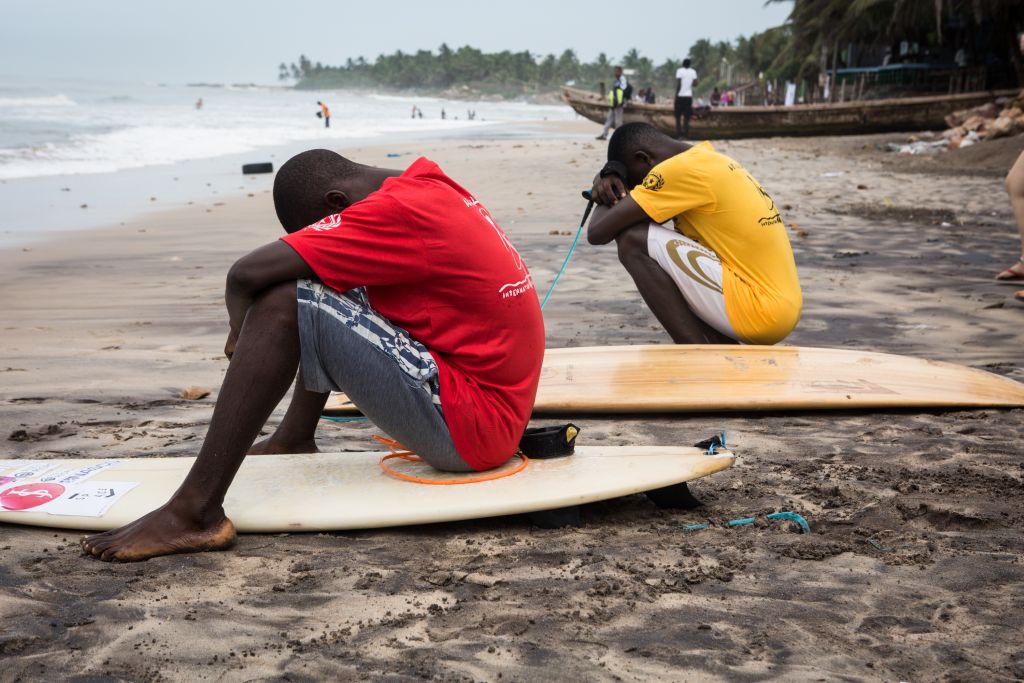 Surfers concentrate on their board before competing in the international surf day competition in Kokrobite Beach, Ghana on June 18, 2017.

KOKROBITE, Ghana - Brett Davies paced up and down the sloping sands of Kokrobite beach in Ghana, organising surfers from 20 different countries at his annual international competition.

Along the beach, some 30 kilometres (20 miles) west of Accra, dotted with dug-out fishing boats, Rastafarians were selling T-shirts and small children were playing in the sand.

Davies, 42, is leading the push to bring surfers to the West African nation as a way to help boost the country's under-developed tourism sector.

The British national already runs a surf school at Kokrobite and has helped to bring surfing to Busua, near the border with Ivory Coast.

"The greatest thing about surfing in Ghana is that we have uncrowded world-class waves that appeal to the beginner and intermediate market," he told AFP.

"Most well-known destinations are very localised and very intimidating to the average surfer."

At the competition, which was held last month, local reggae boomed from the speakers stacked in the corner of a car-park.

In the water, Emmanuel Ansah cut across the breaks, deftly manoeuvring his board, trying to catch the eye of the judges sitting on a wooden platform, looking out to sea.

The 19-year-old from Busua started surfing five years ago and described his first time on the waves as "like having a new girlfriend".

"I was so happy," he said. Now he, too, wants to see Ghana become a surfing destination in its own right -- and one day represent the West African nation at overseas competitions.

According to the World Bank, 897,000 international tourists visited Ghana in 2015. In comparison, just over 1.1 million went to Kenya and 8.9 million travelled to South Africa.

But the World Travel and Tourism Council (WTTC) estimates numbers for Ghana could jump to nearly 1.3 million this year and more than 2.0 million by 2027.

In the last few years travel and tourism have directly contributed $1.3 billion to Ghana's economy -- the equivalent of about 3.0 percent of gross domestic product.

But with some 550 kilometres of unspoiled coastline, watersports on the Atlantic Ocean, off the palm tree-lined golden sands, are being seen as a major draw.

"Surfing has a huge potential," said Ghana tourism specialist Gilbert Abeiku Aggrey. "We have not developed our beaches.

"We have not done anything, it's a raw opportunity for anyone who wants to come."

Attracting surfers is seen as a good way to bring in middle-income earners to Ghana, plugging a growing gap between budget travellers, volunteers and those on business.

"The gap between the low end and the high end is very huge, it's an untapped market," said Aggrey.

"It is because people aim at making profit so they hike the price or rate looking for the high-end travellers."

The high cost of flights and accommodation in Ghana has been blamed for deterring tourists.

A stay at a standard three-star hotel in the capital can set travellers back $100 (88 euros) a night, while flights even within West Africa can be eye-wateringly expensive.

The head of the Ghana Tourism Authority, Kwesi Agyemang, said there are plans to start targeting different interest groups and improve regulation.

The authority's work includes targeting other countries for visitors.

The government's National Tourism Development Plan in 2012 noted there were "completely virgin" beaches in Ghana's Western Region because of lack of access.

They showed "great potential for development", it added.

Ghana's new government, in power since January this year, has put a fresh emphasis on tourism and wants to develop Accra's under-developed and impoverished beach front.

Ghana, once celebrated for its rapidly growing economy, saw rates of growth slow to some 3.6 percent in 2016 -- the lowest in two decades and well down on 14 percent in 2011.

Davies accepted that government help was needed but, whatever happens, he will be encouraging people to ride the waves.

"Ghana is just about to explode due to surfing tourism and it's very exciting times for surfing in Ghana," he added.