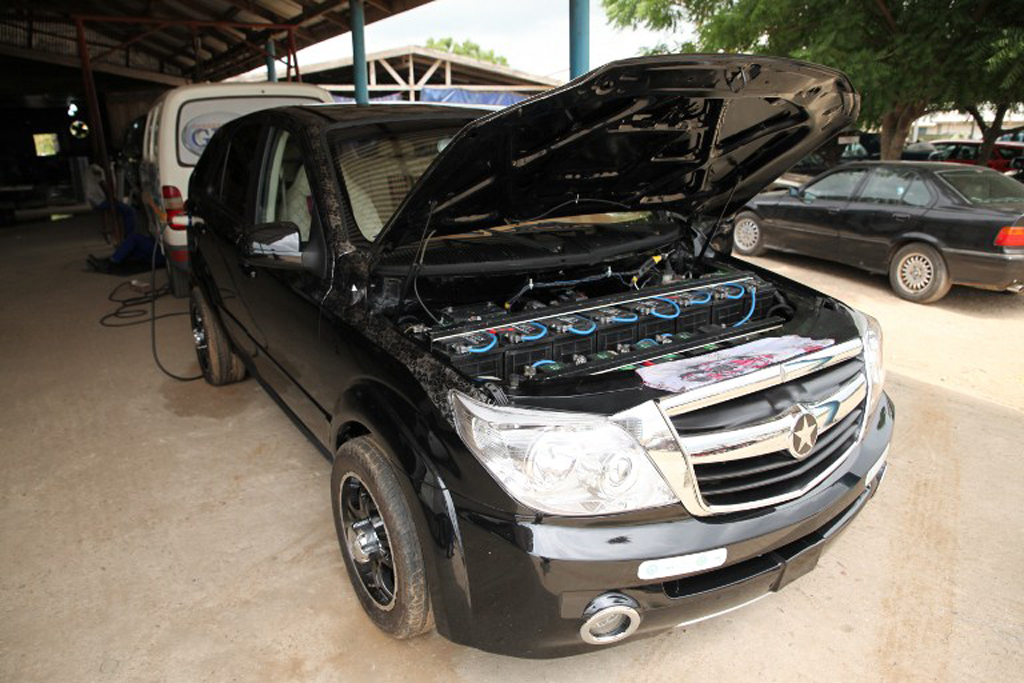 This file photo taken on February 12, 2014 shows a Kantanka car at the Apostle Safo Technology Research Centre in Gomoa Mpota.

ACCRA - Japanese Toyotas, German Mercedes and BMWs,  GM cars and trucks from the USA are driven in countries around the world. But in Ghana an inventor and church leader who started out trying to make voice-controlled television sets is telling the auto giants to move over.

Kwadwo Safo Kantanka -- nicknamed the "Apostle" because he also runs a network of churches -- has finally realised his dream of developing and marketing cars "Made in Ghana".

Kantanka&39;s range of sports utility vehicles and pick-up trucks have got Ghana talking on social media, thanks in part to an advertising campaign using local movie and music stars.

The locally made vehicles are entering a tough market, going up against established brands in a country that sees about 12,000 new and 100,000 second-hand cars imported every year.

But the inventor&39;s son, who is chief executive of the Kantanka Group, is confident the demand is there and the firm can hold its own in the competition.

"Already we have certain companies in Ghana who have come to make certain outrageous orders for huge numbers that we have to meet. So, we are working," he said, without giving any specifics.

Ghana&39;s President John Dramani Mahama has been pushing his compatriots to buy locally to boost a stuttering economy hit by inflation, a depreciating currency and high public sector debt.

In 2014, he showed off a pair of Ghana-made shoes during his annual State of the Nation address and criticised the lack of appreciation of locally made goods and over-reliance on imports.

He noted that some $1.5 billion was spent in foreign currency on items such as rice, sugar, cooking oil, tomatoes and fish -- all money "which could have gone into the pockets of Ghanaian entrepreneurs",  he said.

"Any import items we buy as Ghanaians constitutes an export of jobs in this country, especially in respect of the items for which we have comparative advantage to produce," he said at the time.

For Kantanka some key components such as glass, tyres and brake calipers are imported, AFP was told on a visit to the company&39;s technology research centre west of Accra last year.

Wood from Ghanaian forests is used to make dashboards while the cream-coloured leather seats in the black SUV were made in the country&39;s second biggest commercial city, Kumasi.

Akan -- a language widely used in Ghana -- is written alongside English on the electronics.
Kantanka&39;s son was adamant about the uniqueness of the cars, which have all been approved for safety by Ghana&39;s Drivers Vehicle Licensing Authority.

The Made in Ghana label means that "if you have any problems with the vehicle, you wouldn&39;t have to import from India or China or America. All the parts are right here and we have a 24-hour service," he said.

Six months ago, Ghana&39;s police service received one of the pick-up trucks, potentially paving the way for other government agencies to place orders.

Kantanka junior is upbeat about the way ahead.

"The future of Kantanka for the next 10 years is to try as much as possible to increase our lines," he said.

To the curent three lines, he said, "we intend to increase by next year January, February and add two more lines to it. We intend to go into more lines like buses, mini-vans and all that."

For Ghanaians, the cars could put their West African nation on the map.

"We must believe in the Ghanaian just like Toyotas and Hyundais," said Murtala Mohammed, who lives in Accra.

"They all started from scratch. Who knows? Kantaka could be the next Toyota."