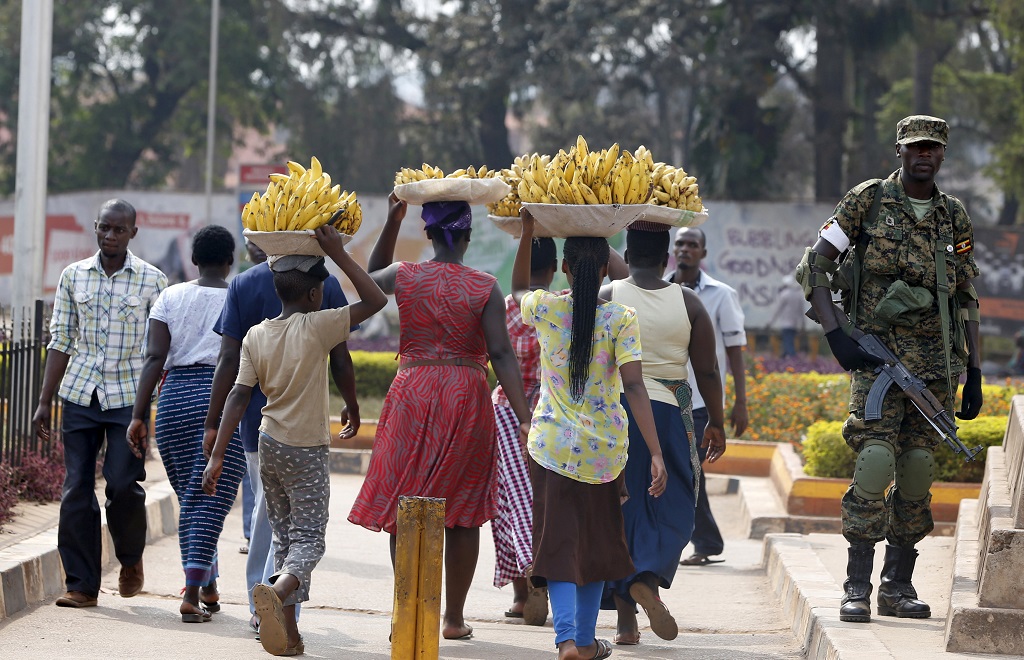 Women carry baskets of banana as they walk past a military personnel patrolling in Kampala, Uganda 19 February 2016.

Widespread media coverage of the appearance of 20 corpses beside roadsides south of the capital since May reflects public anger with police for repeatedly saying they have arrested the perpetrators, only for another body to be discovered.

"It's terrifying," Susan Kabul, 29, told Reuters, standing near the garbage-littered bank of a drainage channel where the latest murder victim was discovered. "The police need to tell us who is slaughtering people like this."

The government has defended the police, and police say they have arrested 30 suspects and charged 13 of them, listing possible motives ranging from domestic rows through sexual abuse to ritual murder linked to human sacrifice.

"Ritual killing is one of the motives that we suspect, we also think there might be cases of jilted lovers," police spokesman Asan Kasingye said by telephone. "Other theories might come up as investigations progress."

There have been occasional individual cases of alleged ritual murder in the east African nation, but this is the first time there has been such a large number of people killed in similar circumstances in the same area.

In a nod to the public outrage, lawmakers stopped work for two days this week after the 20th body was found, saying ministers had failed to appear before the legislature over the killings in three districts on the outer edge of Kampala.

READ: The danger of supplementing aid to Africa with weapons

Government spokesman Ofwono Opondo accused them of populism. "They spoke as if the government is doing nothing," he said. "They should leave the police to work without pressure."

The legislature is dominated by supporters of longstanding President Yoweri Museveni, who has been in power since 1986.

The constitution was changed in 2005 to remove a two-term limit, allowing him to extend his rule, and parliament is discussing removing an age cap. His son is a major general and powerful presidential adviser.

Opposition leader Kizza Besigye, who contends that Museveni stole his victory in last year's election, has been charged with treason. Police often break up opposition rallies with tear gas, beatings or detentions.

The opposition and rights activists have long accused security forces of neglecting crime to focus on political control.

"Police can't secure women in a small area - all the attention is on politics, on who is criticizing Museveni," said Sarah Birete of the Centre for Constitutional Governance.

"Some people start disguised as political activists and degenerate to criminals, I think they are unhappy that the police is on their back," he said. "The police is right to focus on all forms of crime that can cause insecurity."

Uganda is ranked among the world's most corrupt countries by watchdog Transparency International. The Ugandan government's inspector general said in a 2014 report that the police force was "the most corrupt public institution in the country" and noted crimes were rarely investigated.

In Wakiso, the district south of Kampala where most of the victims have been found, few residents have faith that the killings will stop.

"I have stopped moving about at night. He could be a serial killer. I don't know where he will strike next," said Deo Busulwa, who lives a stone's throw from the canal side bank location of the latest grisly discovery, of mother-of-two Maria Nabilawa.

Many residents suspect the victims are killed elsewhere and the bodies dumped. Kasingye said they had arrested Nabilawa's husband in connection with her killing.