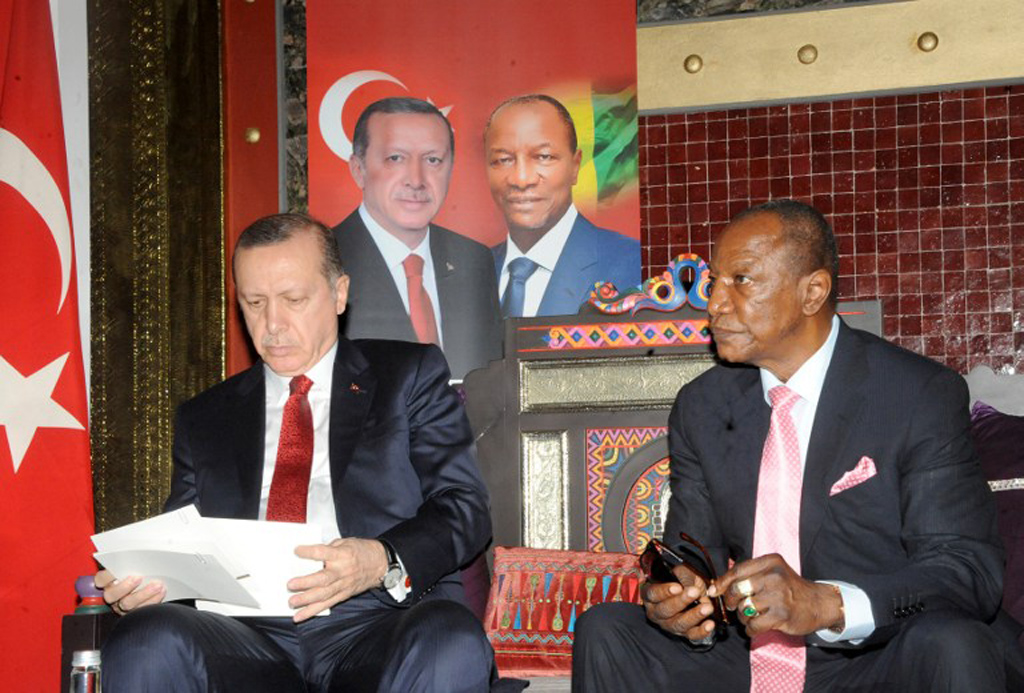 Guinea's president Alpha Conde of Guinea (R) sits next to Turkish president Recep Tayyip Erdogan on 3 March, 2016 at the Conakry airport upon his arrival in Guinea, the final leg of Turkish president's five-day west Africa tour.

CONAKRY - Guinea and Turkey signed Thursday multiple deals in areas including defence, health and energy during a visit by Turkish President Recep Tayyip Erdogan to the west African nation.

Erdogan arrived in the Guinean capital Conakry on Thursday, accompanied by some 230 businessmen, as part of a regional tour that included stops in Ivory Coast, Ghana and Nigeria.

The new deals could increase annual trade between the two countries from 69 million dollars to 500 million dollars (63 to 456 million euros), Erdogan told the delegation in Turkish, without specifying a time period for the growth.

Signed agreements that will strengthen cooperation w/ our brother Guinea, as described by President @RT_Erdogan pic.twitter.com/TKW58WWHSl

The two countries signed "conventions and cooperation agreements in the domains of national defence, tourism, mining, energy, health and environment," a Guinean government spokesman said, describing the deals as a "win-win" without giving further details.

Guinean President Alpha Conde described his Turkish counterpart&39;s visit as "just as important for the Turks as it is for us".

"(We) need a healthy and sustainable economic recovery" following the Ebola epidemic that hit west Africa in 2013, he said.

A video posted by www.SaharaReporters.TV (@saharareporters) on

One of the poorest nations in the world, the former French colony was the host for "patient zero" -- the infant who was Ebola&39;s first victim. A total of 2,500 died of the virus in the country.

Erdogan said Wednesday he was ready to help combat terrorism in Nigeria, where Boko Haram fighters have killed thousands of people in a bloody campaign for a hardline Islamic state.

He also signed a memorandum on trade and economic cooperation, which Nigerian President Muhammadu Buhari said was "just the beginning of what we have in the pipeline."

Speaking after talks with Buhari in Abuja, Erdogan commiserated with Nigerians fighting insurgents, saying he felt their pain.

"As a country combating terrorism for a long time now, every reprehensible terrorist attack that takes place here in Nigeria deeply hurts our heart," Erdogan said to reporters at the presidential villa.

"We are always ready to cooperate with Nigeria when it comes to combating terrorism."