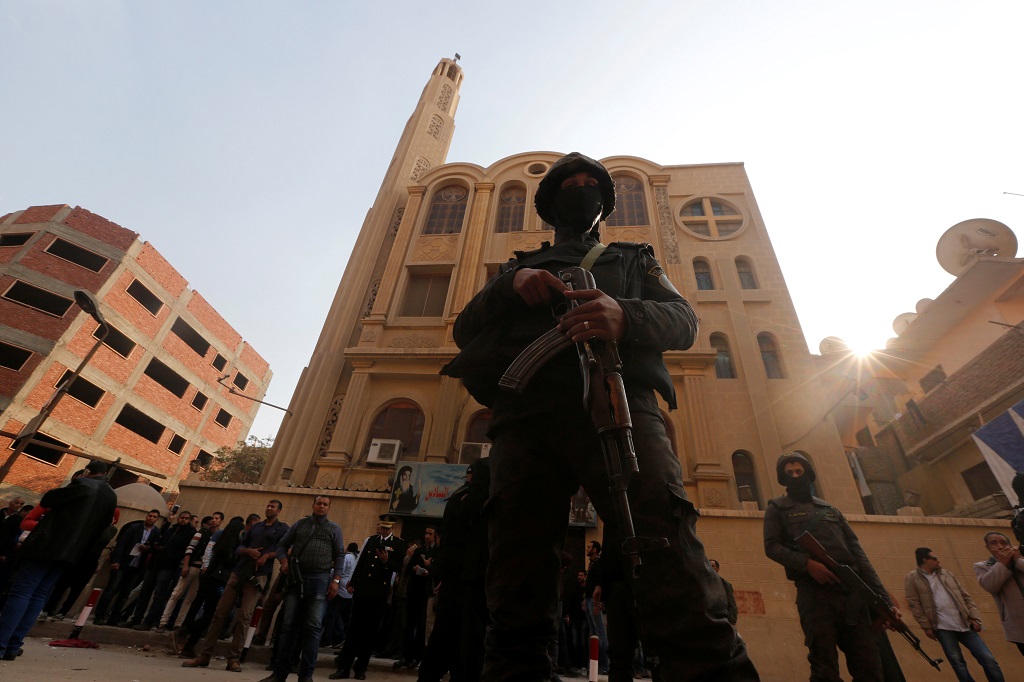 Egyptian policemen and firefighters lower the body of a soldier who was killed a day earlier in the restive Sinai Peninsula in an attack by the Islamic State group, during a funeral ceremony in the city of Al-Mansurah on July 8, 2017.

CAIRO - A gunman opened fire on worshippers and Egyptian security forces stationed outside a Coptic church in a Cairo suburb on Friday and killed at least seven people before he was wounded and arrested, the Interior Ministry said.

Earlier reports by security sources and state media said at least two attackers were involved, and that one was shot dead and another fled the scene. The Interior Ministry did not explain the reason for the different accounts.

It said the attacker had first fired at a shop 4 km (3 miles) away, killing two people, before proceeding to the Mar Mina church in the southern suburb of Helwan, where he opened fire and tried to throw an explosive device.

There was no immediate claim of responsibility for the attack. Islamist militants have claimed several attacks on Egypt&39;s large Christian minority in recent years, including two bombings on Palm Sunday in April and a blast at Cairo&39;s largest Coptic cathedral in December 2016 that killed 28 people.

Nine were killed in total, including one policeman at the church, the ministry said. Several security sources and local media earlier reported three policemen had been killed.

The ministry said forces had "immediately dealt with the (attacker) and arrested him after he was wounded." It added, "Legal measures have been taken," without elaborating.

The general prosecutor said in a statement that an investigation has been launched into the incident.

"The shooting began at 10:30 a.m. and carried on for more than 15 minutes ... there was more than one attacker," Mohammed Hussein Abdelhadi, who lives close to the church, told Reuters.

A witness who did not want to give his name said a policeman was killed while he was closing the church gate to stop the gunman getting in.

The church was being guarded by police in the run-up to Orthodox Christmas celebrations next week.

The Health Ministry said in an earlier statement that nine people had been killed on Friday in addition to the gunman, and five wounded, including two women in serious condition.

Police have stepped up security measures around churches ahead of Coptic Christmas celebrations on Jan. 7, deploying officers outside Christian places of worship and setting up metal detectors at some of the bigger churches.

President Abdel Fattah al-Sisi offered his condolences to the families and ordered security forces to increase safety measures at sensitive sites, his office said in a statement.