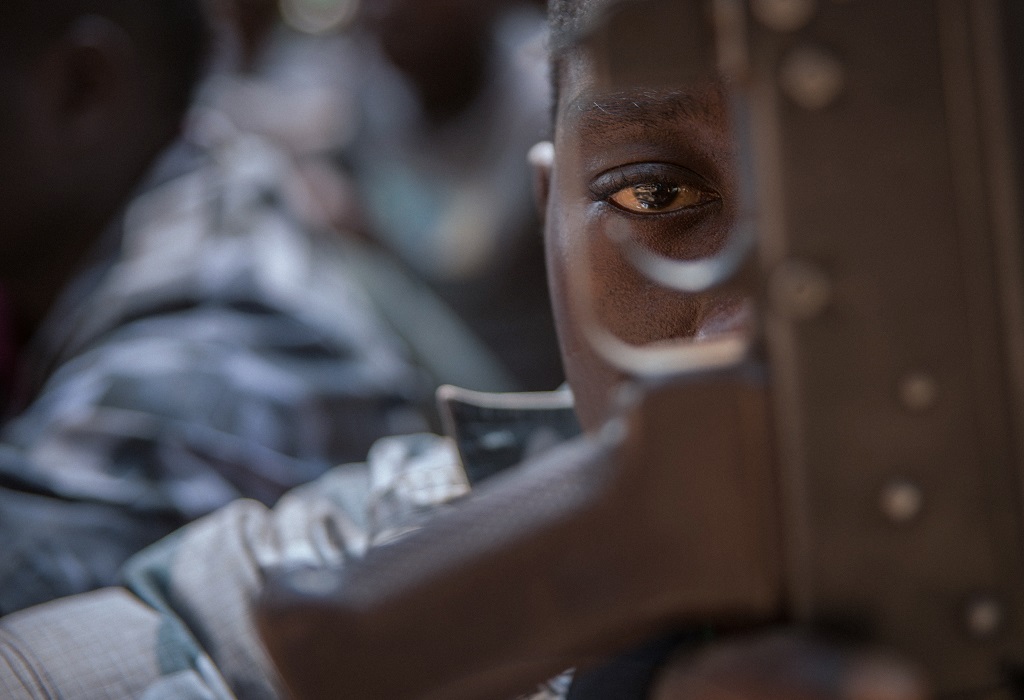 A newly released child soldier looks through a rifle trigger guard during a release ceremony for child soldiers in Yambio, South Sudan, on February 7, 2018.

JOHANNESBURG – The United Nations has called on all stakeholders in South Sudan to help recently released child soldiers to integrate back into their communities and build a future for themselves.

David Shearer, the Special Representative of the UN Secretary-General, made the appeal following the release of 300 child soldiers, including 87 girls, who were released by armed groups in South Sudan on Wednesday.

“Children should not be carrying guns and killing each other. They should be playing, learning, having fun with friends, protected and cherished by the adults around them,” said Shearer as he welcomed their release.

Undertaken in Yambio (south-western South Sudan), it is the first such release in over a year and marks the first phase of the overall programme which will see more than 700 children return back to their communities.

“They will have endured suffering, including sexual abuse. It is vital that they receive the support they need to re-join their communities and that they are welcomed home by family and friends without any sense of stigma,” added Shearer.

At a formal ceremony, the children were disarmed and were provided with civilian clothes as well as medical screenings.

In the days to come, agencies, such as the UN Children’s Fund (Unicef) and local partners will provide them with counselling and psychosocial support as part of the reintegration programme.

According to Unifec, the children with relatives in area will be reunited with their families, while others will be placed in interim care centres until their families can be traced.

They will also be provided with three months’ worth of food assistance and with vocational training and age-specific education services in schools and accelerated learning centres to help them reach their full potential.

“Not all children are forcibly recruited. Many joined armed groups because they feel they had no other option,” said Mahimbo Mdoe, the head of Unicef programmes in South Sudan.

“Our priority for this group – and for children across South Sudan – is to provide the support they need so they are able to see a more promising future.”

Together with Unicef, the UN Mission in South Sudan (UNMISS) and other UN agencies have been working to bring the release to light.

Given the volatile security situation, the UN Mission deployed peacekeeping troops to escort religious leaders into remote bush areas to make contact and negotiate with the armed groups.

It also sent engineers to repair a road between Yambio and a vocational training centre nearby to make sure that the young people can travel safely for training programmes.

However, in spite of this release, some 19,000 children continue to be used by armed forces and groups more than four years after conflict erupted in December 2013.

Release efforts have also been also complicated by fighting as the one witnessed in the region in July 2016 that stalled the momentum.