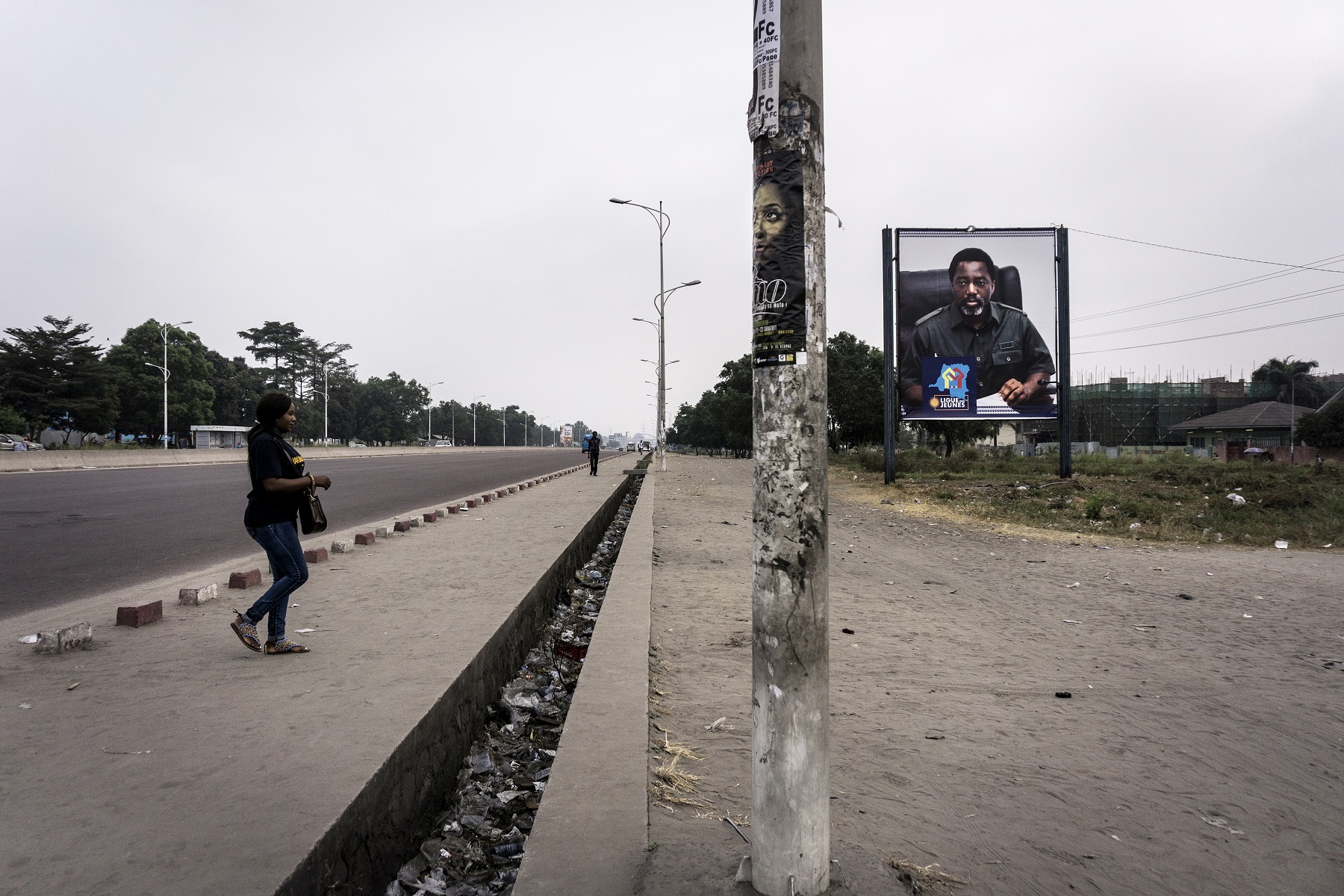 A Congolese women crosses an empty boulevard in Kinshasa with a placard of President of the Democratic Republic of Congo Joseph Kabila as the opposition leaders called for two days of general strikes on July 8, 2017 in Kinshasa.

KINSHASA - With one year until long-delayed elections in the Democratic Republic of Congo, the countdown officially begins Saturday for a vote which is supposed to bring about the belated departure of President Joseph Kabila.

But it remains unclear if the 45 million Congolese voters who registered in 2017 will finally get to choose a new president, deputies and elected representatives in "one single step" on December 23, 2018.

Will Kabala, in office since 2001, cede power in early 2019 to his elected successor, after extending by two years his second and final constitutional term - which should have ended on December 20, 2016?

Stakes are high for this vast country which has never had a peaceful transition of power since independence from Belgium in 1960, and which has enviable mineral wealth of copper, cobalt, coltan, gold and diamonds.

Elections were supposed to take place by December 2017, according to an agreement signed on New Year&39;s Eve 2016, but they were repeatedly postponed - due to violence in the restive Kasai region of the DR Congo.

The violence in Kasai erupted in September 2016 when a tribal chieftain known as the Kamwina Nsapu, who rebelled against Kabila&39;s regime, was killed.

More than 3,000 people have died in the region since then.

The International Federation for Human Rights (FIDH) this past week accused the authorities of committing "crimes against humanity perpetrated to create chaos".

DR Congo is one of the UN&39;s global humanitarian priorities for 2018, with four million internally displaced people and hundreds of thousands of children at risk in Kasai, according to warnings from aid agencies.

More specifically, the United Nations Mission in Congo (MONUSCO) continues to record hundreds of murders and rapes by militia or security forces - 701 rights violations were recorded in November alone, after 704 in October, 644 in September and 441 in August.

The publication of an electoral calendar on November 5 did not ease the political situation.

The Congolese Catholic Church, which mediated the 2016 New Year&39;s agreement, asked Kabila to publicly declare that he would not be a candidate for his own succession - a request that remains unanswered.

The authorities have been banning and dispersing any opposition demonstrations that call for Kabila&39;s departure by the end of the year.

"They (the opponents) want the power without election," a security source said.

Strictly speaking, the authorities are already late on the timetable presented by the electoral commission on November 5: Kabila has yet to enact the electoral deal, which was adopted by parliament on December 15.

Assuming this happens, negotiations can then begin between Kinshasa and its international "partners" on the financing of the elections.

The European Union, for example, has offered its assistance on the condition that freedoms and the right to protest are restored.

These are "obsolete ultimatums", according to government spokesman Lambert Mende, who on Thursday confirmed that the government had designated $500 million (R6-billion) - 10 percent of the 2018 budget - for the elections, including the purchase of controversial "voting machines".

READ: US says DRC must hold long-delayed election by end of 2018

"The election will take place, even without support," a presidential ally told AFP, adding ironically: "When they organise the elections in Ireland, what does the Ivory Coast give?"

On the one hand, there are diplomatic courtesies: Brussels, Paris and Washington are demanding that the electoral timetable be adhered to, while promising to respect fundamental freedoms.

Senior UN official Jean-Pierre Lacroix also reaffirmed the availability of the organisation "to work in support of this (electoral) process", after meeting the president on Sunday.

On the other, there are pressures and sanctions: the EU has just extended am asset freeze and travel ban on 16 Congolese figures, including the spokesman of the government, the interior minister and the intelligence chief.

The US also announced Thursday sanctions against an Israeli businessman, Dan Gertler, a Kabila ally, who is accused of causing the state to lose $1,3-billion in the sale of Congolese mining assets.