I was fired for anti-corruption call: Joice Mujuru 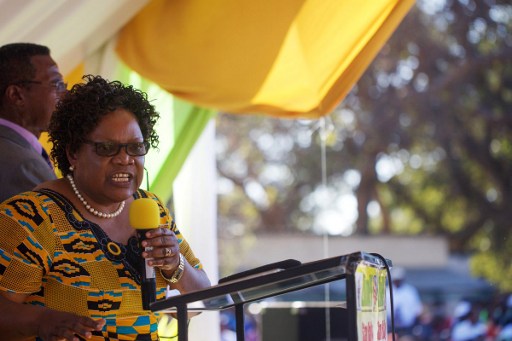 HARARE – Former Zimbabwean vice president and leader of the newly formed Zimbabwe People First (ZPF) Joice Mujuru on Saturday revealed that the real reason for her being sacked from Zanu-PF was because she had spoken out against corruption in the governing party, which saw bigwigs amassing lots of wealth at the expense of ordinary people.

Addressing thousands of her party supporters in Harare, Mujuru said allegations of attempting to topple President Robert Mugabe made against her by first lady Grace Mugabe were all lies.

“Everything said about me was a lie. Those who were used to create the lies have come out in the open and revealed how they had been abused. No lie can live forever. I am saying this even on behalf of my colleagues with whom we were fired together.”

Mujuru said if the allegations that she and others were planning to kill the president were true they should have been in prison for treason by now, adding that their position was to see the people’s views pronounced in the party, a position which other party leaders did not like.

“Up to now, we wake up each day and look at each other, with Rugare Gumbo, Dydimus Mutasa, and Dzikamai Mavhaire, and ask ourselves why we have not been arrested for attempted murder and treason. We have not been intercepted despite the numerous roadblocks that we encounter on our roads every day.”

She said they had decided to remain silent and not respond to the allegations “because no docket can be opened for remaining silent”.

“We want to come out in the open today [Saturday] and thank you for your support and prayers. They were trying times which were very traumatising but your support was truly amazing and it gave us comfort. Our position was always to put people first. If people fought to liberate people, they must be free. That must be done and our colleagues were not willing, hence the expulsion,” Mujuru said.

It was not painful to be fired from the party for defending the people and advocating for what they wanted and deserved. It was a shame that political leaders expended their energies on teaching the youth to disrespect their elders, including those who had fought in the country’s liberation struggle, instead of coming up with policies to rebuild the country’s battered economy.

She was saddened by the way war veterans were being treated by Zanu-PF. It was one of the reasons she had crossed paths with some in the governing party who only thought about themselves, forgetting the welfare of others.

“The war veterans suffered a lot during the war and they were not so lucky as some of us who ended up in government and led comfortable lives. Yet they are the people who are now being attacked with water cannon and being beaten by the youths,” she said.

The people should be put first and always be given the opportunity to air their grievances freely without being intimidated.

“What a kind of a country cannot dialogue? We are pained to see war veterans being denied access to dialogue in a country they fought for."

ZPF was not an extension of Zanu-PF but a totally new creation formed by like-minded people from different political persuasions.

“It’s not an extension of Zanu-PF, no. Please get it from me, I am not going back to Zanu-PF. This party has attracted people from a broad political spectrum including those who were apolitical.”

Mujuru said ZPF was ready to work with everyone who respected the country’s values and the principles of inclusivity and tolerance.

Mujuru, Gumbo, Mutasa, Mavhaire and dozens of others were unceremoniously booted out of Zanu-PF in 2014 on allegations of plotting to oust and assassinate Mugabe.

Before that, Grace Mugabe had launched a scathing attack on the then vice president, accusing her of visiting traditional doctors in her bid to take over from Robert Mugabe.