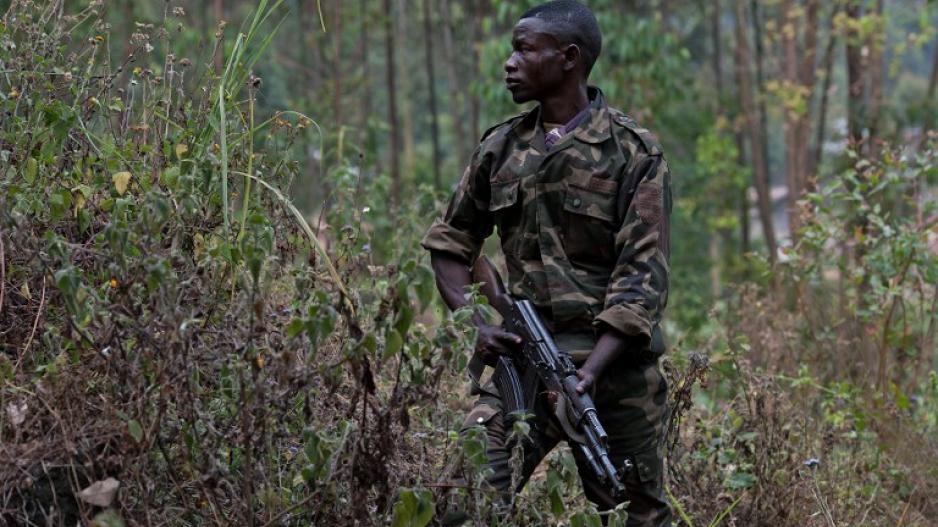 A Congolese army soldier holds a position ahead of an assault in the bush north Goma, in the east of the Democratic Republic of the Congo. The illicit mineral trade is fueling armed conflict in the region.

The smuggling of minerals from the eastern Democratic Republic of the Congo into neighbouring states is costing the central African nation millions of dollars in lost revenue every year.
20 million people depend on the illegal mining of minerals as their only sources of livelihood. Local government officials are benefitting themselves from the illicit trade.
The smuggling of gold, diamonds and tantalum is fuelling wars in the region. With arms being purchased with the money made from the trade.
The eastern DRC is ideally positioned along the smuggling route.
80 percent of the country’s minerals are smuggled over porous borders and through the forests and swamps into Uganda, Kenya, Rwanda, Burundi and Tanzania which are important regional hubs for international gold markets.
In the face of mounting international criticism of this trade, President Joseph Kabila ordered a ban on exports in September 2010.
However, this was lifted 6 months later, after right groups accused Kabila’s military chief of staff, Bosco Ntaganda, of flouting the ban.
He was just one of the many commanders who were reluctant to give up such lucrative sources of income.
“Those minerals can cross the border. They are labeled and their owners hold documents authorizing the export. But they come during day time. When guys come at night they usually have no export document, said Major Emmanuel Chiyenya of the police’s Criminal Investigation Unit.”
However there are attempts to stem the flow.
Former South African president Thabo Mbeki’s Panel on Illicit Financial Flows has been investigating the extent of the problem and the impact it’s having on economies and people living in the region.
There are also attempts to find ways of repatriating the stolen funds.
One country in particular that is clamping down on this trade is Tanzania.
It has implemented tighter control and stricter laws; after it emerged the nation was losing more than $15 million a year.
The Organisation for Economic Co-operation and Development has set up specific guidelines for companies extracting or buying minerals from conflict zones.
It says the only way to achieve peace and prosperity is to break the link between conflict and minerals.
However experts believe the programme is only one of the steps being taken, and for the illicit trade to be completely stamped out, countries need to take a more active role in combating smuggling.