In rural Zimbabwe, a peaceful election seems to be on the cards 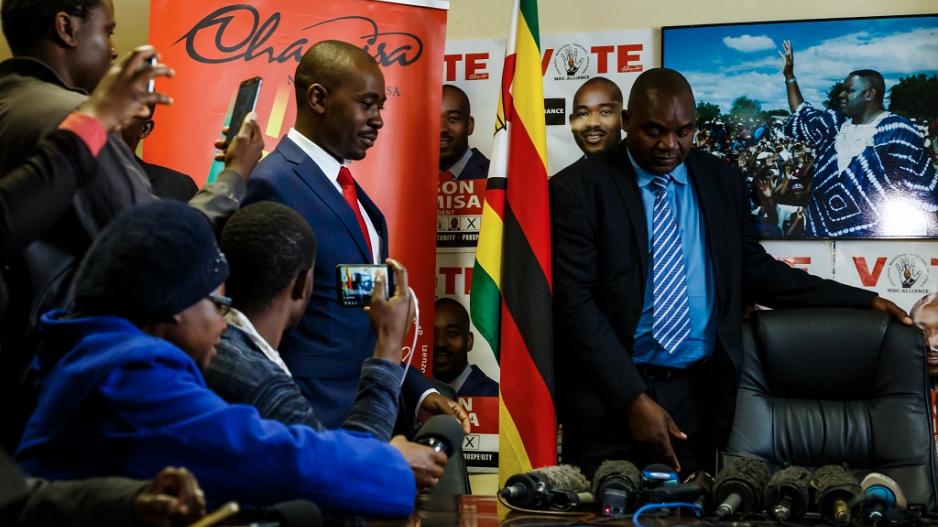 Zimbabwe's Movement for Democratic Change (MDC) party leader Nelson Chamisa (2ndR) arrives to hold a press conference at the MDC headquarters in Harare, on July 17, 2018, over the security of the ballot paper and credibility of the voters roll ahead.

NYAHUKWE, Zimbabwe - From a ruling party rally in the east to opposition door-to-door canvassing in the northwest, Zimbabweans have been experiencing the novelty of a relatively free and peaceful election campaign.

Sitting on a wind-swept rocky slope in Nyahukwe, villagers listened to politicians from President Mnangagwa&39;s ZANU-PF party in an atmosphere they said was noticeably more relaxed than under former ruler Robert Mugabe.

"This one stands out as the most peaceful campaign. No one is being beaten," Patrick Makonde, 59, who has voted in every election since independence from Britain in 1980, told AFP.

Makonde says he has seen real differences to previous elections.

"We are free to campaign for whosoever we like," he said. "The youngsters are supporting their own parties, while we stick to our own party."

Some 200 kilometres northwest, activists for the opposition Movement for Democratic Change (MDC) campaigned door-to-door in the village of Domboshawa outside Harare, wearing their distinctive red colours as they distributed pamphlets.

"This year is good, people are free to speak their mind, to exercise their rights, something which was previously impossible," said Rabina Madziva, an unemployed mother of one, after meeting the MDC team.

"Under Mugabe, politicians ruled with an iron fist -- whatever they said, you should do."

Elections since the creation in 1999 of the MDC -- the most credible opposition party -- have been marred by violence, with rural voters bearing the brunt of violence, coercion and intimidation.

In 2008, then opposition leader Morgan Tsvangirai pulled out of the presidential run-off after attacks orchestrated by the state and ZANU-PF claimed at least 200 of his supporters.

The run-up to this year&39;s election on July 30 has not been violence-free -- a blast narrowly missed Mnangagwa at an election rally, killing two people.

And "We The People", a group of 7,000 citizens monitoring incidents, said it had recorded 105 reports of threats of violence and 19 cases of actual violence during the week July 9 to 15.

Perpetrators have threatened "extreme violence should ZANU-PF lose, or should the presidential election proceed to a run-off," said the group.

"Acts of violence included people being beaten, acts of arson, and attempted assaults," according to the group.

Police earlier this month said they had received fewer reports of election-related violence than in previous campaigns.

And an Afrobarometer poll of 2,400 people countrywide found "a somewhat more open political atmosphere" with the opposition allowed to campaign more freely.

Mnangagwa, a ZANU-PF loyalist who took over from the ousted Mugabe in November, has vowed a free and fair vote and invited in international poll observers -- including previously-banned European Union and Commonwealth teams.

But Human Rights Watch&39;s Southern Africa director, Dewa Mavhinga, warned intimidation was occurring in some rural areas, and that violence could increase if the vote looks close or is disputed due to alleged fraud.

"Mnangagwa wants legitimacy from this election and this is why he is preaching peace... but those at the bottom in ZANU-PF are uncertain and jittery," said Mavhinga.

"The default factory setting for ZANU-PF is violence," he said, adding when it occurs it would be "sudden and swift because the machinery of violence remains intact. It&39;s just not being used."

For now, rural voters hope the election will bring stability and economic revival after years of decline.

"I was born and raised up in a country in crisis. We hear from our parents that back then, life was good, that there was real money, money with value," said Joseph Mvere, 22, who says he will vote for the first time this year.

"I was still very young in 2008, but that election was terrible," added newly married Mvere, as he headed home from buying pea seedlings for his vegetable garden.

"The situation has changed. Now we are campaigning more like civilised people."