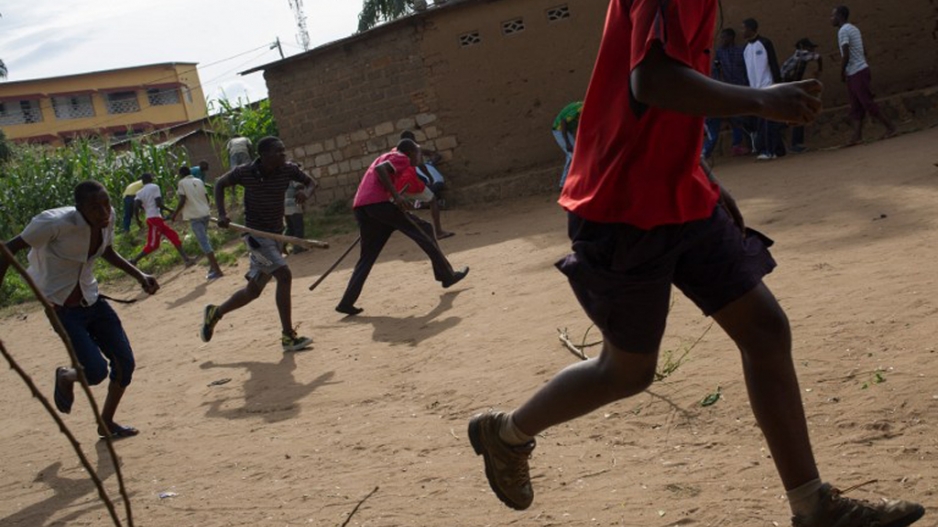 Protestors flee gunfire from police during clashes in the Cibitoke neighbourhood of Bujumbura, on May 7, 2015. At least one person was killed and several more wounded in Burundi on May 7. AFP PHOTO / PHIL MOORE

NAIROBI, Kenya - Two secondary school students and a passer-by were hurt by gunfire Friday as hundreds of youngsters turned out to protest the arrest of pupils accused of defacing the president&39;s photo, witnesses said.

The trouble broke out after the arrest of eight 9th-year students aged between 15 and 17 for vandalising a picture of President Pierre Nkurunziza in their human sciences textbook, a teacher told AFP.

The teacher, who spoke on condition of anonymity, said the arrests took place in the morning at the Muramvya school in central Burundi where 1,400 students are enrolled.

Witnesses said that hundreds of students immediately took to the streets in the city centre to demand the release of their friends.

"Secret service police opened fire to disperse the protesters, badly wounding two students and a man on a motorbike who was passing by," said a witness.

Police then arrested 11 more students in two other schools also for scribbling over Nkurunziza&39;s picture in schoolbooks, witnesses said.

A week ago 300 8th-grade students from a school in Ruziba, south of the capital Bujumbura, were sent home after staff found they had defaced a picture of the president.

A parent said the administration had told the students, aged between 14 and 16, that they could not come back to class until they turned in those responsible.

In some of the textbooks, the eyes had been gouged out, while insults against him were scrawled over others.

The central African country has been plunged into a deep crisis since Nkurunziza announced in April 2015 that he was running for a third term, a vote he won last July amid opposition boycotts.

Violence has left more than 500 people dead and forced more than 270,000 Burundians to flee the country, according to the UN.