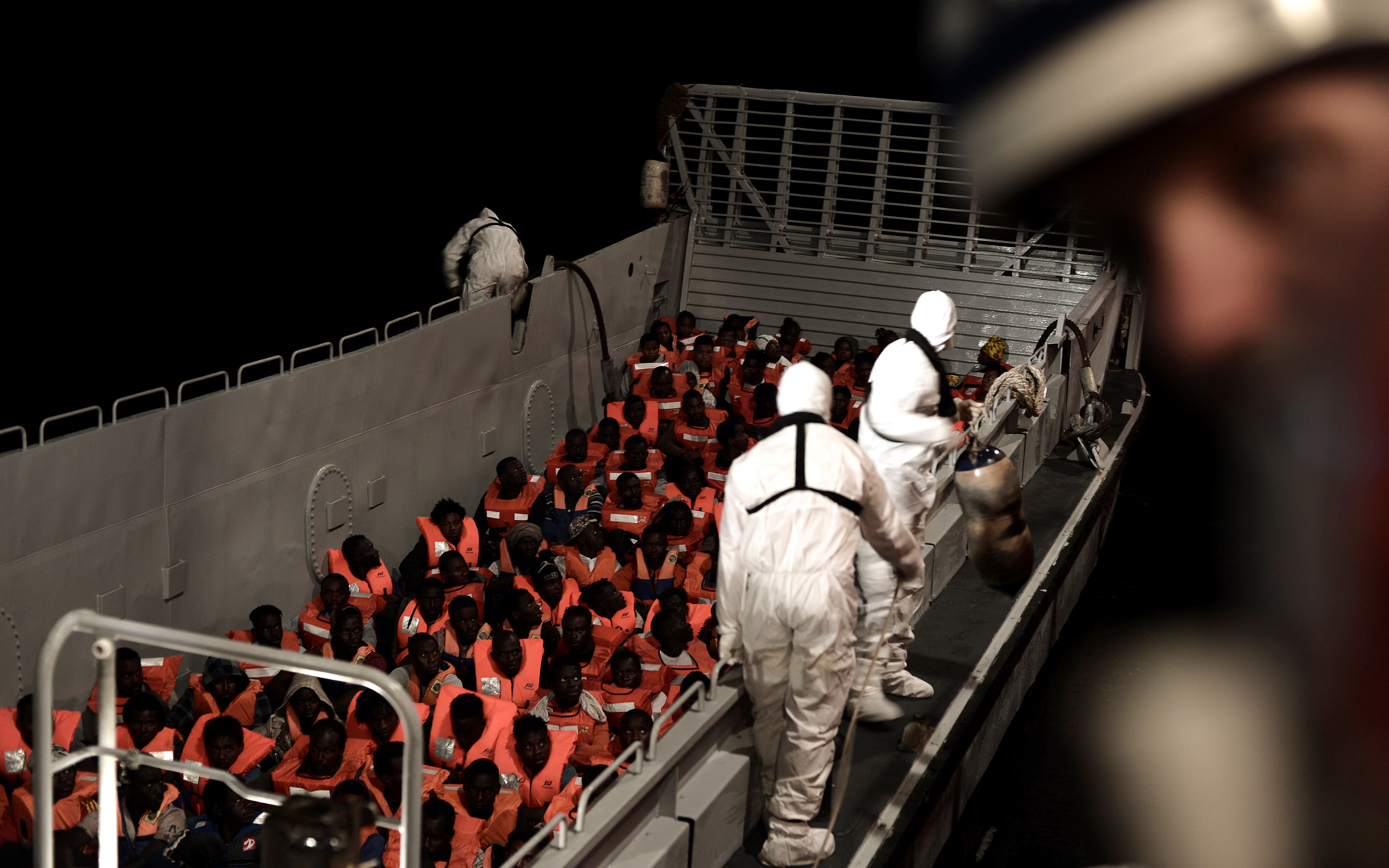 Migrants are rescued by staff of the MV Aquarius search-and-rescue ship, run in partnership between SOS Mediterranee and Medecins Sans Frontieres, in the central Mediterranean Sea on June 10, 2018.

ROME - As Italy&39;s new populist government cracked down on foreign NGO boats operating in the Mediterranean on Saturday, the Italian coastguard has followed suit telling boats in Libyan waters to "turn to" Libya when in distress.

According to the Italian media the national coastguard sent a message to rescue boats operating in the Mediterranean advising them that Italy would no longer be their first point of reference.

"From now on, under the Solas Convention (Safety of life at Sea), captains who are at sea in the area in front of Libya will have to turn to the Tripoli Centre and the Libyan Coast Guard for help."

The announcement came as Italy and Malta once again locked horns over who should take charge of a German NGO boat, carrying over 200 migrants, currently stranded in the Mediterranean.

Both countries have staunchly refuse to let the ship into their ports.

The latest Italian message represents a change in policy from the coastguard which has often played an important role coordinating migrant rescue missions in the Mediterranean outside of its search and rescue area.

Under maritime rules, as coordinator, it has the obligation to provide a safe port for migrants to disembark.

Italy&39;s defence minister Elisabetta Trenta later said that the new stance did not mean Italy would shirk on its international commitments.

"The government has taken a strong position," on immigration, she said in an interview with SkyTG24.

"But it is a position that will never deny migrants their rights. Italian navy and coastguard boats, when there is a need, will always save a migrant in difficulty."

"That&39;s international law" she added. "It&39;s what our navy and coastguard have always done."

Referring to the coastguard&39;s announcement, Trenta said: "We are talking about the section of the sea that is close to Libya, which has been delimited and that we call the Search and Rescue area (SAR)."

"There, the Libyan coastguard is in charge and has been trained by our coastguard to carry out this task. It has all the skills and the means to do so," she said.

She added however that the Italian government was studying the possibility of providing "other means and equipment to strengthen the Libyan coastguard&39;s activity"

"What is important is that the Libyans are able to control their territory," she said

Trenta was speaking on the eve of a mini-summit in Brussels as tensions flare between EU nations over the issue of migration.

Sixteen EU leaders are to meet to address the thorny issue of how the EU can tackle the renewed influx of migrants and refugees seeking a new life in Europe.

On Saturday, French President Emmanuel Macron infuriated Rome by suggesting that Italy was not going through a "migration crisis."