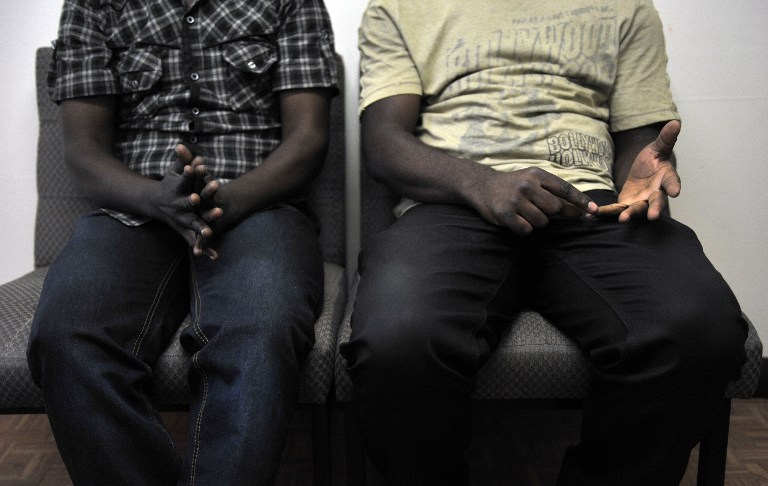 This picture taken on January 12, 2012 shows a gay couple, who wish to remain anonymous, who fled deadly persecution in their home country due to their sexual orientation.

ABIDJAN - No kissing, no petting. As gay bars go, this one is pretty well-behaved. But the crowd packing the Abidjan venue is relaxed and happy to be part of this haven of tolerance on a hostile continent.

"In a gay club, we are much freer than in straight places," said 22-year-old student Jacques, looking on as three men sway their hips to Ivorian music on the dance floor.

"We get no strange looks. Here we can unwind, feel at ease and let ourselves go."

One man gently strokes his companion&39;s neck but displays of affection stop there. The strict social codes prevailing in Ivory Coast apply here too.

The patrons include several transvestites, one a 20-year-old teacher who goes by the name Malika, and who has been living as a woman by night and a man by day for the past three years.

"I live with a friend. Out of respect for his other friends and his job, I live as a man under his roof," said Malika, wearing discreet makeup with a short wig and clad in an elegant patterned dress.

"But when I go about my own business, I am the way I want to be."

With bars catering for lesbians, gays and transsexuals, the west African country stands out for its tolerance on a continent where homophobia is not just common but widely enshrined into law.

In Mauritania, homosexuality is punishable by death.

"It&39;s no paradise here, but it&39;s a lot better than in other countries," Malika said.

The picture is far from rosy, though: one of her transsexual friends found it difficult to get hospital treatment after she was stabbed in the chest.

Moussa, who manages one of the three gay bars in Ivory Coast&39;s economic capital, told of insults from passers-by and threats from the owner of the premises to withdraw the lease.

And yet, in Abidjan, it remains possible to be gay -- making it something of an El Dorado for gays from elsewhere in Africa, in Malika&39;s words.

That was certainly the case for Marinette, a bisexual woman who felt "threatened" in her hometown in Cameroon after several lesbian relationships, and came to Abidjan to sample the freedom of the city.

"This is nothing like my country, where one of my friends was threatened with rape because she had never slept with a guy," said the young woman in her 30s, in a body-hugging red dress.

What makes Ivory Coast so much more tolerant than neighbouring countries, where homosexuality is often perceived as deviant and shameful?

"Because we have not yet been subjected to homophobic legislation," argued Fabrice, who handles judicial affairs for Alternative Cote d&39;Ivoire.

A government official suggested that Ivory Coast, which is recovering from a bloody political and military crisis that ended in 2011, had more pressing matters to address than its citizens&39; sexual orientation.

"There is considerable unemployment, and organised crime on a large scale. At the end of the day, homosexuality is a minor issue," agreed Fabrice.

Even in country villages, where tradition reigns strong, homosexuality is "stigmatised without going too far", he said.

"There can be criticism, and verbal abuse, but it&39;s hardly sharia law."

Yet for all that gays, lesbians and transsexuals lay claim to a degree of freedom in Ivory Coast, many still choose to keep their sexuality under wraps.

"Tonight, everybody is gay," said Armand, a 32-year-old waiter at the bar. "But tomorrow morning, we&39;ll pretend we don&39;t know one another. Everyone hides who they are."