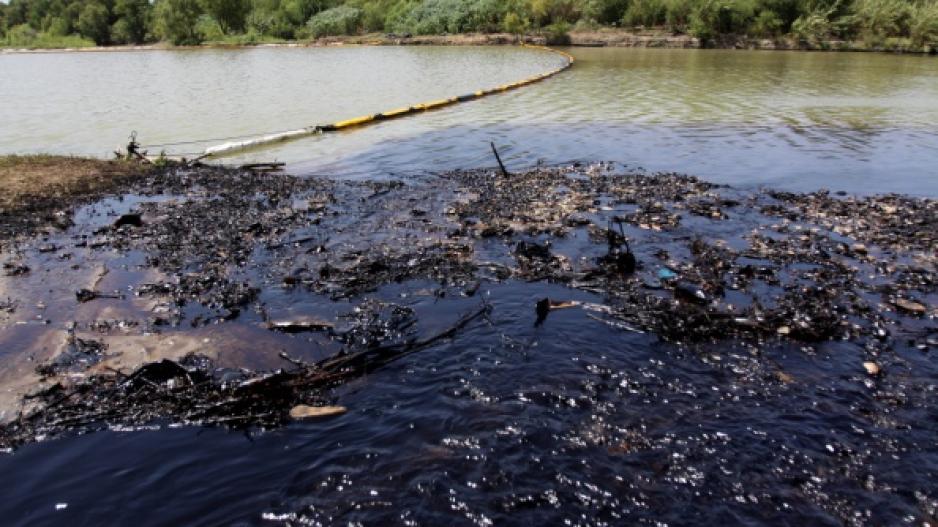 View of the San Juan river after an oil spill caused by a clandestine taking in a pipeline in San Juan Cadereyta, Nuevo Leon state, Mexico

AMSTERDAM - Lawyers for tens of thousands of victims poisoned by a 2006 toxic spill in the Ivory Coast on Wednesday called for the company behind the dump to pay compensation at the start of a new legal battle.

The multinational firm Trafigura "acted badly in disposing of its waste in the Ivory Coast" and "must pay," lawyer Bojan Dekker told an Amsterdam court.

The judges must first decide whether they are capable under Dutch law of hearing the class-action suit brought on behalf of a foundation which says it "represents 107,000 victims".

In August 2006, toxic residues on board the Panamanian-registered Probo Koala freighter were prevented from being offloaded for treatment in Amsterdam's port.

The ship was instead sent to Abidjan, where the waste was dumped on the city's garbage sites and in at least 18 locations.

"Trafigura should never have disposed of its waste in Abidjan and its surroundings," said Albert Knigge, a lawyer for the now Singapore-based company.

"We don't want to in any way minimise what happened," he said, but the "victims' suit cannot be heard as the foundation which represents them is not legitimate."

The Dutch Foundation for the victims of the Ivory Coast toxic spill "is said to be solid, but we have seen a multitude of errors in its composition," Knigge said. He alleged the Ivorians that the foundation collaborates with have a "financial interest" in the affair, even though it presents itself as a non-profit organisation.

Many of the Ivorian lawyers, as well as the local leaders of the foundation and their Ivorian contacts in Abidjan see it "as a way of escaping from poverty," he claimed.

But lawyers for the victims hit back charging that Trafigura had "fraudulently sought to change witness statements."

It is the latest in a slew of legal actions brought against the commodity trader Trafigura - which used to have headquarters in The Netherlands and Switzerland.

Last year a similar suit brought by a different foundation was thrown out, when judges from the Amsterdam District Court said they were unconvinced by the claim and could not determine whether that body really did represent the victims.

The new court is due to rule within the next six weeks on whether or not it can take up the case.

Trafigura has always denied any link between the waste and the subsequent deaths and wave of sickness. It has never been found guilty in a court of law for the events of 2006.

In 2007 however, it agreed on a settlement with the Ivorian government for 152 million euros, while a second out-of-court settlement was agreed in 2009 for 33 million euros involving 30,000 people to be paid in Britain.