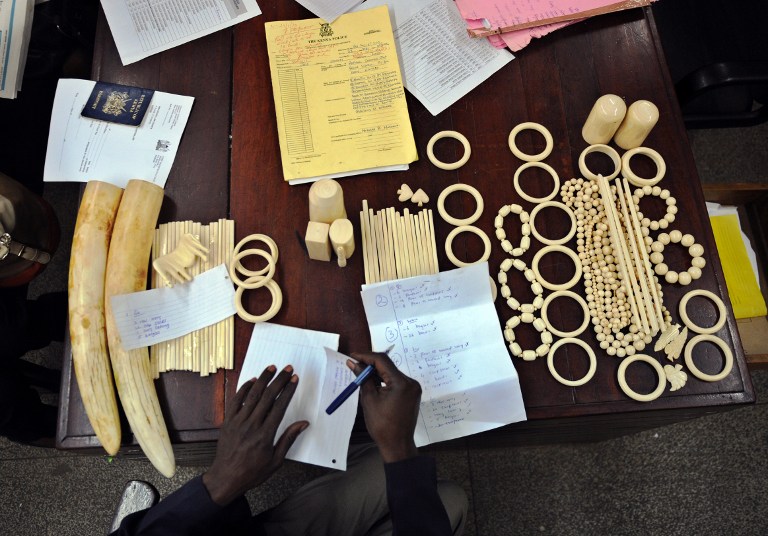 A file photo taken on January 29, 2013 shows a police officer cataloguing illegal ivory ornaments and tusks found in the possesion of Chinese nationals in a court in Nairobi.

MOMBASA - A Kenyan court Wednesday charged a suspected kingpin of the illegal ivory trade, who was on Interpol&39;s most wanted list and described as an "environmental criminal", with smuggling tusks.

Kenyan national Feisal Mohammed Ali, who featured on an Interpol list of nine most wanted suspects linked to crimes against the environment, was arrested in Tanzania on Monday.

He was charged in a Mombasa court with dealing in wildlife trophies "contrary to... the Wildlife Conservation and Management Act".

Ali, who pleaded not guilty, will remain in custody until December 30 when a bail hearing is set.

Ali had faced charges in the port city of Mombasa for "dealing and possession of elephant tusks" weighing more than two tonnes, an amount that would represent at least 114 poached elephants, found during a raid in June.

The prominent Mombasa businessman, sporting a salt-and-pepper beard, arrived in the court in handcuffs. He was extradited from Tanzania earlier in the day.

Two alleged accomplices, Abdul Halim Sadiq and Ghalib Sadiq Kara, were arrested then, but Ali managed to escape. According to an Interpol source, Ali was caught in a "sting operation" conducted in conjunction with Tanzanian police.

He is the second of the nine alleged "environmental criminals" listed by Interpol to have been arrested since the appeal last month.

Earlier this month, Zambian national Ben Simasiku was arrested on charges of possessing ivory from Botswana.

Police investigator Said Kitur said Ali would also be probed for terrorism links as the proceeds of the illegal ivory trade are often used to finance unrest and violence.