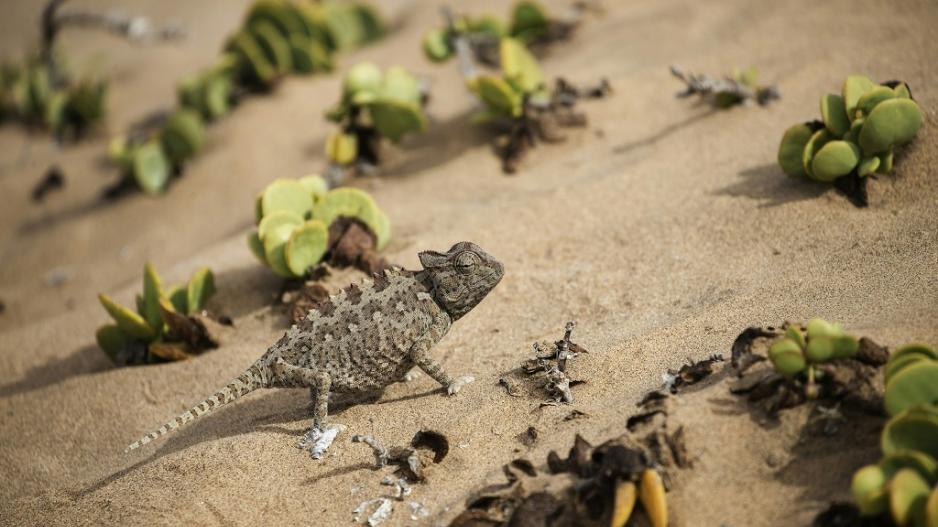 A lizard in the desert in Namibia.

WALVIS BAY, Namibia - Charmed is the tourist who visits Namibia. And like more and more foreigners, Anouk Den Otter took the plunge and travelled to the southern African country to marvel at its legendary natural beauty.

In the middle of the southern hemisphere's winter, Den Otter and her new husband defied the cold to canoe through a seal reserve to celebrate their honeymoon.

"It's really nice so far," said the 29-year-old Dutch woman as she clambered out of their boat on a beach in Walvis Bay, a port town on the country's west coast.

"The people are very nice and the nature is very good."

Den Otter, who works in a hotel in Amsterdam, says that she stumbled across southern Africa by chance while seeking travel inspiration.

"We wanted to go somewhere with no rain in June. I checked on the internet the best places to go, and Namibia was among them," she said. "It has got a combination of everything -- the sea, the cities, the desert, game."

Jolie filmed the 2003 blockbuster "Beyond Borders" in the country, returning in 2006 to give birth to daughter Shiloh Jolie-Pitt in Swakopmund in the west.

The high-profile attention made Namibia an outsider favourite for travel agents the world over almost overnight.

'Tourism is a critical pillar'

And caught in the grip of a global economic downturn and the related slump in commodities prices, the Namibian government decided to use the limelight to boost tourism as part of a wider effort to diversify the economy.

Among those to benefit from the renewed efforts to develop the sector is Jeanne Meintjes who runs a kayak tour business in Walvis Bay.

"Tourism has grown over the years -- more and more people enjoy doing kayaking," said Meintjes, 60. "Tourists always say the open spaces with so few people make Namibia so special. I have no worries for the future, I just need the seas."

For the past decade growth in tourist numbers has been modest but consistent. In 2015, nearly 1.4 million foreigners visited Namibia.

The steady increase has already made tourism the country's third largest sector, bringing in more than 15 billion Namibian dollars (R15billion) annually -- 20 percent of the country's GDP -- behind only mining and fishing.

In 2013, 22,500 people were directly employed by the tourism industry, and some 90,000 people were involved indirectly -- 16 percent of the working-age population -- according to official statistics.

"Tourism is a critical pillar of the Namibian economy and has transformed the lives of many Namibian citizens -- particularly those in rural areas," said Pohamba Shifeta, Namibia's tourism minister, who added that the weak local currency had made Namibia attractive to North American and European tourists.

"The tourism industry continued to grow and remain one of the strongest performing sectors despite the negative economic situation."

Etosha national park in the country's north is often high on the list of must-sees for foreign visitors.

As are Luederitz in the southwest and the abandoned mining town of Kolmanskop, Fish River canyon and the sandy dunes of the Dorob national park.

And unlike neighbouring Botswana where tourism is defined by five-star game lodges and champagne safaris, Namibia has not opted only to grow luxury tourism.

"Namibia is offering something for everyone. When I'm a backpacker I can come in here and stay at an affordable lodging. If I'm an everyday person who wants to do extraordinary things, I can come to Namibia," said Paul Brinkmann, head of the Namibia Tourism Board. "If you do that in Botswana, if you want to do it properly, you have to be mega-rich."