Kabila refuses to step down amid unrest 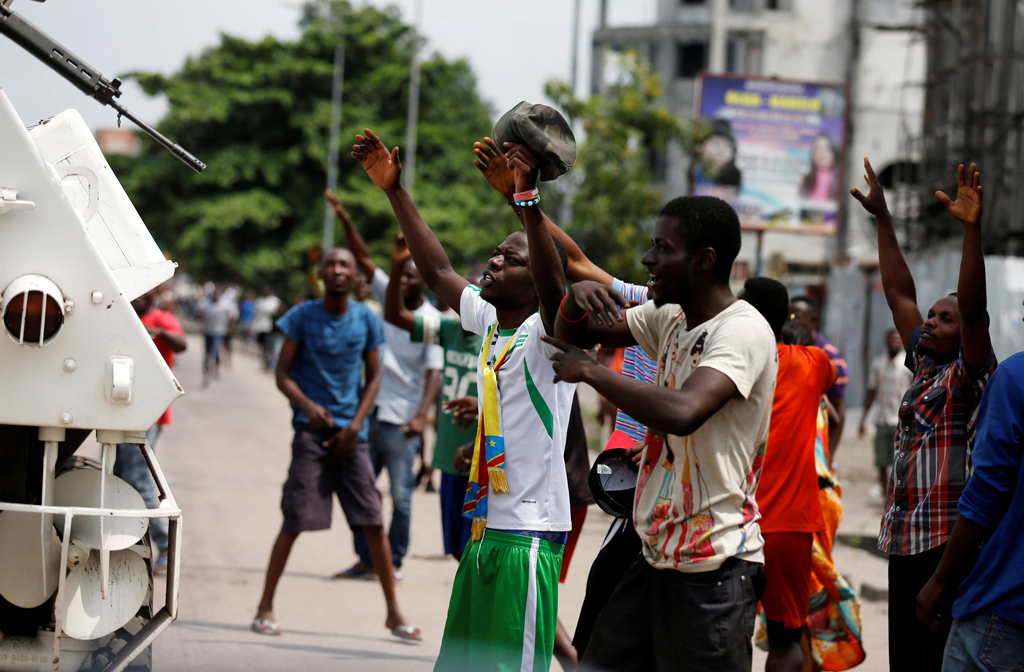 Residents chant slogans against Congolese President Joseph Kabila as peacekeepers serving in the United Nations Organization Stabilization Mission in the Democratic Republic of the Congo (MONUSCO) patrol during demonstrations.

JOHANNESBURG – Democratic Republic of Congo (DRC) President Joseph Kabila is refusing to step down, despite the expiry of his mandate on Tuesday.

The capital Kinshasa remains tense with reports of gunfire in parts and a continuing black-out on social media to prevent political activists organising protests.

Shots rang out in several parts of the sprawling city of 10 million, especially in two northern quarters after whistles – an opposition sign of protest – were heard in several areas, AFP reported on Tuesday morning.

Demonstrators blew whistles and beat on improvised drums, their gesture for a red card, asking the 45-year-old who has led the Democratic Republic of Congo since 2001 to quit the top job.

An explosion was heard near the presidential palace as residents also reported the sound of teargas being fired while Monday’s heavy police and military presence continued into Tuesday.

Overnight state television announced the formation of a new government following an agreement between Kabila’s administration and a fringe opposition group.

The new cabinet will be led by Sami Badibanga, a defector from the party of the mainstream opposition party led by 84-year-old Etienne Tshisekedi.

Meanwhile, the UN human rights office in Congo said 28 people were arrested in Kinshasa on Monday and 46 in the eastern cities of Goma and Bukavu.

Secretary-General Ban Ki-moon condemned the killing of a peacekeeper from South Africa deployed with the United Nations Stabilisation Mission in the Democratic Republic of the Congo (Monusco) in North Kivu on Monday.

In a statement the UN Secretary-General called on the “authorities of the Democratic Republic of the Congo (DRC) to ensure that this attack is investigated and its perpetrators are brought to justice. He underlined, once again, that attacks against UN peacekeepers are unacceptable”.

READ: UN mission in the DRC braces for clashes as leader's term ends

The peacekeeper was killed in Butembo during an exchange of fire with suspected combatants of a Mayi Mayi armed group. Two other peacekeepers from South Africa were also injured, the statement added.

Monusco said a member of National Police was also killed.

Maman S Sidikou, the Special Representative of the Secretary General and head of Monusco, also strongly condemned the militia attack.

“Underlining that attacks against peacekeepers are considered a war crime and that perpetrators will be held accountable, Sidikou reaffirmed that this heinous attack would not undermine the commitment and determination of Monusco to fulfill its protection of civilians and neutralisation of armed groups mandate,” said the Mission in a statement.

Ki-moon and Sidikou expressed their deepest condolences to the families of the dead as well as to the governments of the DRC and South Africa.