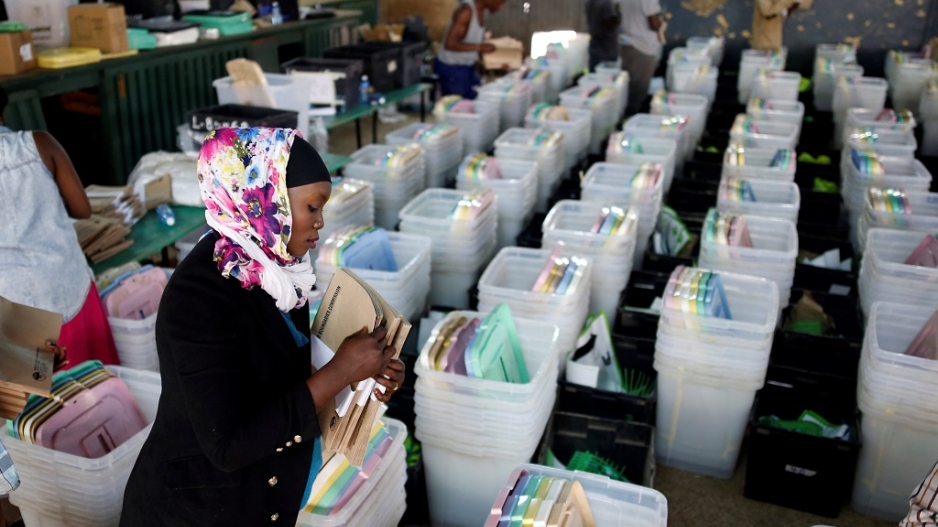 A Kenyan election tallying officer stuffs voting material into ballot boxes before they are transported to different polling stations in the Kibra Constituency at a tallying center in Nairobi, Kenya 6 August 2017

NAIROBI - Observers piled pressure on Kenya's election commission Thursday to finish publishing results forms from every polling station, a day after the opposition said it would challenge the presidential outcome in court.

Defeated opposition leader Raila Odinga claims the electronic results were hacked and manipulated to hand victory to incumbent President Uhuru Kenyatta and plans to take his complaint to the Supreme Court.

The failure of the Independent Election and Boundaries Commission (IEBC) to publish all 40,883 "34A" forms, as required by law, makes it impossible to verify the presidential result, which last week gave Kenyatta 54 percent of the vote.

The Carter Centre election observation mission, headed by former US Secretary of State John Kerry, said it "urges the IEBC to finalise the posting of the 34As as expeditiously as possible."

"Access to official results data is critical for interested parties so that they can cross-check and verify results, and exercise their right to petition if necessary."

Using an electronic vote tallying system, officials at polling stations used tablets to send their figures to the national counting centre in Nairobi.

According to law, scanned forms were meant to accompany these.

Odinga, the leader of the opposition National Super Alliance (NASA), has until Friday to lodge his complaint at the Supreme Court.

The election commission says it has posted online scans of all "34B" forms - which are put together in 290 constituencies from the tallied 34As.

All form 34Bs are now available to the public. Check for your constituency here: https://t.co/sSTNXqZv98 #ElectionsKE2017

However, more than a week after the vote nearly a quarter of the 34As have still not been made public, according to an analysis of the current data seen by AFP.

"Publishing results by polling station is an internationally recognised means to ensure transparent electoral processes and increase public confidence in the integrity of the results," the Carter Centre said.

The National Democratic Institute (NDI) observer mission said publishing the all the forms is an "urgent matter in light (of) the seven-day time limit to file legal challenges" after Friday's announcement of the presidential result.

The NDI said publication of the forms is "vital to public confidence in the election process".

The European Union observer mission also called on the IEBC to "promptly publish" the forms to "enable all stakeholders to examine the accuracy of the announced results and point to any possible anomalies."

This is the fourth time Odinga has challenged for the presidency and the third time in a row that he has cried foul.

Violence in the wake of the election has left 17 people dead, but protests abated as Odinga decided to take his grievances to court.