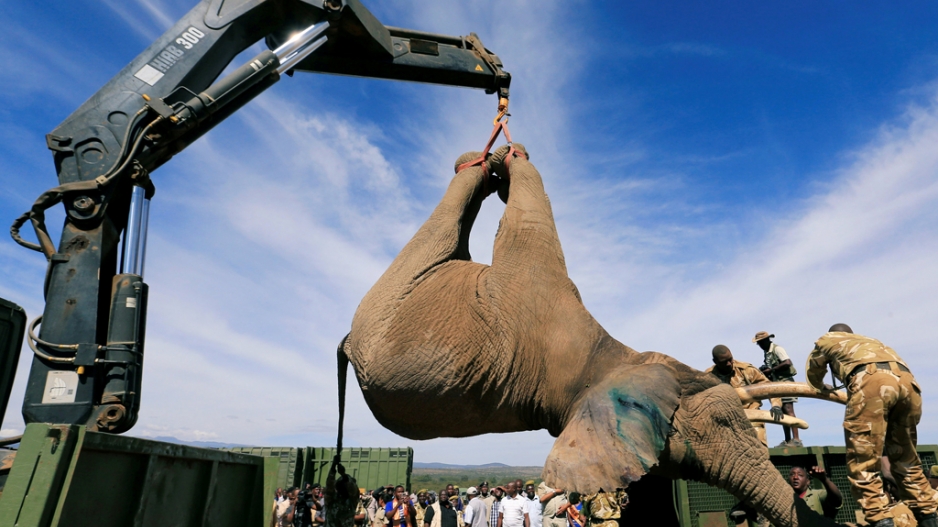 SOLIO RANCH, Kenya - Wildlife officials in Kenya kicked off a relocation operation for 30 elephants on Wednesday, fitting monitoring collars on the tranquilised animals before using cranes to swing them, inverted with bound feet and scything tusks, onto flatbed trucks.

Kenya has several thousand elephants, who face threats such as ivory poachers and habitat loss, but they often raid crops and farms as they migrate between parks, angering villagers who rely on the produce to feed their families.

The Kenya Wildlife Service, which transported the animals from Nyeri county, around 200 km (124 miles) north of the capital, Nairobi, to the Tsavo East National Park in a bid to avert such encounters, estimated the operation cost $6 million.

"In efforts to reduce human-wildlife conflicts, we are relocating some elephants from Solio ranch to Tsavo," Najib Balala, Kenya&39;s cabinet secretary for tourism, who attended the event, said in a Twitter post.

The ranch and the surrounding Lamuria region, home to about 300 elephants, forms part of a migration corridor for the pachyderms between the parks in the country&39;s Mount Kenya and Aberdare mountain ranges.

A fence stretching 400 km (249 miles) in the Aberdare range and another, 200 km long (125 miles), in the Mount Kenya range, are among the strategies wildlife officials are deploying to curb the problem of human-wildlife conflict, Balala added.

Veterinary officers drew blood samples from the elephants for health screening and recording purposes, besides fitting the monitoring collars that give rangers early warnings if the animals stray too close to human habitation.

Elephants destroy crops and trees during nighttime visits to farms, said Lamuria resident Gladys Muriuki, 31, adding that she sometimes saw about 16 elephants roaming her homestead between the hours of 9 p.m. and 4 a.m.

The Kenya Wildlife Service has said elephant numbers have rebounded from a low of 16,000 in 1989, when the world conservation body CITES banned sales of ivory from African elephants. Kenya&39;s Wildlife Service was set up a year later.